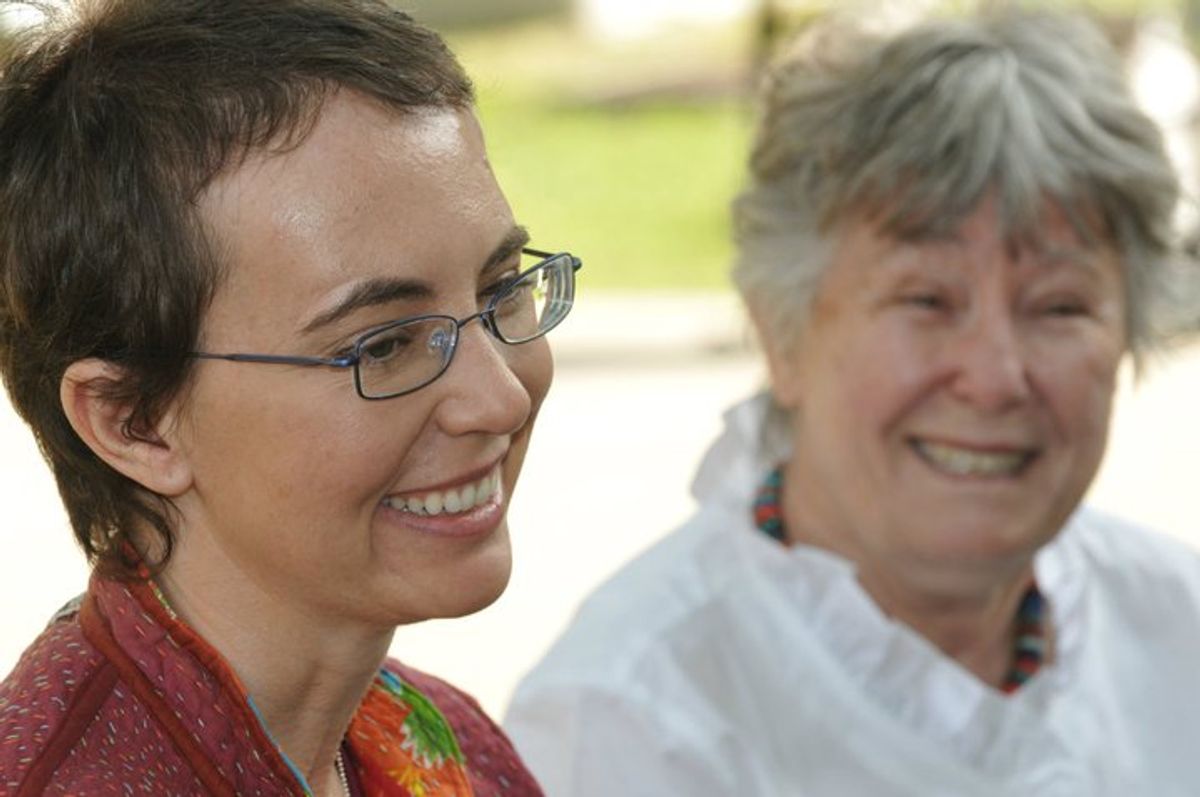 Two photos of a smiling Rep. Gabrielle Giffords were released early Sunday by her office, her hair shorn short but few other telling signs of her gunshot wound to the head.

The Facebook photos, taken May 17 outside her Houston hospital, are the first clear snapshots of Giffords since the shooting five months ago during a constituent meet-and-greet in a Safeway parking lot in Tucson.

The photos showed how far she has come since she was wounded in the left side of her forehead, but her spokeswoman, Pia Carusone, has cautioned that Giffords still has a long way to go in her recovery.

They show the congresswoman outside, the greenery of the hospital lawn in the background. She smiled directly into the camera in one, while in the other she smiled downward as she sat next to her mother, Gloria Giffords.

Giffords has been in a Houston rehab facility since two weeks after the Jan. 8 shooting. Six people were killed and 13 were injured, including Giffords.

Carusone said Friday that Giffords could be released sometime this month.

She said doctors and family are considering "many factors" while making the critical next-step decision to release Giffords from TIRR Memorial Hermann, the hospital where she has been undergoing intensive daily rehabilitation since late January.

But in an interview published this week in the Arizona Republic, Carusone made clear that Giffords remains a shadow of her former self as she has difficulty stringing together sentences and relies heavily on gestures and facial expressions to communicate. She also faces some difficulty in expressing bigger, more complex thoughts, Carusone said.

While Giffords' release from the hospital after five months of intensive inpatient therapy will mark an important step in her recovery, she still must undergo months of outpatient rehabilitation that will include speech, occupational and physical therapy.

Since the shooting, the only time the public has gotten a glimpse of Giffords was April 27 as she boarded a plane to Florida to watch astronaut husband Mark Kelly launch into space. The grainy footage, taken from afar, showed Giffords slowly but purposefully walk up the airplane's stairs.

The newly released photos, shot by Tucson photographer P.K. Weis just before surgery on her skull, provide a much clearer image.

Since the shooting, Giffords has made remarkable strides, requesting her favorite foods, singing her favorite songs, and relearning how to walk and talk, although she struggles to string sentences together.

In an interview with The Arizona Republic published Thursday, Giffords' Chief of Staff Pia Carusone said Giffords' limited speaking ability has led her to rely primarily on facial expressions and hand gestures to communicate.

"She is borrowing upon other ways of communicating. Her words are back more and more now, but she's still using facial expressions as a way to express. Pointing. Gesturing," Carusone said. "Add it all together and she's able to express the basics of what she wants or needs. But, when it comes to a bigger and more complex thought that requires words, that's where she's had the trouble."

Carusone also said that if Giffords' recovery were to plateau now, "it would not be nearly the quality of life she had before."

"All that we can hope for is that she won't plateau today and that she'll keep going and that when she does plateau, it will be at a place far away from here," she said.

Jared Lee Loughner, 22, has pleaded not guilty to charges stemming from the shooting and is being held at a Missouri facility. A judge declared him incompetent to stand trial, but prosecutors hope his competency can be restored so he can answer for the charges.