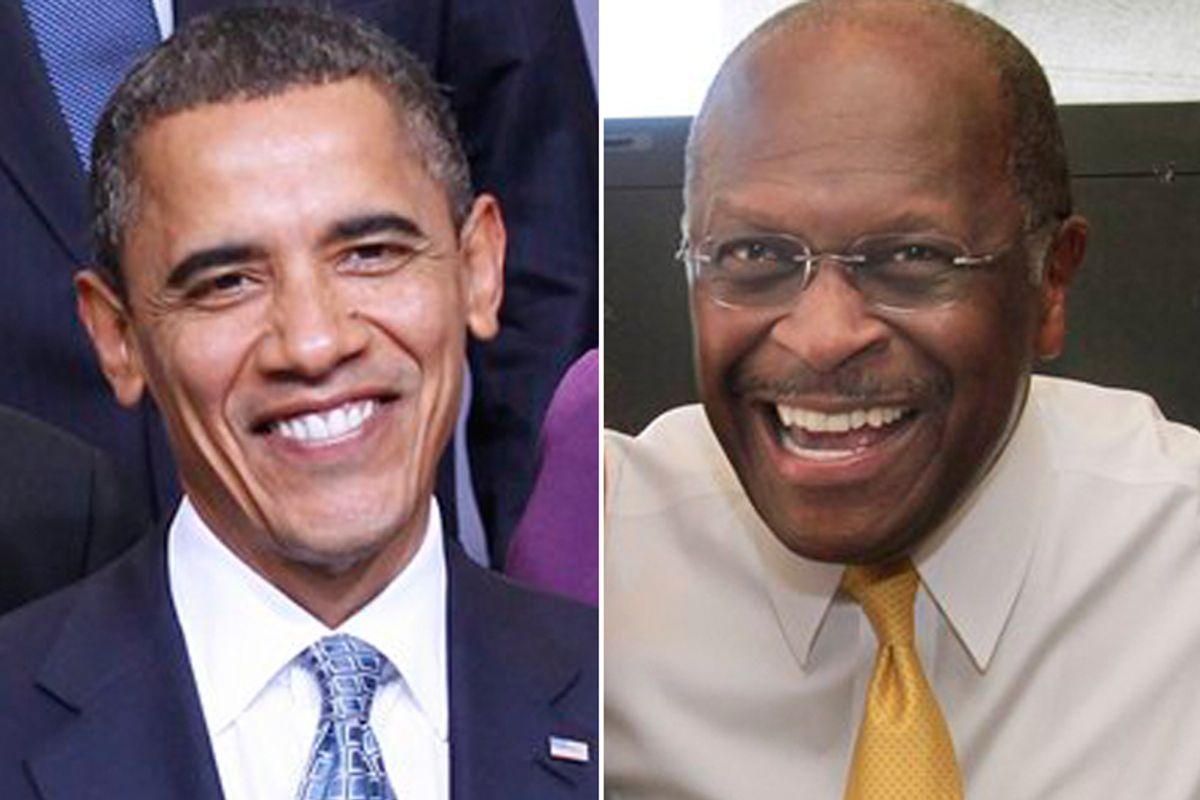 It has been quite a week for Herman Cain, and yet somehow it is still only Monday afternoon. He is still in favor of loyalty tests for hypothetical Muslims serving in his administration, which is sort of constitutionally problematic. Dave Weigel caught him answering a question about how it is being a black Republican:

Herman Cain was born in Memphis in 1945 -- when he says he's seen racism, he means he's really seen racism. When he says he doesn't see it in the Republican party, I also believe it, because he is a famous Black Conservative, and the GOP loves its famous black conservatives, and treats them very well. This video captures how very charming and likable Cain is, which is, obviously, a huge part of his appeal. The other part of his appeal is the fact that he'll tell anyone who'll listen that he's blacker than President Obama, and is also living proof that the conservative movement and the Tea Parties aren't racist. He literally tells his mostly-white audiences: "You are not racist!" You can imagine how much old white conservatives enjoy hearing that.

Cain is basically running on the fact that his candidacy would "take the race card off the table." Conservatives hate the "race card." In his interview with Jeffrey Goldberg, Cain again asserts that he is more authentically black than President Obama, because he's older, and never spent any time in some other country:

“Barack Obama is more of an international,” Cain said. “I think he’s out of the mainstream and always has been. Look, he was raised in Kenya, his mother was white from Kansas and her family had an influence on him, it’s true, but his dad was Kenyan, and when he was going to school he got a lot of fellowships, scholarships, he stayed in the academic environment for a long time. He spent most of his career as an intellectual.”

I left unasked the question of whether it’s more disreputable to be Kenyan or to be an intellectual (and let us pity those suffering Kenyan intellectuals). But I suggested to Cain that while Obama had, in fact, spent four years of his youth abroad, it was in Indonesia, not Kenya. To which Cain, who has dallied with the fading phenomenon known as “birtherism,” responded, “Yeah, Indonesia.”

Oh, also: Herman Cain says he'll make foreign policy decisions based on whether it would be safe to send pizza delivery drivers into black neighborhoods. That is basically what I got from this Daily Caller piece.

“When I first became president of Godfather’s Pizza, there was a very dangerous part of town in the black community where I wouldn’t allow my restaurants to deliver because we had kids beat, robbed,” he said in an interview outside a pizza joint here Sunday. “And I said ‘if I won’t send my son over there, I’m not going to send someone else’s son or daughter over there.’ Last week in Omaha, Nebraska, that same neighborhood that I wouldn’t deliver in — that they are delivering in now — a Pizza Hut driver was killed.” Continuing, he said: “When I get ready to make a decision relative to foreign policy I will make a decision based upon as if I’m sending my own kids, sons and daughters, into war. I’m not going to do that lightly.”

Which part of which town is he even talking about? Cain was in charge of almost a thousand restaurants, across the country. Aren't delivery zones the sorts of decisions he left up to individual franchise managers? And, also, what? He will only send our troops into safe neighborhoods? That sort of defeats the purpose of having an armed forces! I mean I am totally fine with this idea, the "no troops anywhere dangerous" foreign policy plan, but I am just not sure if it'll fly with Republican voters. (Obviously the part about being scared of black neighborhoods will resonate with the base, I am just not sure about the rest of it.)