What will happen at tonight's GOP debate

Mitt Romney and Newt Gingrich join the pack, and they should both expect some abuse 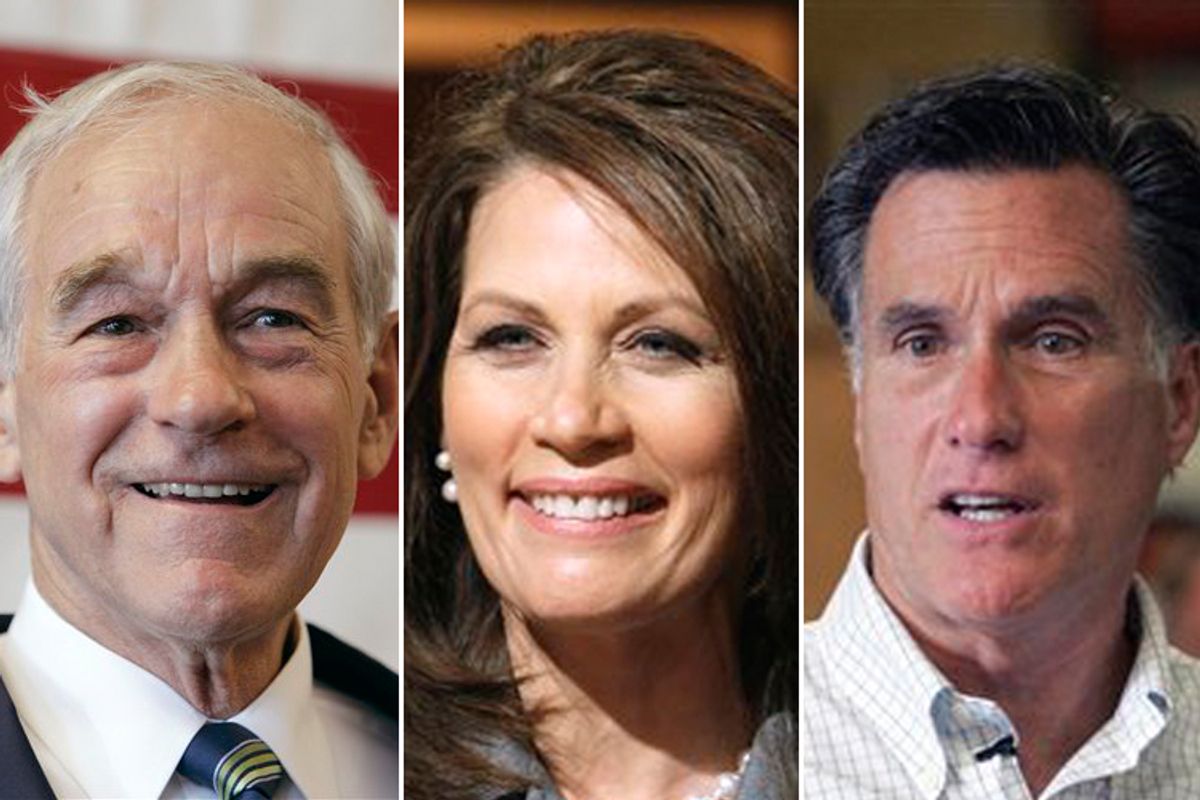 Tonight, most of the Republicans currently running for president (besides Gary Johnson) will meet for a debate in New Hampshire. Mitt Romney, Michele Bachmann and Newt Gingrich will be making their 2012 debate debuts, alongside returning favorites Tim Pawlenty, Herman Cain, Rick Santorum and Ron Paul. It should be hilarious or alarming or both. Here's what to expect.

Everyone will gang up on Mitt Romney

Mitt Romney is the closest thing this race has to a front-runner, and the best way for everyone else to get some attention is to attack him. And he's easy to attack! He invented Obamacare, used to be pro-choice, and recently acted very proud of himself for still believing in climate change. He's also terribly unctuous and phony.

At the Fox South Carolina debate, the candidates were basically instructed to attack the absent Romney. His presence probably won't discourage anyone from going after him again.

Everyone will announce their plan to gut Medicare

Are the candidates going to distance themselves from the controversial "Ryan plan" to replace Medicare with a voucher system? God, no, of course not. They're all going to have a little competition to see who can sound the most "serious" about the urgent need to kill the popular single-payer healthcare plan for our olds. The only person in this crowd even remotely likely to say he supports keeping Medicare as-is is Newt Gingrich, who generally makes sure to only take positions that a majority of voters support. But the last time he declined to endorse the Ryan plan he was pummeled by everyone for heresy.

Everyone will gang up on Ron Paul

This will probably happen during the foreign policy portion of the debate, which I'm sure will be brief, because the GOP doesn't really have a foreign policy anymore besides whining about exceptionalism. The "liberty" thing is pretty hip these days, but endless global war forever never goes out of style.

Michele Bachmann has been a vocal opponent of science and reason for years, so she ought to come out ahead in any climate discussion. She will probably say ridiculous things about CO2 being a wonderful gift from our lord, or something. Herman Cain has probably never given a moment's thought to the ice caps, which is a plus in a GOP primary race.

Even the ones who "believe" in global warming -- just Romney and still possibly Gingrich, though who ever knows with him -- will say that we musn't do anything to combat it, because of our fragile economy, or because of liberty.

Is Tim Pawlenty still the son of a meat-packer?

Will Gingrich or Bachmann embarrass themselves?

This is the real reason why anyone will tune in tonight. Michele Bachmann is a wacky quote machine who will say anything. Newt Gingrich is a lot more professional, but he's also in the midst of a complete campaign meltdown, coming off a week when most of his staff quit and began trashing his wife to every journalist who'd listen.

Gingrich will probably be on his best behavior -- though who is prepping him for this, exactly? -- but you really never have any idea what Bachmann will say. She's never been in a big national debate like this, and it's a bit different from a cable news hit. Sadly, everyone will probably spend more time challenging Romney and Gingrich than trying to fluster Bachmann, but maybe she'll call the moderators socialists, or something.