How to get libertarians hot and bothered: Mention Austrian economist Ludwig von Mises 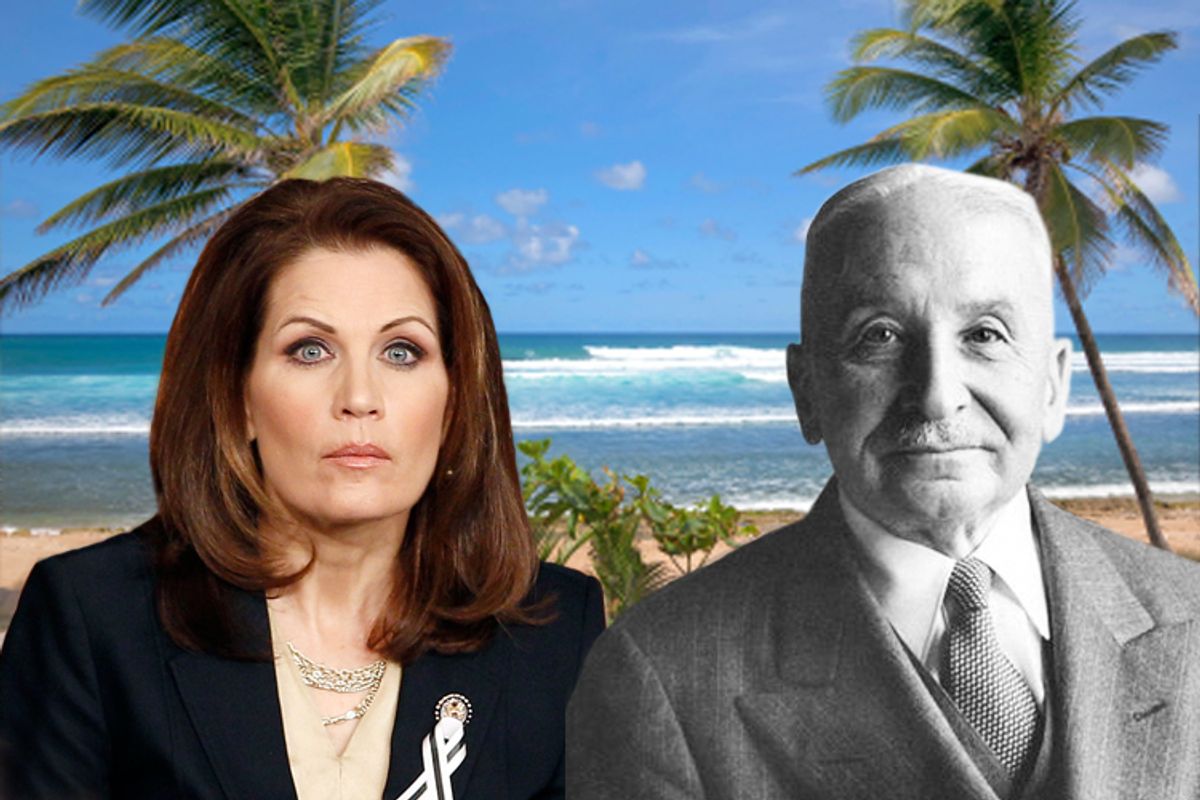 Here's the difference between Sarah Palin and Michele Bachmann. Katie Couric asks Palin what she reads, and the governor of Alaska makes herself into a national laughingstock. The Wall Street Journal's Stephen Moore asks Bachmann a similar question, and the blood starts racing in every libertarian in America. Ron Paul better watch his back.

Ms. Bachmann is best known for her conservative activism on issues like abortion, but what I want to talk about today is economics. When I ask who she reads on the subject, she responds that she admires the late Milton Friedman as well as Thomas Sowell and Walter Williams. "I'm also an Art Laffer fiend -- we're very close," she adds. "And [Ludwig] von Mises. I love von Mises," getting excited and rattling off some of his classics like "Human Action" and "Bureaucracy." "When I go on vacation and I lay on the beach, I bring von Mises."

For those who, unlike the readers of the weekend Wall Street Journal, may be unfamiliar with the intellectual roots of ultra hard-right economic theory, a little context might be in order. Ludwig von Mises, an Austrian economist who moved permanently to the United States during World War II, is probably the most famous name associated with the so-called Austrian school -- a branch of economics that views nearly all government intervention in the economy as utterly beyond the pale. Central banking: forget about it! Fiscal stimulus? Original sin. Taxes? A crime against freedom.

Austrians are hardcore. Imagine Paul Krugman peddling his bicycle, Milton Friedman tootling around town on a Vespa, and then here come the Austrians roaring down Main Street on the gnarliest pack of ape-hanger-styling Harley-Davidson choppers this side of "Sons of Anarchy." And there's Michele, with her arms around the waist of the meanest, nastiest, toughest biker of them all (riding without a helmet, of course, because helmet laws are tyranny!). A Mises name-check to the Wall Street journal is a signal that Bachmann does not intend to mess around. Government -- you're going down!

Mises on the beach! The news is both hilarious and scary. Once you have imagined Rep. Bachmann in her bikini, margarita in one hand, well-thumbed copy of "Human Action" in the other, a wry smile cracking her stern cheekbones as she savors von Mises' earnest and passionate elucidation of the theory that free-market economics are the basis of civilization, there is no going back. If you worship at the altar of laissez-faire capitalism, you have found your high priestess. If you dismissed Bachmann as a lightweight version of Joe McCarthy, think again. There's nothing lightweight about the Austrians.

A quote from "Human Action":

It must be emphasized that the destiny of modern civilization as developed by the white peoples in the last two hundred years is inseparably linked with the fate of economic science.

Never mind the puzzling injection of skin color into the argument. The premise Mises pushes in "Human Action" is that if humanity doesn't believe in and act upon the holy writ as laid down by the Austrian school, civilization is doomed. Mull that one over for a second, while the wind rustles through the coconut palms and the crash of the surf works its hypnotic magic on your soul. And pass me another margarita. The Austrians are coming.