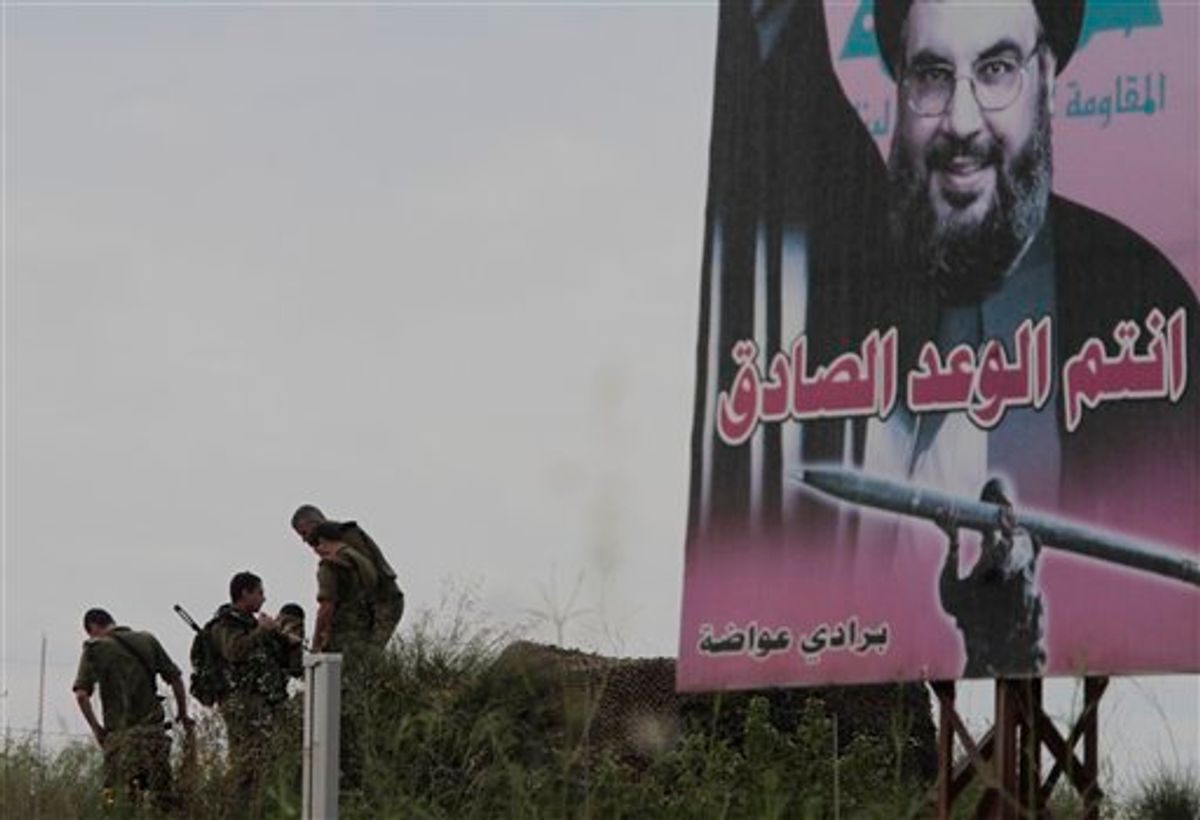 Israeli soldiers, left, take their position in the Israeli border side, as a poster of Hezbollah leader Hassan Nasrallah, right, is seen set at the Lebanese-Israeli border at Kfar Kila village, southern Lebanon, on Friday May 20, 2011. The Israeli army is beefing up its security apparently in anticipation of rallies of Palestinian refugees on the Lebanese-Israel border like the one the accured on Sunday. The Arbic words in the poster read:"you are the truthful pledge".(AP Photo/Mohammed Zaatari) (AP)
--

Five months after Hezbollah and its allies brought down the Lebanese government, the prime minister formed a new Cabinet on Monday that gives the Iranian-backed militant group far more power.

Hezbollah has seen a steady rise over the past few decades from a resistance group fighting Israel to Lebanon's most powerful military and political force.

Opponents of Hezbollah -- which the U.S. considers a terrorist organization -- say having an Iranian proxy at the helm of Lebanon's government will lead to international isolation.

Hezbollah forced the collapse of Lebanon's pro-Western government in January over fears it would be indicted by a U.N.-backed tribunal investigating the 2005 assassination of former Prime Minister Rafik Hariri. Hariri's son, who was prime minister at the time, was forced from office when he refused to withdraw support for the investigation.

Hezbollah's favored candidate, Najib Mikati, was named the new prime minister. But Mikati has struggled to form a Cabinet, insisting that he would not be beholden to the militant group's demands.

On Monday, Mikati announced a Cabinet that gives Hezbollah and its allies 16 of the 30 seats. In the previous government, they had 10 seats.

The Cabinet still must be formally presented for Parliament for a vote of confidence.

Mikati urged the Lebanese to give the government a chance to prove itself.

"Do not judge intentions and people, but rather actions," he said during a televised news conference.

Hezbollah denies any links to the killing of Rafik Hariri and calls the court a conspiracy by the U.S. and Israel. The group and its allies walked out of the previous government when then-Prime Minister Saad Hariri -- the slain man's son -- refused to denounce the tribunal and cut off Lebanon's 49 percent share of the funding for it.

Many fear Hezbollah will react violently if its members are indicted, as is widely expected.

Mikati was quick to reiterate that his government will respect Lebanon's international commitments, a reference to the international tribunal, suggesting that he will not cut its funding.