Focus of the battle is now shifting to New Mexico 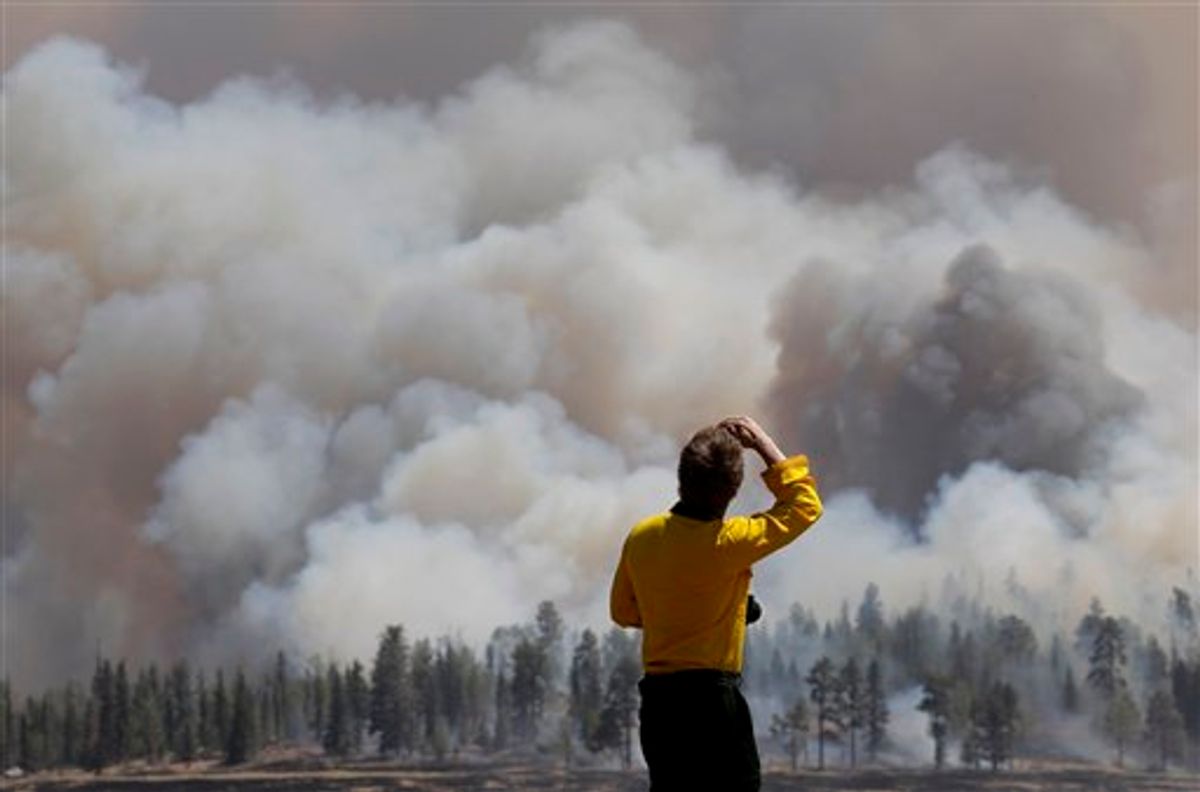 A photographer looks at smoke from a burnout fire as firefighters battle the Wallow Fire in the Apache-Sitgreaves National Forest, Ariz., Sunday, June 12, 2011. Roughly 7,000 residents of two eastern Arizona towns evacuated last week as a wildfire loomed nearby were allowed to return home Sunday as officials expressed confidence that they were making progress in their battle against the huge blaze that has been burning since May. (AP Photo/Jae C. Hong) (AP)
--

The focus of the battle against a massive wildfire burning in eastern Arizona shifted to New Mexico on Monday as crews lit fires around the town of Luna to stop the flames.

Efforts to stop the fire from spreading finally met with success over the weekend as high winds didn't lead to major growth of the blaze that has been burning since Memorial Day.

Residents of two Arizona towns on the northern edge of the fire were allowed to go back home Sunday, and thousands streamed into Eagar and Springerville through the day. Fire crews have stopped its northern advance and are now trying to corral its eastern advance into New Mexico by burning a line in front of the fire that it can't cross.

In Luna, N.M., about five miles from the Arizona line, crews lit fires around the town to keep the flames from getting into town, Catron County Undersheriff Ian Fletcher said Monday. The operation began Sunday night, and the 200 or so residents did not have to leave. Fletcher said an evacuation plan is in place in case the situation changes.

"It's holding, and they're pretty confident this morning," Fletcher told The Associated Press.

"These guys are getting after it, it's kinda neat to see,' he said. "I was concerned earlier, but they seem to have it wrapped up pretty well, or it's going well for them right now."

Several other fires also were burning around Arizona on Monday, and a 2,700-acre wildfire near the New Mexico-Colorado border was threatening about 200 homes and businesses and forced the closure of Interstate 25.

The eastern Arizona fire had grown to 706 square miles by Monday morning, or more than 452,000 acres, and was 10 percent contained. But firefighters have been sounding increasingly confident at their daily briefings that their efforts were paying off.

The Wallow Fire is the second largest in state history, although it has burned only 31 homes and four commercial buildings, a fraction of the largest. That fire was the 2002 Rodeo-Chediski, which burned 732 square miles and destroyed 491 buildings.

Although about 7,000 residents of Eagar and Springerville were allowed to go home, about 2,700 others who live in several Arizona resort communities in the Apache-Sitgreaves National Forest remained under an evacuation order.

The hamlets of Alpine, Nutrioso and Greer were the largest, and fire officials said Monday they were working to make the areas safe for residents to go home, possibly later this week.

The dangers include burned trees that could snap or blow over in winds, said Mark Wade, commanding the fire effort in Greer.

That town, considered the jewel of eastern Arizona's summer havens, lost more than 20 homes as flame moved into the valley last week. It includes lodges and hundreds of old and new cabins, including one owned by U.S. Sen. Jon Kyl, who was forced to evacuate on June 4.

Despite losing the homes and a couple of dozen outbuildings, the fire did not move into the Greer valley itself.

"Greer is not as bad as a lot of people are making it sound to be," wade said.

Other Arizona fires that continue burning include a huge blaze near the southeastern border town of Portal that has burned more than 232 square miles since it broke out May 8. It is about 50 percent contained. Another fire that broke out Sunday outside Sierra Vista near the Coronado National Memorial has forced evacuations.

The southern Colorado wildfire forced the evacuation of a church camp. Crews were attacking the fire near Westcliffe from the air Monday. It broke out Sunday afternoon and spread quickly in dry conditions. In southeastern Colorado, crews are close to containing three large wildfires that broke out last week.

Southbound Interstate 25 south of Trinidad is closed because of a wildfire burning in New Mexico near Raton Pass.

Interstate 25 remains closed through the Raton Pass of northeastern New Mexico because of a wildfire. The highway is closed from Trinidad, Colo., to Raton. New Mexico forestry officials say the Track fire has burned an estimated 2,700 acres.