Neocon flack: Weiner may have converted to Islam 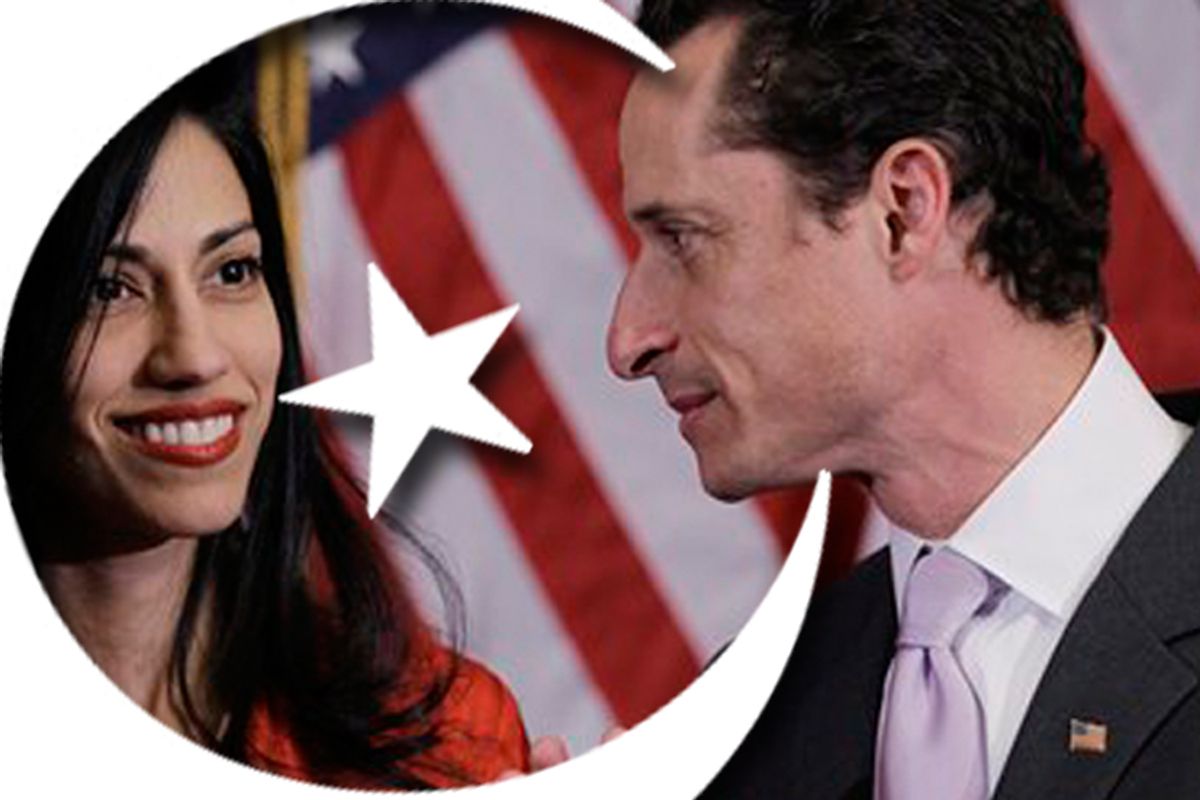 (UPDATED) We thought everything that could be said about Anthony Weiner's lewd photo scandal had been said. But Eliana Benador, a former influential neoconservative public relations operative, has proved us wrong.

Writing for the "Communities" section of the Washingtom Times' website, Benador argues that the Twitter scandal shows that ... the Jewish Weiner might have converted to Islam!

Benador, who is currently the U.S.-based "goodwill ambassador" for a group of Jewish settlers in the West Bank, advances an argument that is fairly difficult to follow, but it seems to go like this: Because a New York imam was quoted in the press seeming to take Weiner's side in the matter, and because Muslims (supposedly) practice deception as part of their faith, it's possible that Weiner is secretly a Muslim convert who is still presenting himself to the world as a Jew.

The Imam of New York has stated: “I would tell her [Huma] to be a little bit patient. In our book, if you think your wife, or husband, is doing something unacceptable, you start by counseling her.”

Counseling? For whom, Huma or Anthony? The Imam’s statement seems to state that Huma is in need.

Regardless, those are words of compromise offered by a leading Muslim Imam trying to make us forget that the Koran actually advocates stoning wives for adultery while turning a blind eye toward the sexual mis-deeds of the husband.

It is also important, when looking at this situation, to remember that observant Muslims practice Taqiyya , an element of sharia that states there is a legal right and duty to distort the truth to promote the cause of Islam. ...

Given the defense articulated by the Imam, which would be offered only for a Muslim man, we must believe this opportunity to remove this Muslim woman from a union with an non-believer would be quickly taken. Therefore we must consider that Mr. Weiner *may* have converted to Islam, because if he did not, we have to consider the unlikely, that being that Ms. Abedin has abandoned her Muslim faith, even while she still practices.

(It's worth noting here that "The Imam of New York" is not an actual title, and she is pretty clearly taking this imam's quote out of context.)

Benador also wonders in the column if Huma has "been groomed to access leading political movers and shakers to advance the cause of Islam in America, including a politically positioned marriage to Congressman Anthony Weiner?"

Benador is no random blogger. She was the president of the now-defunct Benador Associates, a public relations firm that was active in the run-up to the Iraq war getting media exposure for such influential hawks as Michael Rubin*, Richard Perle, Laurie Myrloie, and former CIA director Jim Woolsey. An article in the Guardian described pictures of her at a party with Joseph Lieberman. And one of her clients famously (and falsely) claimed in a 2006 newspaper column that Iran had instituted a Nazi-style dress code for Jews.

The bottom of the "Communities" section notes that "contributors are responsible for this content, which is not edited by The Washington Times." But an editor did apparently delete one paragraph from Benador's column, leaving this note: "(Correction: Paragraph removed for inaccuracies.  Apologies are issued and we regret the error.  The Communities)."

I've asked the Communities editor for comment on what that error was.

In any case, the fact that Weiner married a Muslim woman has long been the subject of rumblings in certain corners of the right-wing blogosphere.

UPDATE: Communities editor Jacquie Kubin tells me that the piece has been taken down for the moment and is currently "under review." We've saved a copy of the original here.

* UPDATE II: Michael Rubin emails that Benador did not help him get media exposure. "Ms. Benador arranged a single speech for me which focused on Iran, not Iraq," he writes, and there was no media at the event. He was described in several news articles in the past decade as a Benador client, and his profile was listed on the firm's site.