Why does Allen West hate the American flag? 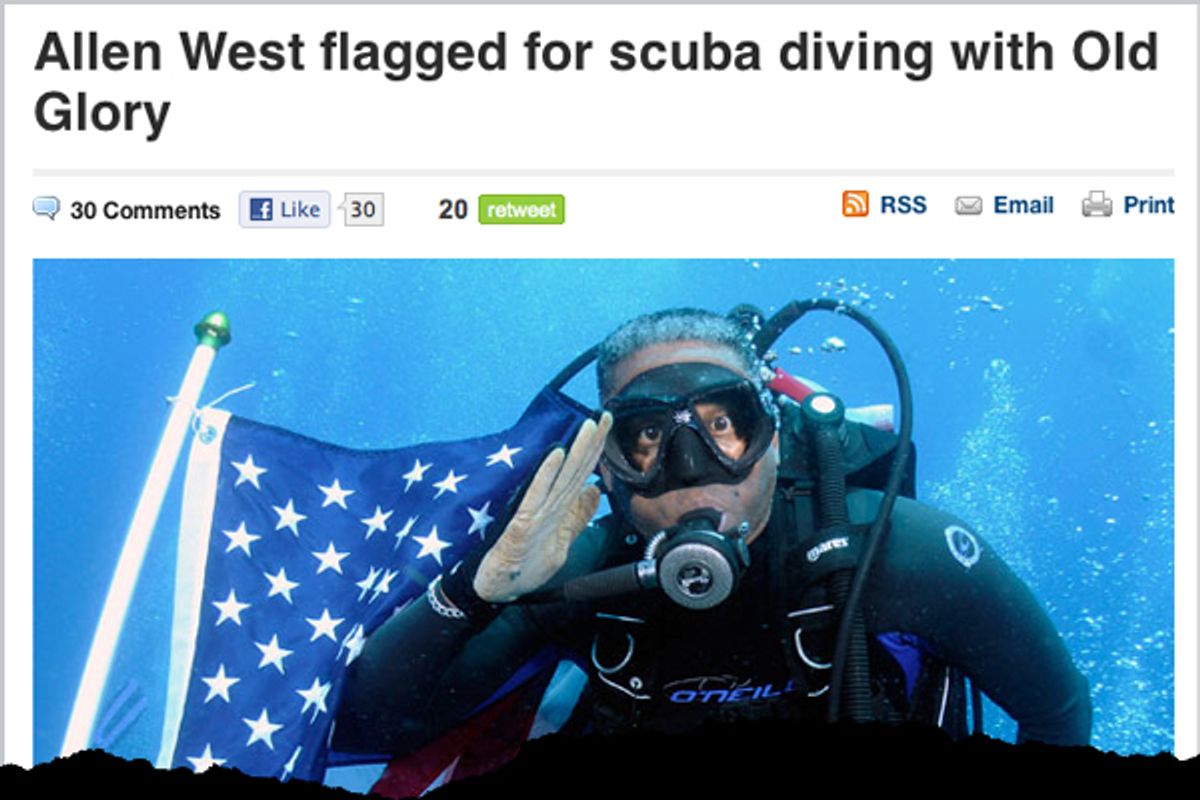 Happy Flag Day! The Second Continental Congress selected the stars and stripes as our official flag on June 14, 1777, and each year on that date we think about flags, or something. (It is a state holiday in Pennsylvania, apparently.) Most liberals hate the flag, obviously, but true American Tea Party Patriots across the nation are all outside saluting and reciting the Pledge of Allegiance, and they will continue doing so until sundown.

Despite the fact that I am a liberal, and liberals hate the flag, I know the basics of Flag Code (don't let it touch the ground, take it inside at night or in bad weather, never fly it below other flags), which I learned from my grandparents. I know that you're not supposed to wrap yourself in it, in a literal sense, and I think it's generally understood that the bit about not letting it touch the ground also includes not taking it ... under water

I, of course, don't care what you do with the flag, because of moral relativism, but these are supposed to be the super-patriots, and their failure to live up to their super-patriotism is embarrassing us before the entire world. West spent 20 years in the Army, he should know Flag Code! (Though I guess he wasn't clear on following "codes" and "rules" when it came to not illegally detaining and abusing Iraqi civilians, so maybe he actually doesn't know that he's done wrong.)

West gave a statement to Politico that skillfully evaded the question of whether or not he knowingly violated United States Flag Code:

"Congressman West participated in an event to bring attention to scuba diving off the coast of his Congressional District," West’s communications director, Angela Sachitano, said in an email to POLITICO.

"He went diving with several disabled veterans who fought to defend the American Flag and this nation. Congressman West displayed the American Flag on an underwater wreck as a sign of respect for the flag and the accomplishment for these veterans who each and every day work to overcome their disability. In addition, Congressman West would like to wish everyone a Happy Flag Day."