The odd world of men pretending to be lesbians

After "Gay Girl in Damascus" is unmasked, one of "her" online colleagues admits: I'm a married man, too 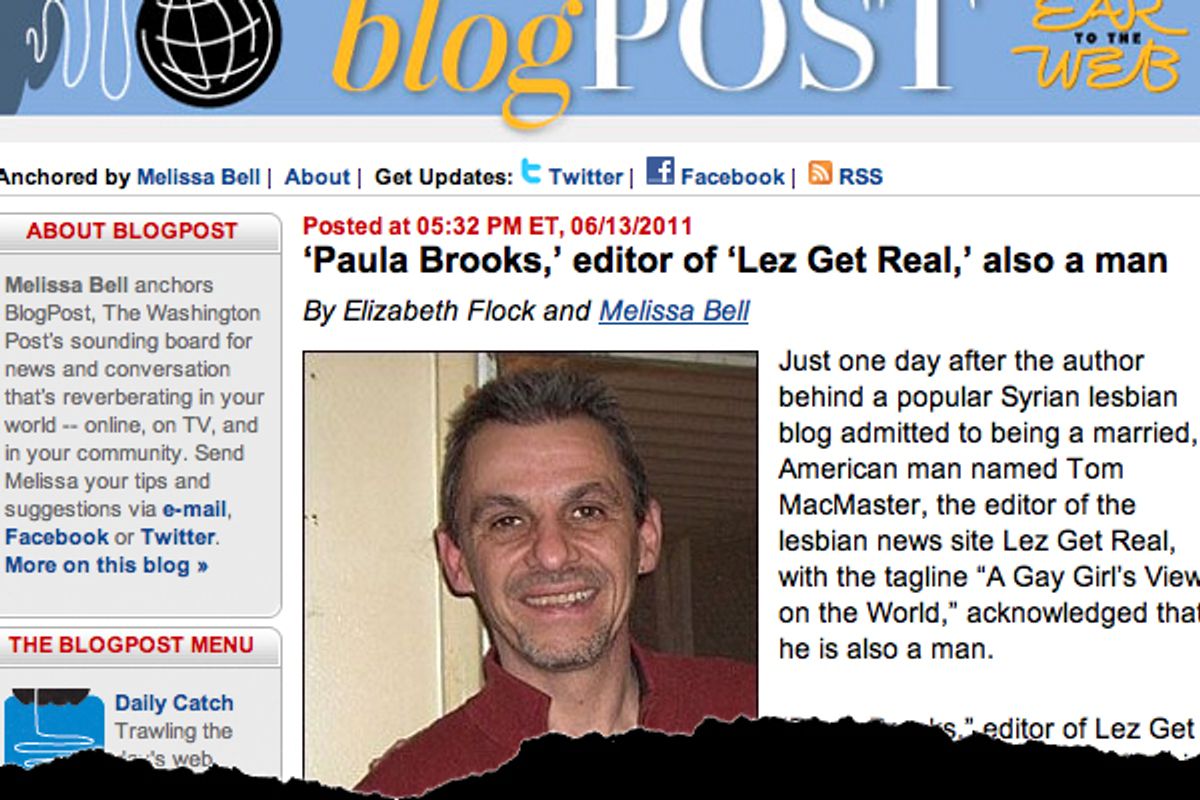 Over the past three days, two influential, self-styled "lesbian" bloggers have been "outed" as straight, married men. Monday -- just a day after Tom MacMaster confessed to being "Gay Girl in Damascus" blogger "Amina Arraf" -- the Washington Post reported that "Paula Brooks" (the LezGetReal.com editor who had originally encouraged "Amina" to start a blog) was actually 58-year-old Bill Graber.

Men posing as lesbians online is nothing new. Some claim it's fairly easy to spot these impostors (an Andrew Sullivan reader notes that she "learned how to spot a dude in a 'women4women' AOL chat room as a teen") -- but clearly, it's not quite easy enough; Graber and MacMaster managed to fool thousands of people, including some of the most respected international media organizations, into thinking they were homosexual females.

The general reaction to the revelation of "Paula Brooks"/Bill Graber's true identity has, perhaps unsurprisingly, been one of anger and frustration. For instance, FemPop blogger Alexandra Hinton writes:

[T]he insult is that Arraf and Brooks were housed in the bodies of perfectly normal, and (I assume) relatively sane men who wanted to find an outlet for their passion and creativity. ... They were cold and calculated constructs designed to reel us in with engaging words. ...

I'm thinking about the implications of these two cases for any actual lesbian who speaks out online. I wonder if "are you really a straight man playing a lesbian?" will become a way to silence certain opinions or voices from us? ... This moves into ugly side of the disembodied nature of the internet. I can see myself learning to hate the dis-embodied-ness of the web because of lies like the ones these two straight men have told.

What motivated Graber and MacMaster to do what they did? In MacMaster's case, his project was born partly of "vanity" -- he told NPR yesterday that he was "extremely flattered and impressed with [himself]" when he realized that his writing was "getting taken seriously" -- and partly of an impulse to experiment with fiction (he says he now recognizes that he took his creative writing project much too far). For his part, Graber claims he simply wanted to draw attention to topics he felt he couldn't write about if people knew he was a straight man. According to the Washington Post's Elizabeth Flock and Melissa Bell:

Graber said he started the site to write about gay issues after seeing the mistreatment of close friends who were a lesbian couple. He said the site was "done with the best of intentions." As a former Air Force pilot, he also said he used the site to argue in favor of the Don’t Ask Don’t Tell repeal.

"I didn’t start this with my name because ... I thought people wouldn’t take it seriously, me being a straight man," he said.

The Rumpus' Brian Spears makes some powerful points in encouraging his "fellow white males" to avoid deceptions of this kind, arguing:

Look, you can claim that "while the narrative voice may have been fictional, the facts on thıs blog are true and not misleading as to the situation on the ground," but you're just rationalizing your dishonesty. ... Don't co-opt the voice of a minority in hopes that people will take your writing more seriously, especially when you belong to the most privileged demographic group on the planet. ... When you claim to be reporting on "the situation on the ground," you've entered into a contract with your readers which includes the promise that you are who you claim to be, especially if you're claiming to be a minority in a dangerous area. ... If you really have something unique and important to report on, your white male-ness will not get in the way of your being heard. In most cases, it will be an advantage, as bylines and television appearances testify every day.

Clearly, this double-deception story raises major questions about the ethics of online interaction -- questions that will no doubt be debated actively in the coming weeks and months. For the moment, however, the blogosphere seems to be thoroughly captivated by the following colorful detail (reported by Bell and Flock in the Post):

In the guise of Paula Brooks, Graber corresponded online with Tom McMaster, thinking he was writing to Amina Arraf. Amina often flirted with Brooks, neither of the men realizing the other was pretending to be a lesbian.