We need a New Deal for information technology 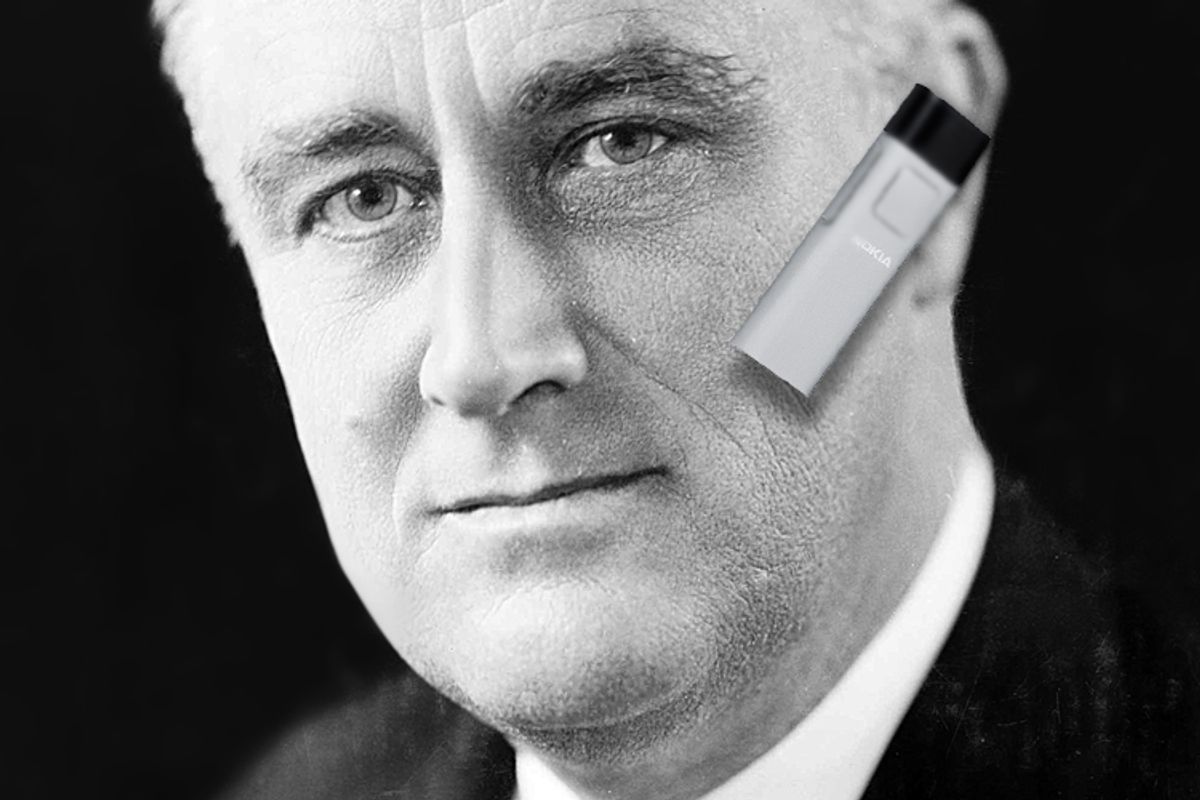 America’s attention is focused on the faltering recovery from the Great Recession. But we cannot neglect another question: Where are we in the long-term technology cycle?

In the mid-20th century, the economist Joseph Schumpeter observed that technological innovation is not a continuous process, but tends to be concentrated in bursts of economy-transforming change. Within the industrial epoch that began in Britain in the 18th century and continues today, historians have discerned three or four or five successive industrial revolutions, driven by "general purpose technologies" like the steam engine, electricity, automobiles and airplanes, and information technology.

Neo-Schumpeterian economists like Carlota Perez have tried to document links between technological innovation and the economy as a whole. They point out that the advent of new technologies often produce stock market bubbles -- something that occurred with canals and railroads, automobiles and the tech industry of the late 20th century. Even though the bubbles pop, they usually leave a legacy of productive investment. That was the case with the tech bubble at the turn of the century, though not with the housing and stock market bubble that followed it.

History shows another pattern: There is often a long time between the invention of a transformative technology and the economic transformation that follows. The automobile was invented in the 1860s, but it did not begin to transform society until the 1920s in the United States, reaching its maturity after World War II. Information technology was developed, largely with U.S. military sponsorship, during World War II and the early Cold War, but the personal computer had to wait until the 1980s and the World Wide Web until the 1990s.

The evolution of a transformative technology can be retarded or accelerated by public policy. In particular, government policy can remove roadblocks on the path to the new technology’s implementation. These can take two forms: infrastructural roadblocks and social roadblocks.

In the steam era, the infrastructural roadblocks were lack of transportation and communication that prevented large markets capable of absorbing the cheap goods made possible by steam-powered factories. Railroads, steamships and telegraphs created the large national or imperial markets that allowed steam-powered machine production to achieve its potential.

The social roadblocks of the steam era were slavery and serfdom, which were abolished in Europe and the Americas between the 1830s and the 1880s. The freeing of people from rural bondage produced wage workers for factories and distributors and urban consumers for machine-made products. The result was a period of prosperity before World War I that followed the turbulent shakeout during the "Long Depression" of the 1870s through the 1890s.

In the succeeding era of electricity and automobility, much of the groundwork for the transformation was laid by the 1920s. But once again the economic potential of the new technologies was stymied by infrastructural and social roadblocks.

The New Deal helped to modernize primitive and inefficient Southern agriculture, by means of rural electrification and the use of tractors and other motorized equipment. After World War II, the interstate highway system allowed the full potential of automobility to be realized.

Meanwhile, the social roadblock of low wages that blocked the full development of electricity-based industries and automobile-based development was removed by the reforms of the New Deal and Civil Rights eras. The minimum wage, limits to work hours, and a high level of unionization, combined with the abolition of racial segregation and several decades of low immigration, raised purchasing power by raising wages. The socialization of risk by programs like Social Security and unemployment insurance helped to promote mass consumption by reducing the need for precautionary savings.

At the same time, New Deal credit policies increased the borrowing power of working-class and middle-class Americans. All of these reforms increased mass consumption of electrical appliances, automobiles and the industries that grew up around them. The result was the boom of the 1950s and 1960s.

Where do we stand today? While potentially transformative technologies like biotech and nanotech and GM foods are still in their early stages, the most recent industrial revolution, based on information technology, is far from complete. IT has grown from an infant into an adolescent. Many of its potential benefits have yet to be exploited, even if investors are impatient for the Next Big Thing.

The situation of information technology today may be comparable to that of the electrical and automobile industries during the Great Depression. The old economy has already crumbled and the next economy is struggling to be born. Information technology has revolutionized some sectors, like communications and business services. But other important sectors, like health and higher education, have yet to be transformed by IT.

If we are to go from today’s version of the 1930s to tomorrow’s version of the Golden Age of the 1950s and 1960s in a decade or two, then, in addition to getting short- and medium-term recovery policy right, we need to get long-term productivity policy right. We need to eliminate the infrastructure choke points and social roadblocks that are blocking the further transformation of the economy by IT.

If we set aside the contested question of energy sources, the major infrastructure roadblocks to the full maturation of IT are found in communications and transportation. In communications, we need universal broadband service at cutting-edge levels of access and quality. In transportation, there is no need to replace the interstate highway system by a subsidy-addicted interstate passenger rail system. A more sensible investment would be a smart interstate highway system, populated by smart cars and smart trucks that talk to each other and the road, reducing traffic congestion and travel times for passengers and freight alike.

Two major social roadblocks block the further development of the IT-based economy: The organization of medicine and higher education as premodern craft industries and the low purchasing power of most service sector workers.

According to American folklore, back in the railroad era a worker named John Henry defeated a rival equipped with a steam-powered jackhammer, only to collapse and die. Today we have John Henry, Ph.D, and John Henry, M.D. In an era when IT is reducing the costs of most services, from office publishing to stock trading, costs have been growing out of control in higher education and medicine in the U.S., though not in other countries. While part of the reason has to do with the way taxpayers subsidize these quasi-public sectors, much of the cost inflation results from the fact that Ed and Med are organized as craft industries, as railroad tunneling was in the original John Henry’s day.

There will always be a need for personal interaction among teachers and students and for personal judgment by experienced medical professionals. But just as routine manufacturing labor was mechanized, first in the age of the steam engine and then in the electrical motor era, so routine knowledge services need to be automated in the computer age. Much of the routine knowledge work of professors, doctors and lawyers might be done in the future by advanced software.

Today’s universities and hospitals are the equivalents of neighborhoods hosting numerous individual blacksmiths working independently. They need to be replaced by higher education factories and health (not sickness) factories. Tasks done today by a few highly paid, credentialed elite professionals and an army of low-paid lecturers and health aides should be broken down, analyzed and reassigned to the moderately paid, middle-class Ed workers and Med workers of tomorrow. This may require a combination of capital deepening (the use of new technology) and deskilling (a moderately educated, moderately paid nurse with high-tech equipment may be a better diagnostician than today’s highly educated, richly remunerated M.D.)

Another social roadblock in the way of wider deployment of IT takes the form of low service-sector incomes. Low wages are a roadblock in two senses. On the demand side, they limit the purchasing power of consumers, removing a demand-side incentive for more IT investment in the service sector. On the supply side, cheap workers reduce the incentives for employers in service industries to increase productivity by partly or wholly replacing relatively expensive labor with technology.

There are a limited number of ways to raise the incomes and spending power of low-wage service-sector workers. We can raise the private market wage -- for example, by raising the minimum wage and restricting wage-depressing low-skilled immigration.

We can supplement the market wage with a "social wage" like the Earned Income Tax Credit, which goes directly to the worker, or by wage subsidies to employers.

We can lower taxes on middle- and lower-income workers. Because about half of workers already pay no income tax, this might mean lowering payroll taxes, which would require other sources of income to fund Social Security, Medicare and unemployment insurance if they are not to be cut. We can increase after-tax redistribution -- whether in the form of cash transfers, like Social Security checks, or public services, like K-12 education.

Finally, we can promote "universal capitalism" by increasing ownership of income-generating assets, like shares in growing corporations, although the disastrous experience with 401K’s shows that any such programs must limit risk. Some combination of these reforms will probably be necessary to remove low wages as a social roadblock to the maturation of the information economy.

In addition to increasing the incomes of working Americans, we can increase their borrowing power. In the last generation, many legitimate public credit programs, like federally backed home mortgages and student loans, were abused to enrich financial sector parasites while reducing millions of Americans to the status of debt serfs. But well-designed public credit programs that cannot be gamed, along with income-raising reforms, should be part of a program to increase mass consumer demand for goods and services in an economy whose greater productivity is made possible by innovative deployment of IT.

The special interests threatened by reforms designed to remove technological roadblocks, from doctors and professors and inefficient public servants to the parasitic elements of the American financial industry, can be counted on to try to preserve their privileges, even at the expense of American economic growth. And there will be armies of libertarian ideologues, funded by billionaires, who will chirp in unison that the magical market will do everything on its own, if only America’s undertaxed rich are taxed even less.

But public infrastructure and labor market reform have always been necessary to realize the potential of new technology in the past. If the full potential of the maturing IT revolution is to be realized in post-crisis America, public infrastructure investment and government-sponsored increases in the purchasing power of average Americans must be undertaken once again.