Arizona wildfire may be biggest in state history 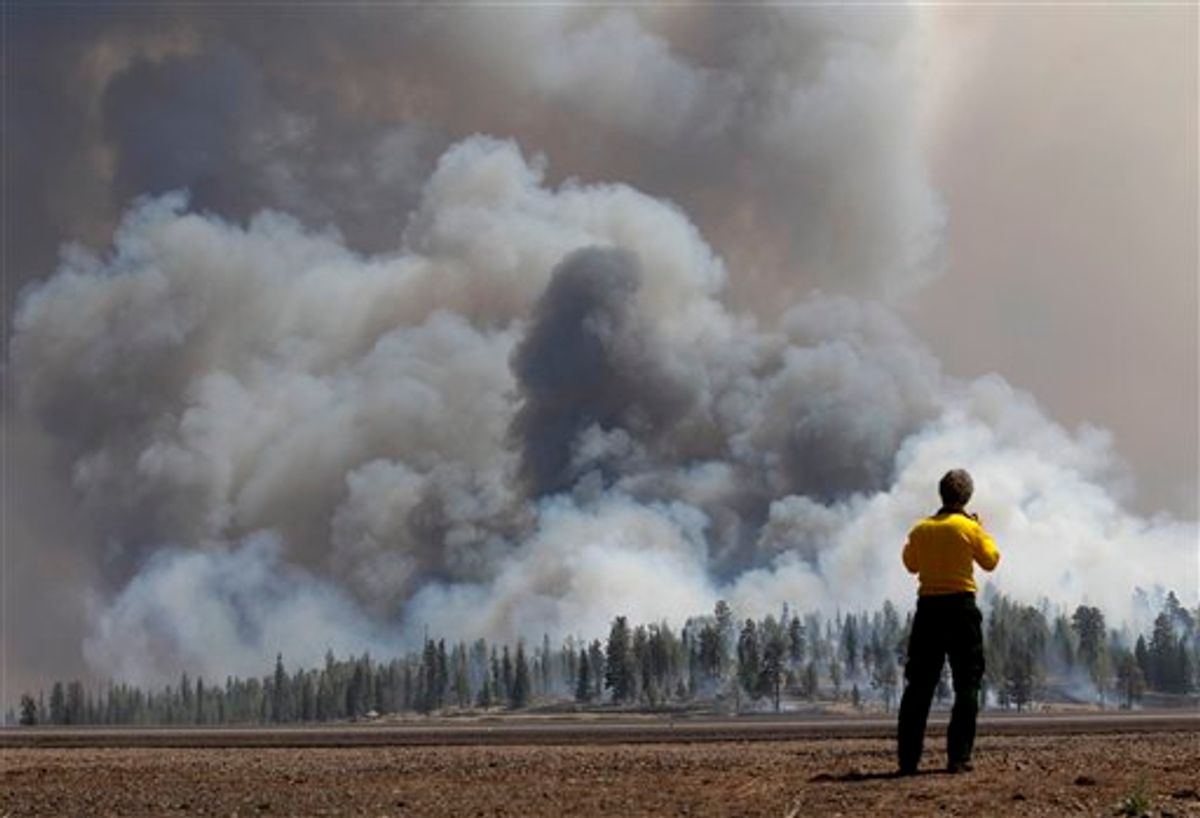 A photographer looks at smoke from a burnout fire as firefighters battle the Wallow Fire in the Apache-Sitgreaves National Forest, Ariz., Sunday, June 12, 2011. Roughly 7,000 residents of two eastern Arizona towns evacuated last week as a wildfire loomed nearby were allowed to return home Sunday as officials expressed confidence that they were making progress in their battle against the huge blaze that has been burning since May. (AP Photo/Jae C. Hong) (AP)
--

A massive wildfire in eastern Arizona is burning more acres than the largest in state history, although some of that area is in New Mexico, where flare-ups that skipped along treetops Tuesday threatened a small mountain town.

The Wallow Fire has burned more than 733 square miles since Memorial Day weekend. Fire spokesman John Helmich said Tuesday morning it's not yet certain whether the acreage that has burned in Arizona makes it larger than the 2002 Rodeo-Chediski fire, which burned 732 square miles, destroyed 491 buildings and cost about $400 million to fight.

The current blaze has burned only 31 homes and some other structures. It has encroached into New Mexico about a mile from the working-class community of Luna, where residents were warned to be prepared to flee.

In the state's opposite corner, near the Colorado border, a wildfire fanned by high winds that has forced hundreds of people from their homes more than doubled in size to an estimated 6,000 acres.

"We're watching trees explode before our eyes. It's horrendous," said Barbara Riley, a schoolteacher and bed-and-breakfast owner in the northeastern New Mexico community of Raton. A 20-mile section of the main north-south highway through New Mexico and Colorado remained closed, causing hundreds of travelers to drive hours out of their way.

Crews worked furiously to protect Luna from the Wallow fire, after a successful weekend of no major fire growth despite gusting winds and dry conditions.

Hundreds of firefighters worked along U.S. Highway 180 between Luna and the state line, hacking down brush, using chain saws to cut trees, and burning fuel in the fire's path.

Catron County Undersheriff Ian Fletcher said the roughly 200 Luna residents hadn't yet been ordered to leave, but evacuation plans were in place.

Fire spokesman Sean Johnson said the work crews have done clearing brush and setting their own fires to burn off fuel along the state line has so far spared Luna from the inferno.

"That's what's saved the town," Johnson said. "The line is holding. There's no fire in New Mexico that we haven't set ourselves."

Roughly 7,000 residents of the two Arizona mountain towns of Eagar and Springerville on the fire's northern edge were allowed back home over the weekend. Crews had stopped the blaze's northern advance and were trying to corral its eastern push into New Mexico.

Officials continued to express optimism that their efforts were paying off.

"It's getting better every day," said fire spokesman Kelly Wood.

About 2,700 people who live in several Arizona resort communities in the Apache-Sitgreaves National Forest remained under an evacuation order. Fire officials said they were working to make the picturesque hamlets of Alpine, Nutrioso and Greer safe for residents to go home, possibly within the week.

Greer, considered the jewel of eastern Arizona's summer havens, lost more than 20 homes and a couple dozen outbuildings as flames moved into the valley last week.

The wildfire near the New Mexico-Colorado border started Sunday on the west side of Interstate 25 and jumped to the east side later that day. Up to 1,000 people were asked to leave their homes northeast of Raton.

The fire prompted the closure of I-25 from Trinidad, Colo., to Raton, sending summer motorists on lengthy detours. Fire officials said at least two structures had burned, but they couldn't say whether they were homes, businesses or outbuildings.

The blaze more than doubled in size in a matter of hours Monday, to about 9 square miles, as crews worked to protect structures.

"It looks like your worst nightmare," Raton Mayor Neil Segotta said after he saw the plume of smoke rising from the hills outside the city.

Another wildfire in southern Colorado spread to about 1,000 acres and forced the evacuation of a church camp. Crews were attacking the blaze near Westcliffe from the air after it broke out Sunday and quickly spread in dry conditions.

Several other fires were burning around Arizona, including a huge blaze near the southeastern border town of Portal that has burned more than 232 square miles since May 8. It was about 50 percent contained. Another fire that broke out Sunday outside Sierra Vista near the Coronado National Memorial also forced evacuations.