Who are we to tell Anthony Weiner to quit?

We need to get used to the idea that most reasonable people do dumb stuff sometimes. Or many times 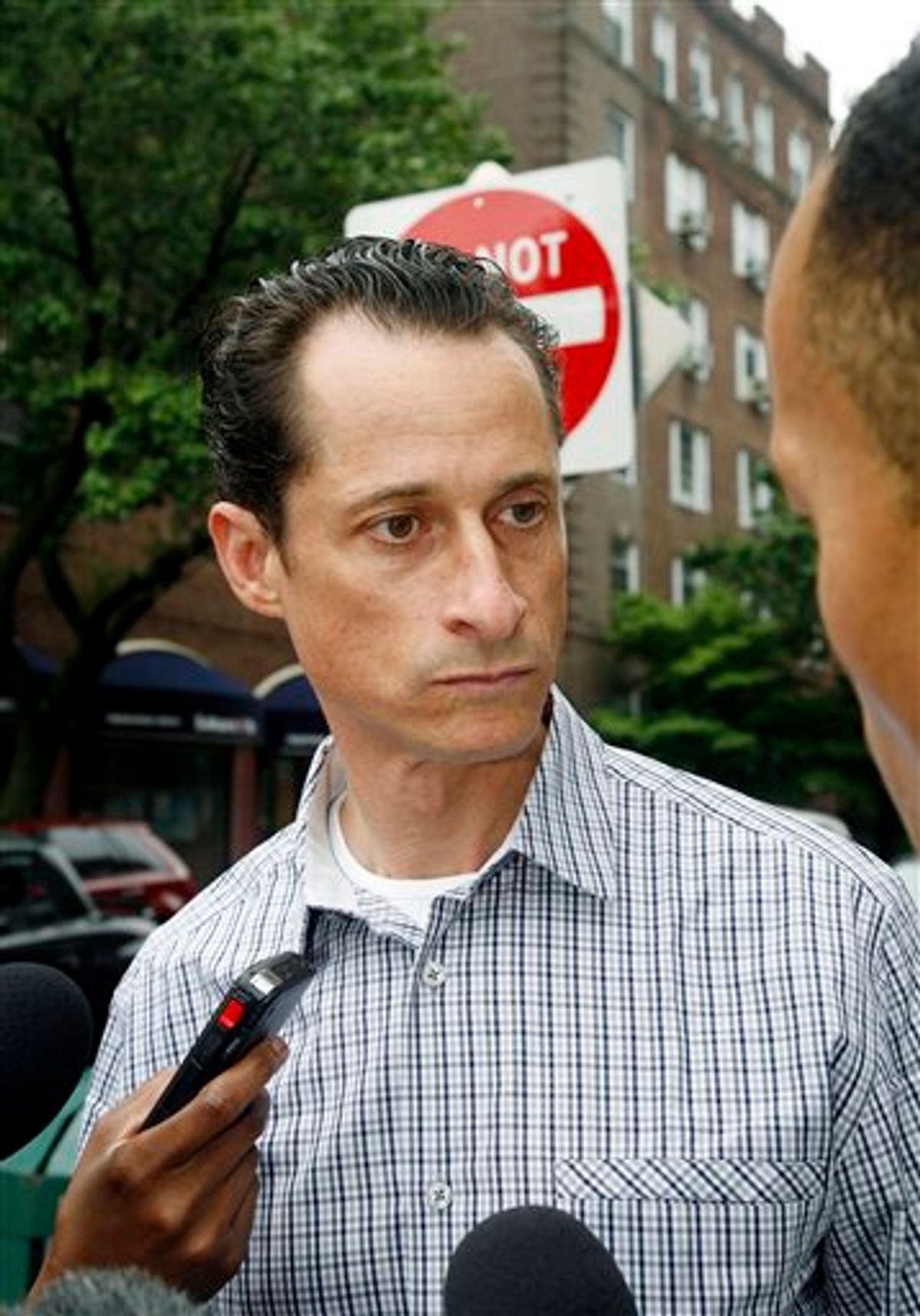 Over the weekend, TMZ released a couple more humiliating photos of Rep. Anthony Weiner, taken in the House gym and sent to an unidentified woman. The Ethics Committee began its inquiry into his lewd behavior, and Weiner was said to be entering some sort of "treatment." (Do they have in-patient treatment options for taking and sending nudez, now? Or will this be treatment for run-of-the-mill smug narcissism?) (If the latter, shouldn't the rest of the New York congressional delegation join him?) And people continued writing things about whether he should or should not resign, framing it either as a political calculation (he's bad for the Democrats!) or a moral issue (he lied!).

I tend to find it pretty silly when pundits, columnists and bloggers "call for" the resignations of any public officials guilty of having embarrassing things reported about them. (As opposed to the ones who are caught on wiretaps accepting bribes or something.) This time is no different. I have never been much of a fan of Anthony Weiner (which may surprise some BigGovernment.com readers, but there is plenty of evidence to support that claim) (remember when he compared the Gaza Flotilla to an imaginary terror boat from Yemen headed for New Jersey?), but I never called on him to resign because I thought he was a tool of reactionary anti-Muslim bigots, so why bother calling for his head now that I know he's a tool of reactionary bigots who also enjoys sexting porn stars?

Should he resign for lying? It was the most understandable sort of lying in the world: the kind done in desperation to avoid public embarrassment. Politicians lie daily about matters of life and death and political reporters don't much care. It was actually much more shameful when Weiner said the Palestinian delegation to the U.N. should "start packing their little Palestinian terrorist bags." But that sort of statement, unlike a self-taken nude photo, is considered within the realm of acceptable politician behavior.

So, yes, I would like Anthony Weiner to resign, but I'd also like Mike Bloomberg, the editorial board of the Washington Post, Maureen Dowd, and celebrity chef Curtis Stone to quit their jobs, too. And I have very good reasons to want all of those people to go away, but I am realistic about the worth of my opinion in each case. All I can do is explain what's wrong with them (respectively: tool, tyrant, morons, predictable, poor man's Gordon Ramsay) and hope the people in charge of making such decisions are convinced by my arguments. Thus far, Weiner's constituents have not been convinced.

If Anthony Weiner wants to stop facing a seemingly endless series of incredibly public humiliations, he should resign. (He also shouldn't have sent so many people so many dirty pictures of himself!) (Or at least he should've understood that as soon as you send someone a dirty picture via the Internet, it will likely end up on a disreputable site like MediaTakeOut or BigJournalism.com.)

But grossness is not a compelling reason to demand that someone resign from public service, especially when Weiner will face the voters next year anyway; he's not a senator five years out from his next reelection campaign, insulated from the electoral consequences of his actions. (If he were a senator his colleagues would probably be much less likely to demand his head, but that's barely relevant.)

Grossness is a compelling reason to write about a public figure, though. Here I break with Peter Beinart, who wrote in the DailyNewsBeast yesterday that it's none of our business what Weiner did. Beinart wants more compassion! And he maybe kinda wants political reporters to withhold embarrassing stories out of a sense of decorum, like in the good old days!

How many of the pundits mocking Weiner have marriages that could survive the kind of scrutiny they have been giving his? The realization that everyone’s private life is messy and flawed should produce humility and compassion. Instead, pundits enter the public arena as disembodied Olympian figures, entitled to render the harshest of verdicts, secure in the knowledge that no one will ever investigate their most intimate of domains.

We need a new rulebook. Credible allegations of nonconsensual sex -- the kind of thing Dominique Strauss-Kahn is alleged to have done -- are absolutely fair game. But when it comes to adultery and virtual adultery between consenting adults, it's way past time that prominent figures in the media loudly declare that it is none of their business, and they won't join the scrum.

Humility and compassion are wonderful qualities that are in very short supply in America these days, because they're queer/European attitudes, but adultery by celebrities has always been newsworthy. Even Ramesh Ponnuru, who's with Beinart on the general niceness of pundit self-restraint about affairs (how old-fashioned!) finds that Weiner's embarrassments are worthy of coverage. What looks like a moral outrage is sometimes just a collective mass of Americans marveling at the stupidity and stunningly poor decision-making of the powerful and prominent. This is what democracy looks like! (It's gross!)

Michelle Goldberg's Tablet piece is a bit more sophisticated than Beinart's take, pointing out that we're all endlessly castigating people for behaviors that have always been common (pace Megan McArdle, who thinks The Kids Today invented dick pix) among the powerful and regular folks alike. Those acts (not just the sexting, but also, say, writing dumb, inflammatory things to an email listserv, or posing for photos that seem funny when you're drunk) are now all documented instantly and endlessly reproducible, which means a million new potential humiliations for all of us, every day!

It could be that the ability to guard one’s public image, despite the Internet’s intrusions and temptations, is a requisite of modern political life. In that case, Weiner will have to go. But his crime wasn’t engaging in legal and not even particularly kinky cybersex. It was getting caught.

Given the virtual panopticon we now live in, Weiner won’t be the last person to be subjected to this kind of merciless exposure and ridicule. That’s why at some point, unless we want to endure a constant cycle of scandal and personal destruction, we should really figure out some way of forgiving people for being grossly human in public.

The only answer to this situation with any hope of alleviating the cycle of ridicule is to just get used to the idea that most reasonable people do dumb shit, sometimes. Or many times.

To sum up: Should Anthony Weiner resign? On a strictly personal level, why would he even want to go back to his suddenly dead-end job, with a bunch of people who hate him? But on the other hand, the benefits are pretty good, and he's got a kid on the way. I guess he'll have to mull this over, while he's in the Vincent Gallo Clinic for Sufferers of Inflated Self-Regard.