Afghanistan is ranked the most dangerous country for women

An expert survey ranks the most perilous countries for women, but results should be viewed critically 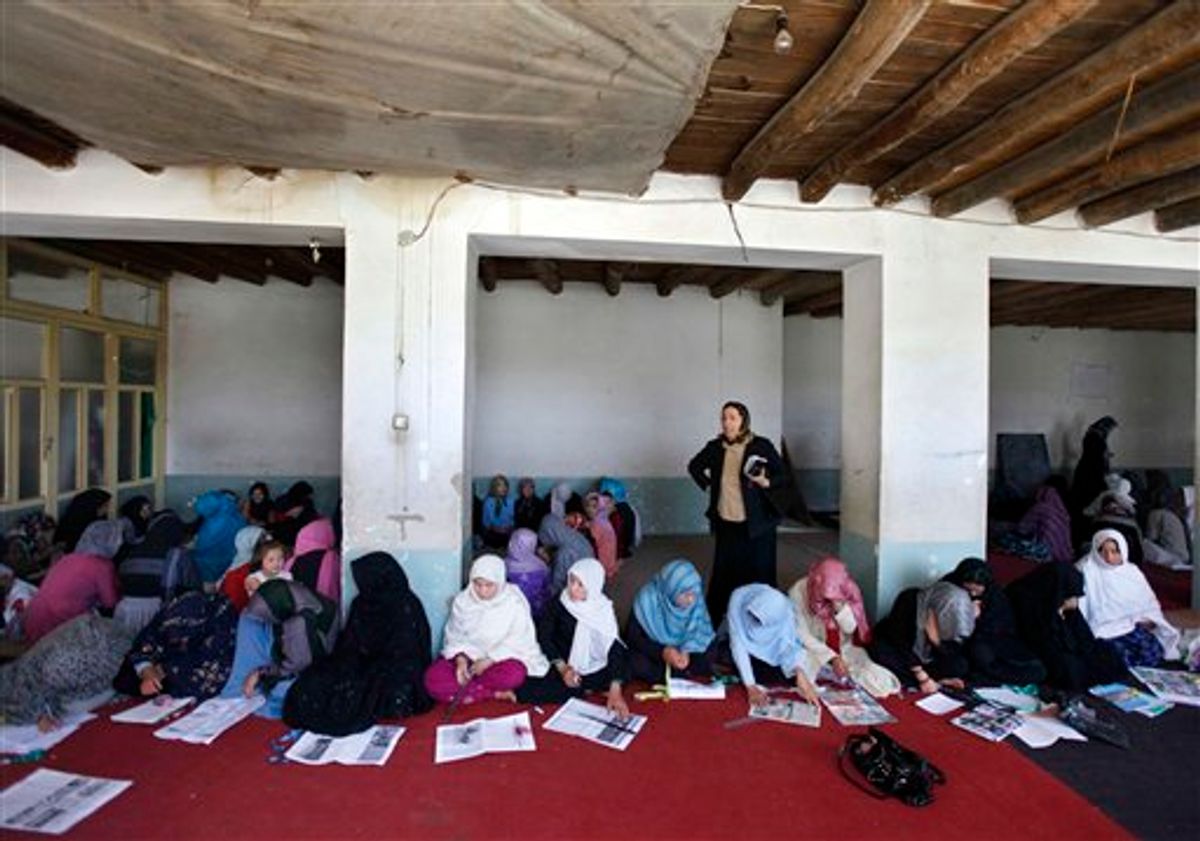 In this Monday, May 16, 2011 photo, women learn tailoring at a training center of the Afghan Institute of Learning in Kabul, Afghanistan. Sakena Yacoobi's AIL has grown from a few makeshift schools in Pakistan and Afghanistan in the mid-1990s to an organization running schools, women's learning centers, day care centers and clinics across seven of the 34 Afghan provinces. (AP Photo/Mustafa Quraishi) (AP)
--

Which countries were found to be most dangerous? Afghanistan was ranked the most dangerous, followed by the Congo, then Pakistan, then India, then Somalia.

Why? In Afghanistan, "violence, poor health care and brutal poverty," notes Al-Jazeera, afflicts women, "while in Congo there are horrific levels of rape" (reportedly some 420,000 women are raped a year). Other practices and circumstances found in countries considered the most dangerous include domestic abuse, genital mutilation, acid attacks and economic discrimination.

The NATO airstrikes in Afghanistan, one women's rights advocate told Al-Jazeera, are among the dangers threatening women in the country.

How did the survey work? 213 gender experts -- aid professionals, academics, health workers, policymakers, journalists and development specialists -- from all around the world ranked the countries based on general perceptions and six specific risks: health threats, sexual violence, non-sexual violence, cultural or religious factors, lack of access to resources and trafficking.

Surprising results? Some have responded with surprise to see India so high up the list, given that women, such as former Prime Minister Indira Ghandi -- are able to reach the highest levels of public offi. However, it ranked highest for sex trafficking. Only 12 percent of the experts ranked it the worst country in regards to this practice, but no other single country was picked as consistently.

The Wall Street Journal's Tripti Lahiri registers some surprise at countries missing from the list: "China also practices widespread sex selection and is ranked on the State Department’s Tier 2 Watch List on human trafficking, same as India, while South Africa has a reputation for a high level of sexual violence. Two years ago, Amnesty International declared maternal mortality a “human rights emergency” in Sierra Leone, but the country didn’t appear among those the experts polled were most worried about on this front.

Trustworthy methodology?: TrustLaw explain the methodology of how they reached the rankings, but do not go into detail about the gender experts who provided the results, save for that they are from all five continents and a range of professions. Potential biases in how the experts might have been chosen cannot be checked. It also is problematic that TrustLaw does not elaborate on how it uses terms like "rape" and "domestic abuse," which can come in numerous and insidious forms. More worrying still, the survey frames "danger" in such a way that it was always going point to non-Western countries as the most dangerous for women. For a more nuanced look at why this is hugely problematic, see the fantastic article by Lila Abu-Lughod of Columbia University called "Do Muslim women really need saving?" In stark contrast, the TrustLaw survey at best offers a snapshot of genuinely concerning situations across the world, but lacks any real or valuable analysis; at worst it betrays concerning cultural and racial biases.