Bachmann returns to House as a star 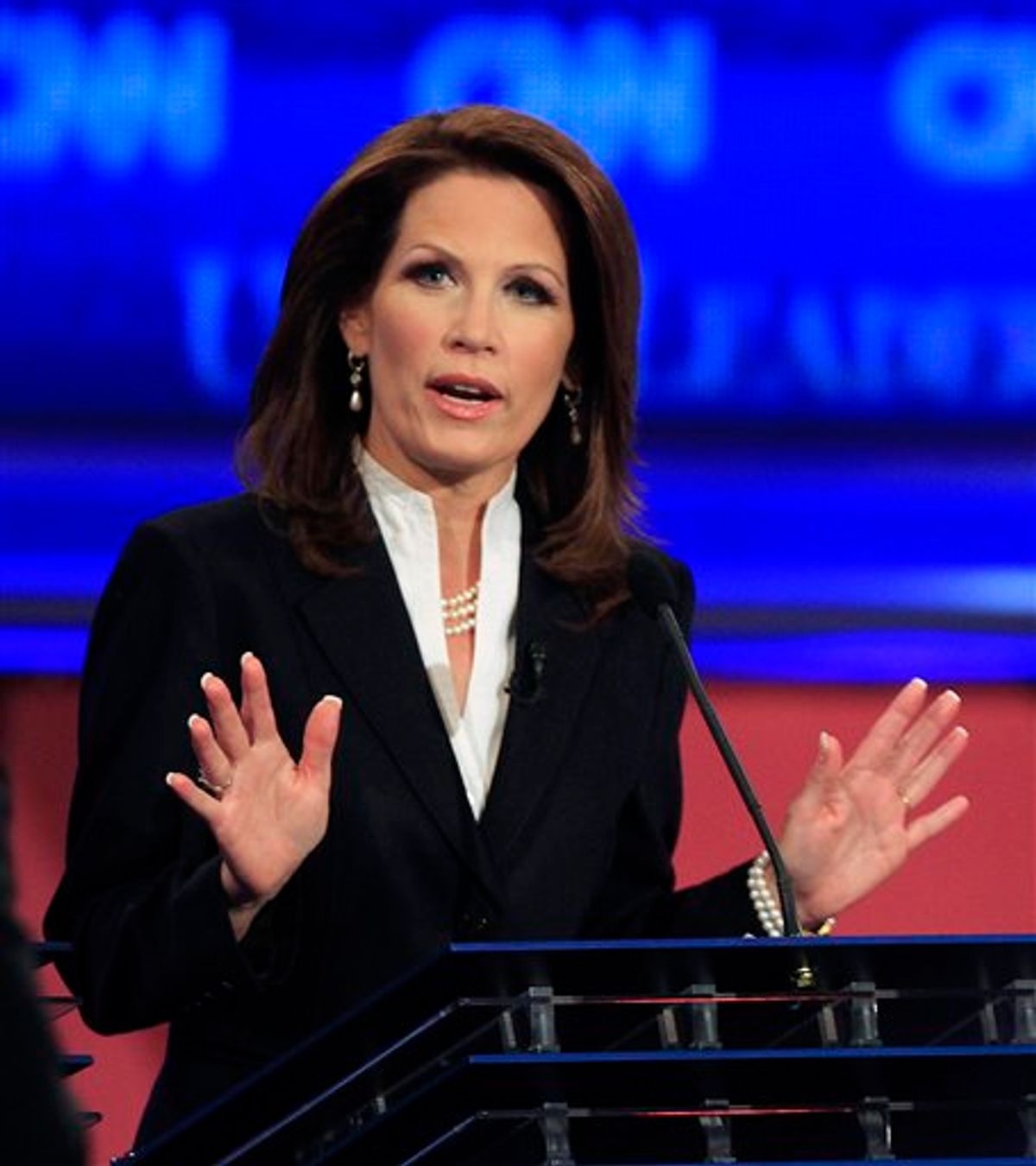 WASHINGTON — Steps from the House floor, as Michele Bachmann prepared to cast her first votes since announcing she's running for president, colleagues stopped her to tell her just how great she did in the first New Hampshire presidential debate.

Iowa Rep. Steve King was first to see her. "Michele!" he called out, before embracing her, holding her shoulders and telling her just how great he thought she was. "It's pretty hard to name somebody in that debate [Monday] night who helped themselves more than Michele did," King told MinnPost later.

Colleagues who walked by touched her shoulder to get her attention and said "great job" and "congratulations" as they entered the House chamber. Her press calendar was full, phone lines to her office were jammed and four of her staffers walked with her to and from the chamber, briefing her on everything from upcoming votes to the avalanche of media requests.

Tuesday provided the first glimpse of the new role for Michele Bachmann — at once both a relatively junior Republican backbencher in the House and also a Tea Party-infused insurgent candidate for president.

Bachmann, in an interview Tuesday, said she'd be leaning on her House experience as she runs for president.

"I think where I fit into this race is that from day one when I arrived in Washington I've been the leader and the movement that I've been leading is really the unique voice that's come up across this country that's the Tea Party, and it's fiscal sanity that people want to see to return to Washington D.C."

When asked what she brings to the table different than other candidates, Bachmann returns to her House experience. "I think I've been extremely effective to bring that voice here, in the halls of Congress, and to have that voice known, and now I want to take that voice to the White House," she said.

"That's what the difference will be. I've been here fighting these fights, people know that I'm going to do what I say I'm going to do, but also I think that I'm very much in tune with where the Tea Party is at and I intend to take that voice to the White House."

An easier path to a higher office?

The reception Bachmann got Tuesday stood in stark contrast to the one she got eight months ago, when she last ran for a higher office.

The day after the 2010 elections, where Republicans surfed a Tea Party-whipped wave into the House majority by picking up a net 63 seats, Bachmann, who'd founded the Tea Party Caucus in that body sent her colleagues a letter, asking for a promotion.

"To our Conference I bring strong principled conservative values, a proven level of experience, effectiveness with our friends in the local and national media, and an energetic national constituency that reflects the results of Tuesday night," wrote Bachmann in a letter to her colleagues asking them to support her bid for chair of the Republican Conference, the number four spot in party leadership. "It is important that our Conference demonstrate to the people who sent us here that their concerns will be tirelessly advanced at the table of leadership."

There was never a vote. In part driven by concerns that Bachmann was too much of a loose cannon to be trusted with that job, her party's leadership rallied around Jeb Hensarling of Texas, a quieter but still very solid conservative who quickly garnered enough endorsements to render a vote redundant.

Bachmann had lined up just five public endorsements when she eventually threw in the towel. Sometimes after a loss becomes imminent, a consolation prize will be offered to them — that's what happened on the Democratic side when Steny Hoyer bested Jim Clyburn for the number two job in the House, as a new number three job was created for Clyburn. Bachmann got none of that.

"Republican House leaders do not view Bachmann as a team player, despite their ideological congruence," said Kathryn Pearson, a political science professor at the University of Minnesota. " Bachmann's 'outside strategies' sometimes deviate from House Republicans' strategy and message, causing headaches for leaders trying to unify the House GOP Conference. "

Indeed, that rejection may have actually helped Bachmann, who now decidedly not in leadership was free to go her own way.

"These outside strategies resonate with Tea Party identifiers in the electorate who view Bachmann as an authentic and unwavering voice against the President and his policies," Pearson said. "With increasing national appearances and fundraising success, Bachmann's voice has become louder, and Monday's debate further elevated her status among conservative Republicans in the electorate."

Most notable on that path was when she and King devised a strategy just hours before a budget vote that would flip the course of negotiations on Capitol Hill. If the House doesn't vote for something, it can't pass, and that Republicans hold the majority in that chamber.

So if they could get every Republican to vote the same way, the GOP effectively had its own veto. Realizing that, Bachmann and King have since tried to force the issue and insist on a fundamental walk-back of every major policy enacted under the Obama administration thus far.

Their first demand was a full defunding the health care law, refusing to vote for any major spending bills (budget, debt ceiling, etc.) until the entire health care law is repealed or defunded. So strident were Bachmann and King on this — and so effective in ginning up support from the grassroots — that some colleagues who had been allies before lit into her in a closed caucus meeting last month and told her to tone it down.

Onstage at her first presidential debate, however, Bachmann's recitation of her House tactics brought her peals of applause, widespread agreement from the other six on stage who aim to lead their party in 2012, and a consensus that she was among the two "winners" of the debate, along with frontrunner Mitt Romney.

"It's easier for Michele Bachmann to be elected president of the United States than it is for her to become the chair of an 'A committee' here in the United States Congress," King said of the wildly different receptions of the very same Bachmann.

A senior GOP aide, asked about King's comments, said there's not necessarily a disconnect between Bachmann's reception in the House and on the trail, adding that her colleagues have taken note of her Intelligence Committee performance.

It was a source of jokes on the Hill when Bachmann was named to the Intelligence Committee shortly after she lost that leadership election. But top officials say (speaking on condition of anonymity as Intel briefings are classified) that she's impressed by showing up to a lot of briefings — sometimes missing press conferences and rallies where she's the featured speaker to do so — taking detailed notes and asking pertinent and probing questions.

"It's not that she couldn't get a gavel," the senior aide said, "it'd just take at least a decade."

Bachmann came from the statehouse and, if elected president, would have been in Congress for six years. The experience track reminds of a state senator from Illinois, who broke onto the national scene quickly and was elected president after four years in the Senate.

"The real issue isn't the issue of experience with President Obama, as much as it is that he's wrong on his policies," Bachmann said when asked to compare. The reverse of that sentence — someone with as much time in Congress as Obama and the right policies would be right for the job — could stand as a defense for her later.

"And I think that the report card is already out and he's failed the American people miserably on job creation, on unemployment numbers, on almost any metric on the economy and on foreign policy. And that's where the difference lies in the fact that I think that the policies I will be putting into place will turn the country around and keep the people safe, and that's what we need."

Of those candidates on stage in New Hampshire, Bachmann and Ron Paul were the only two with a day job. Paul, who stayed in the House during his 2008 presidential run, is likely to do that again, and Bachmann said she will stay in Congress too.

"I'll continue to serve the people of the 6th District of Minnesota. "I had made that obligation and promise when I ran, and I intend to keep that promise."

There is almost no way Bachmann can run without missing votes, as she did when she was in New Hampshire Monday night for the debate while the House remained in session. Counting this current week, the House is scheduled to be in session 13 of the 24 weeks until Thanksgiving, with votes likely three to five days per week.

It's a delicate balancing act. On the one hand, the fundamental job of a representative is to show up and vote. On the other hand, when she chose to stay for a vote on the Patriot Act rather than fly to Iowa for a fundraiser she was supposed to headline, she took some flack from those at the dinner who'd paid to hear her speak in person.

"I'll be committed to serving the district throughout my time here, and I'll be pursuing the presidency vigorously, and primarily that will be on weekends and on break periods."

A month ago, Bachmann told MinnPost that if she ran for president, she'd run to win. But if she didn't get the nomination, she'd like to stay in the House next session. Asked about those comments, and whether there was still a Plan B, Bachmann replied, "Well, I'm running for the presidency of the United States, and I'm all in.