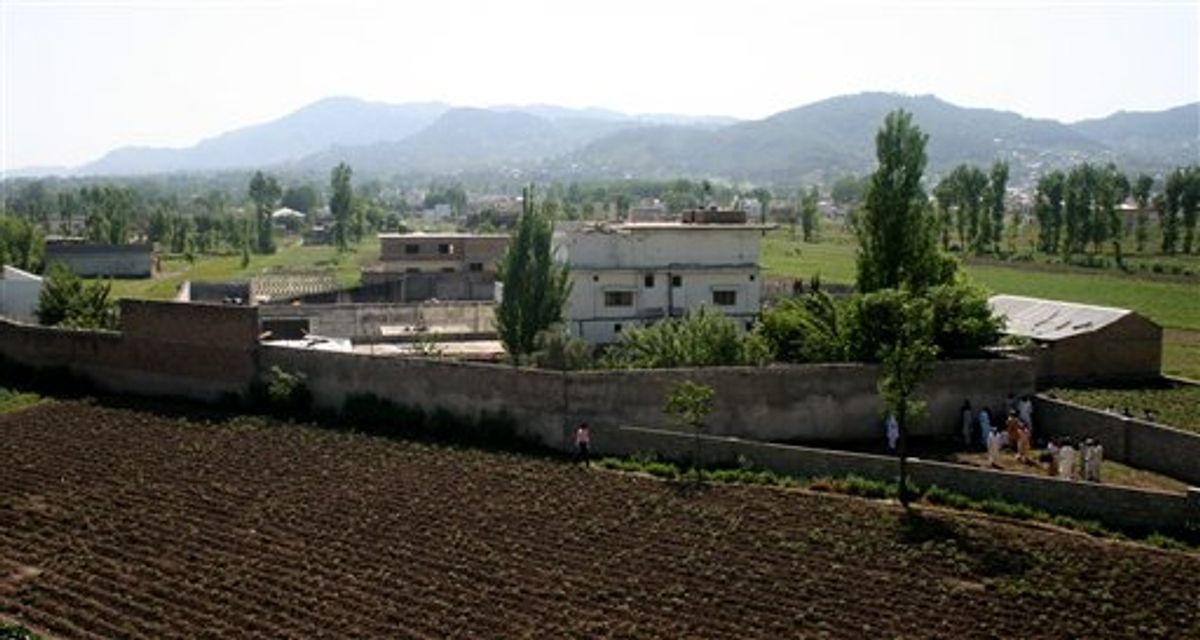 FILE - This May 3, 2011, file photo, shows a view of Osama bin Laden's compound in Abbottabad, Pakistan. U.S. officials briefed on the secret mission to get Osama bin Laden in Pakistan say the raids planners knew it was a one-shot deal. Those behind the raid predicted at the time that outrage over the breach of Pakistani sovereignty would make it impossible to try again if the raid came up dry. (AP Photo/Aqeel Ahmed) (AP)
--

The Pakistani army denied Wednesday that one of its majors was among a group of Pakistanis who Western officials say were arrested for feeding the CIA information before the American raid that killed Osama bin Laden.

The New York Times, which first reported the arrests of five Pakistani informants Tuesday, said an army major was detained who copied license plates of cars visiting the al-Qaida chief's compound in Pakistan in the weeks before the raid.

A Western official in Pakistan confirmed that five Pakistanis who fed information to the CIA before the May 2 operation were arrested by Pakistan's top intelligence service.

But Pakistani army spokesman Maj. Gen. Athar Abbas denied an army major was arrested, saying the report was "false and totally baseless." Neither the army nor Pakistan's spy agency would confirm or deny the overall report about the detentions.

The group of detained Pakistanis included the owner of a safe house rented to the CIA to observe bin Laden's compound in Abbottabad, an army town not far from the Pakistani capital of Islamabad, a U.S. official said. The owner was detained along with a "handful" of other Pakistanis, said the official.

The Western officials spoke on condition of anonymity to discuss sensitive intelligence matters.

The fate of the purported CIA informants who were arrested was unclear, but American officials told the Times that CIA Director Leon Panetta raised the issue when he visited Islamabad last week to meet with Pakistani military and intelligence officers.

U.S.-Pakistani relations have been strained over the raid by Navy SEALs on Pakistani territory, which embarrassed Pakistan's military, and other issues. Officials said the arrests of the suspected informants was just the latest evidence of the fractured relationship between the two nations.

The Times said that at a closed briefing last week, members of the Senate Intelligence Committee asked Michael Morell, the deputy CIA director, to rate Pakistan's cooperation with the United States on counterterrorism operations, on a scale of 1 to 10.

"Three," Morell replied, according to officials familiar with the exchange, the newspaper said.

American officials speaking to the Times cautioned that Morell's comment was a snapshot of the current relationship and did not represent the Obama administration's overall assessment.

"We have a strong relationship with our Pakistani counterparts and work through issues when they arise," Marie Harf, a CIA spokeswoman, told the newspaper. "Director Panetta had productive meetings last week in Islamabad. It's a crucial partnership, and we will continue to work together in the fight against al-Qaida and other terrorist groups who threaten our country and theirs."

Husain Haqqani, Pakistan's ambassador to the United States, said in an interview with the Times that the CIA and the Pakistani spy agency "are working out mutually acceptable terms for their cooperation in fighting the menace of terrorism. It is not appropriate for us to get into the details at this stage."