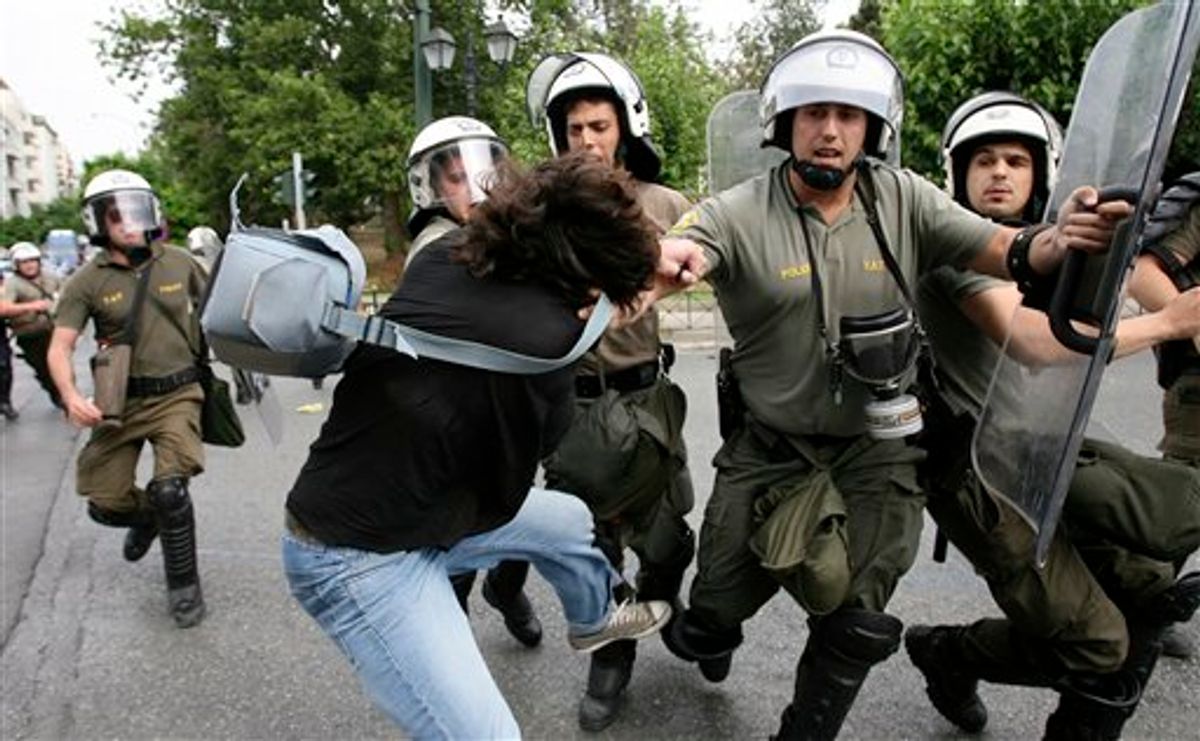 Police arrest a demonstrator trying to block the road to the Parliament during a rally against plans for new austerity measures, in central Athens, Wednesday, June 15, 2011. A 24-hour anti-austerity strike by Greece's largest labor unions crippled public services Wednesday, as the Socialist government was to begin a legislative battle to push through last-ditch cost-cutting reforms that will extend beyond its own term in office. (AP Photo) (AP)
--

As riots engulfed Athens, Greece's ruling Socialists launched talks to form a coalition government with rival conservatives -- even though Prime Minister George Papandreou's resignation may eventually be the price for a deal.

A deal would help ensure approval of a new austerity plan that has enraged a nation already hit hard by draconian welfare cuts but is also essential to avoid a default that would knock the global economy.

The emergency talks came as riot police clashed with thousands of youths in the main square outside Parliament. Police fired repeated volleys of tear gas to repel rioters hurling firebombs and ripped-up paving stones. A crowd of youths smashed the windows of a luxury hotel in the square.

As unrest spiraled, the coalition talks appeared to come at a high cost: Papandreou's job.

Papandreou's government had already been facing an internal party revolt over the new austerity package that's the main condition for continued funding from an international bailout and avoiding a devastating default which would undermine the future of the eurozone.

Wednesday's chaos triggered a sell-off in global financial markets as investors worried that a default in Greece could hurt banks in other countries in a chain reaction experts predicted would be catastrophic. Yields on the country's 10-year bonds reached new record highs, spiraling to 18.4 percent.

Papandreou and conservative party leader Antonis Samaras discussed the creation of a power-sharing government to deal with the country's crippling debt crisis during a telephone conversation, an opposition party official told The Associated Press. The official spoke on condition of anonymity because the negotiations were still ongoing.

The official said the conservatives' conditions for participating in a potential grand coalition were that Papandreou leaves his current position as prime minister, and the new government re-negotiate the bailout agreement.

An official close to the prime minister said that because Samaras had no specific proposal during the talks, Papandreou said he would be prepared to discuss a "government of mutual consent" and could agree to step aside as part of a long-term deal. He denied that Papandreou had offered his resignation.

The official also spoke on condition of anonymity because talks were still ongoing.

Several conservative deputies publicly backed the idea of Papandreou handing over his position.

"The most important member of a ship's crew is the captain, and the captain has to go," prominent conservative deputy Theodoros Karaoglou said. "If we joined forces, we could go to our (creditors) together to negotiate and the results of course would be better."

The new bill, worth euro28 billion ($40.5 billion) must be passed if Greece is to continue tapping its rescue loans.

Markets have been in turmoil amid waning confidence that Papandreou could win the vote in the 300-seat Parliament, where his majority was trimmed to five Tuesday after one of his deputies rebelled and declared himself an independent. Another deputy has said he will not support the bill, due to be voted on by the end of this month.

European officials have pushed for cross-party support for the measures as they extend to 2015, two years beyond the current government's term in office.

Wednesday's riots broke out and lasted several hours after large crowds of more than 25,000 people gathered outside Parliament and as unions held a general strike to protest the new austerity.

Cafe tables and chairs lay overturned in the city's main Syntagma Square as trash bins burned. Heavy clouds of tear gas hung over Syntagma Square and side streets. The choking chemicals wafted as far as the presidential mansion behind Parliament, where Papandreou met with the country's president, Karolos Papoulias, to brief him on the severity of the situation.

Papandreou has suffered plummeting approval ratings as well as the internal party revolt.

But the new austerity package must be passed if Greece is to avoid bankruptcy. The country has been dependent for the past year on a euro110 billion package of bailout loans from other European Union countries and the International Monetary Fund to prevent it from defaulting on its debts.

Derek Gatopoulos contributed to this report.