Old, difficult and unsexy, a 20th-century masterpiece becomes the best example yet of how to make a digital book 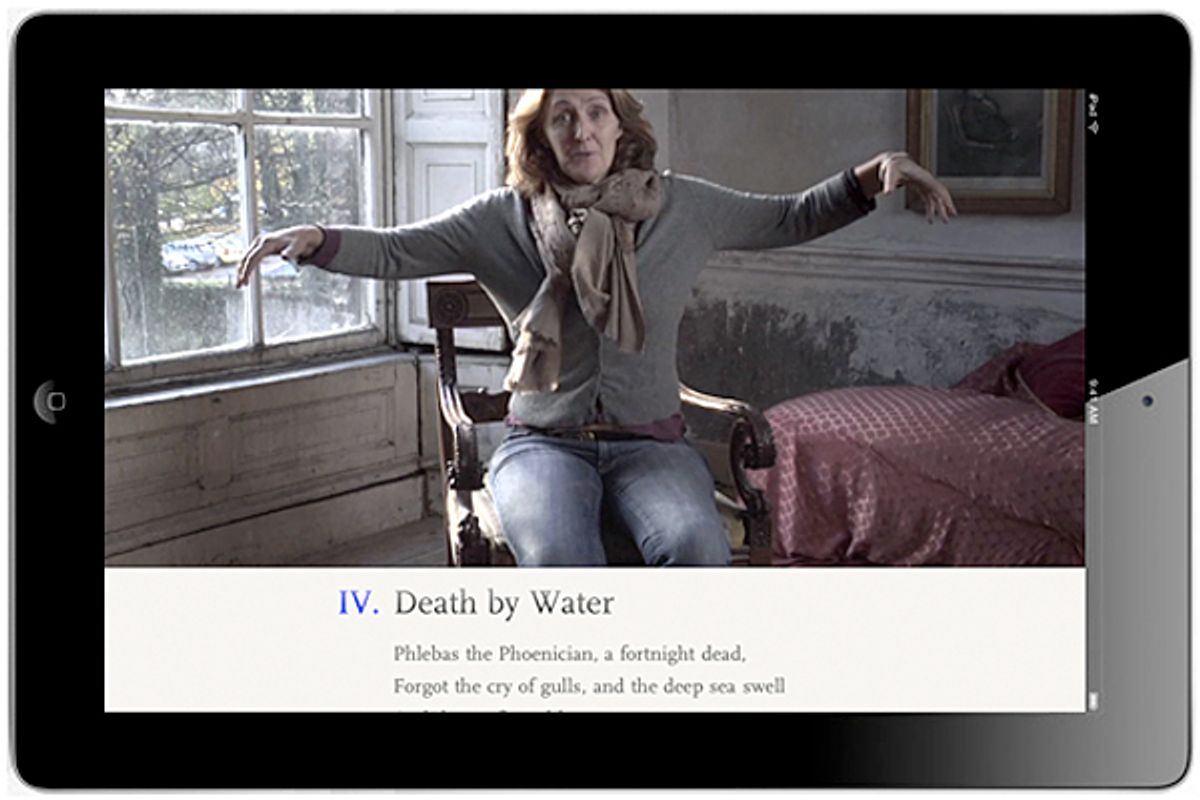 A screenshot from "The Wasteland"
--

The enhanced e-book -- a digital text that comes garnished with multimedia material -- is one of those ideas that sound terrific in theory but are rarely satisfying in execution. Economics is largely to blame: Video, audio and animated content can be expensive to produce at a time when many readers consider $15 an outrageous amount to pay for any e-book, no matter what bells and whistles come with it. As a result, a publisher has to charge less than the price of a hardcover for a book that costs more to create. That's no incentive to devote limited resources to developing new kinds of digital books.

Video clips, the most common add-on, can obviously add value to cookbooks or to more substantive nonfiction, such as Rick Perlstein's "Nixonland" or Sebastian Junger's "War" -- enhanced, respectively, with CBS news reports and clips from "Restrepo," the companion film Junger made with the late documentarian Tim Hetherington. Literature, however, is another matter. Most of the stuff appended to the digital versions of new novels, for example, consists of author interviews and background material, most of which can already be easily found online in one form or another. That's especially true if the author has been dutifully following the industry-wide directive to maintain a website, produce a book trailer, blog, engage with fans via social media and so on.

Given all these stumbling blocks, a $14 version of a famously enigmatic early 20th-century poem written by a decidedly unsexy dead guy -- and in the public domain, no less! -- would hardly seem the sort of thing to become a hit in the iTunes app store. Nevertheless, that's just what "The Waste Land" has done. Created by Touch Press (the same company that made the benchmark apps "The Elements" and "Solar System") and the British poetry publisher Faber and Faber, "The Waste Land" offers one of the best examples yet of how to make a successful literary app, often by contravening conventional wisdom.

First, "The Waste Land" is difficult; even T.S. Eliot acknowledged this in 1922, when he decided to publish notes along with the poem. Touch Press' version comes with even more notes (by B.C. Southam), illuminating the complex web of literary allusions in those immortal 434 lines. The usual titles at the top of e-book bestseller lists don't call for this sort of exegesis. There's not much call to dig deeper unless the book in question has some depth. I don't really need anyone to help me read a Stieg Larsson thriller, and I don't plan to be ruminating on it much once I'm done.

"The Waste Land" is also old. Which is to say, it has stood the test of time and readers can feel fairly confident that the effort they put into comprehending it will be rewarded. There are undoubtedly adventurous writers exploring the possibilities of digital texts at this very moment, but they suffer a disadvantage shared by any contemporary experimentalist: Most readers don't trust them not to waste their time. Apart from a valiant few, the majority would rather wait while someone else sifts through the dross.

Finally, "The Waste Land" is familiar. Publishers may tell themselves that students will buy the app because of its filmed performance by the great Irish actress Fiona Shaw and its audio recordings by Alec Guinness, Viggo Mortensen and the poet himself -- not to mention video commentaries by such luminaries as Nobel laureate Seamus Heaney. I don't think so, not when you can get a used paperback copy for a buck or just download the thing for free off the Internet.

Instead, the people willing to shell out a premium for "The Waste Land" app are more likely to be older, the sort who feel they could have gotten a lot more out of the poem in college if they'd only been a little less distracted by the temptations that assail freshman English majors. Eliot's poem is a bit daunting, but undeniably powerful, I told myself when a group of friends arranged a staged reading several years ago. I wish I knew it better, now that I'm more able to grasp its nuances. A new edition often provides the occasion for such revisits, which is one reason why publishers keep commissioning new translations of "Inferno" and "Madame Bovary."

It sure doesn't hurt that the app is so beautifully mounted. Shaw, who first toured her popular theatrical reading of the poem in the late '90s, recites Eliot's lines in a faded, crumbly Georgian interior that perfectly captures the prevailing tone of idle desiccation. The serenely austere page design conveys the flip side of the poem's desert imagery, a feeling that in this place where everything extraneous has been burnt away, some titanic revelation is imminent.

You can watch Shaw read for a while, then switch back to the text to check a reference or translation, then go on reading the lines to the accompaniment of Ted Hughes' very different vocal interpretation; the app keeps track of your place as you go. Eliot's friend Ezra Pound played a crucial role in shaping "The Waste Land"; and the inclusion of the original manuscript with Pound's handwritten edits offers a glimpse of that process. These various ways of approaching the text are enticements to the multiple readings that make a full appreciation of the poem possible.

Spending a day poring over "The Waste Land" app made me look at my old Norton critical editions with a new gleam in my eye. Instead of leafing through tissue-paper-thin pages of "Paradise Lost," squinting at the tiny footnotes, it would be so pleasant to scroll through Milton's epic (maybe with Gustave Dore's engravings?), tapping on the lines that cry out for elucidation while listening to a professional narrator vault the poet's enjambments far better than I ever could myself. How about "The Canterbury Tales," with an audio track in Middle English to juxtapose against a modern English translation? I would indeed pay for these, and the enthusiastic reception for "The Waste Land" app suggests that I am not alone.

"The Waste Land" app in the iTunes app store

Touch Press page for "The Waste Land" with video demonstration