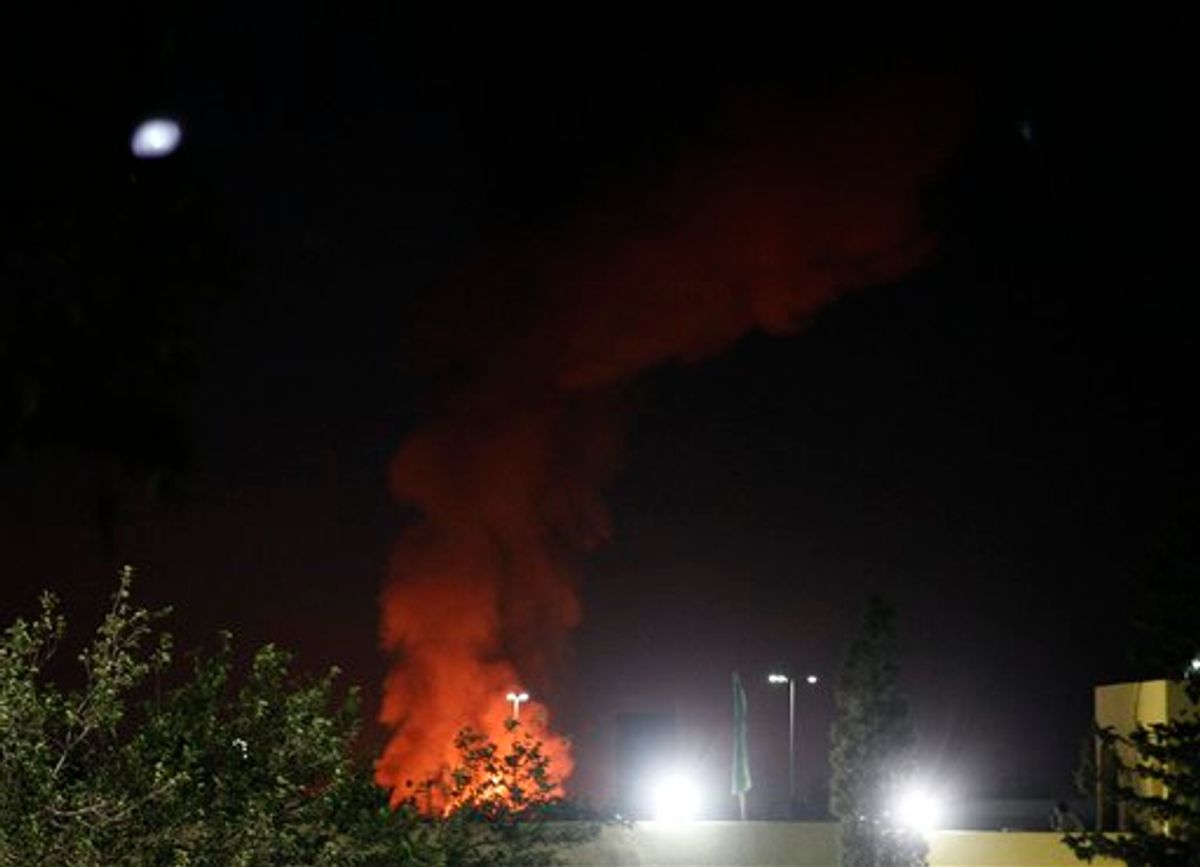 A plume of smoke and fire is seen after an airstrike in Tripoli, Libya, on Tuesday, June 14, 2011. NATO resumed its airstrike on the Libyan capital of Tripoli late Tuesday, blasting at least two targets just before midnight, after military leaders voiced concerns about sustaining the operations if the alliance mission drags on. (AP Photo/Ivan Sekretarev) (AP)
--

Facing questions from Congress, the White House is sending lawmakers a detailed report Wednesday outlining the objectives of U.S. military involvement in Libya and making a legal case for continuing the campaign.

White House spokesman Jay Carney said the more than 30-page report would answer inquiries posed in a non-binding House resolution earlier this month that chided President Barack Obama for failing to provide a "compelling rationale" for the Libya campaign. The measure asked the administration to respond to questions on the scope and cost of the mission by Friday.

Carney said the report would also include a legal analysis showing that the Libya campaign has been consistent with the War Powers Resolution, which prohibits the military from being involved in actions for more than 60 days without congressional authorization, plus a 30-day extension. House Speaker John Boehner says Obama's 90-day window runs out on Sunday.

Obama did not seek congressional consent for U.S. airstrikes against Moammar Gadhafi's forces. The White House insists there is a legal basis for continuing the mission, but has thus far provided no detail on what that is.

""I think that we have been acting consistent with the war powers resolution. We will continue the mission," Carney said Wednesday.

While the U.S. led the initial airstrikes on Libya, NATO forces have since taken over the mission, which is in its third month. However, the U.S still plays a significant support role that includes aerial refueling of warplanes and intelligence, surveillance and reconnaissance work.

Despite criticism from Capitol Hill, Carney said the president expects congressional support for the Libya campaign will continue. With Gadhafi under pressure to leave power, he said now is not the time to send mixed messages about U.S. commitment to the campaign.

A bipartisan group of 10 lawmakers sued Obama Wednesday for taking military action against Libya without war authorization from Congress. The lawmakers said Obama violated the Constitution in bypassing Congress and using international organizations like the United Nations and NATO to authorize military force.