What does Ayman al-Zawahri's ascendancy mean for the terror group and its global standing? 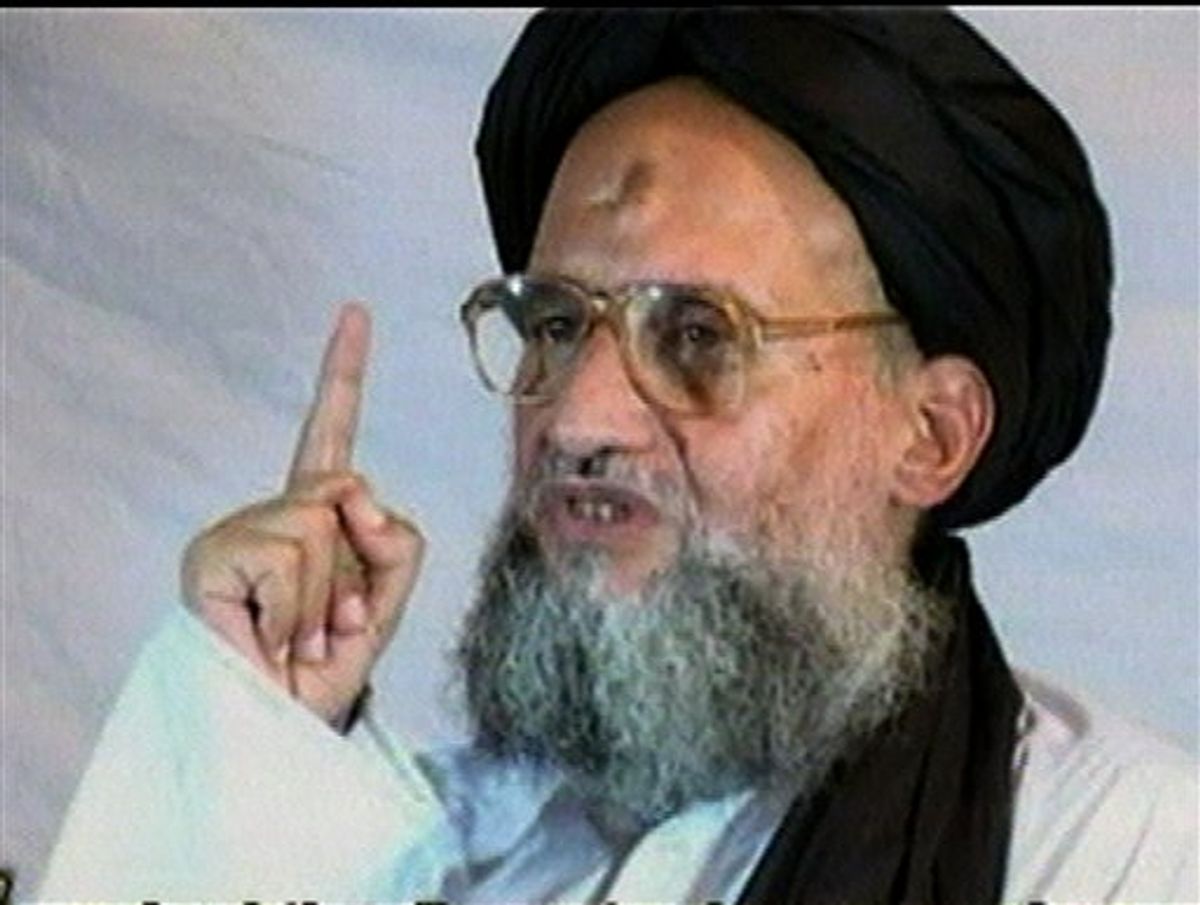 FILE - This image made from videotape posted on the Internet on Wednesday, Dec. 7, 2005 shows al-Qaida's then deputy leader, Ayman al-Zawahri. Al-Qaida has selected its longtime No. 2, Ayman al-Zawahri, to succeed Osama bin Laden following last month's U.S. commando raid that killed the terror leader, according to a statement posted Thursday, June 16, 2011 on a website affiliated with the network. (AP Photo/AP Television News, File) (AP)
--

As many predicted, al-Qaida has named Ayman Al-Zawahri their new leader and Osama bin Laden's successor. The announcement came from the terror group's ruling council and was announced through an affiliated Islamist website. The BBC translated relevant passages from the announcement, including the statement that "Since jihad is continuing until the Day of Resurrection ... the General Command of the al-Qaida Organisation announces, after completion of consultations, that Sheikh Dr Abu-Muhammad Ayman al-Zawahri, may God guide him to success, has taken over command of the group..."

Who is he? Al-Zawahri was born into a family of wealthy doctors and religious scholars in Cairo, but from a very young age became involved in Islamist activism. Al-Jazeera notes in a detailed profile that he "was reportedly arrested as young as 15 for being a member of the then-outlawed Muslim Brotherhood." al-Zawairi met Bin Laden in Saudi Arabia in 1986 and helped him found al-Qaida in the Pakistani city of Peshawar two years later.

The U.S. later indicted him for his role in the August 1998 bombings of U.S. embassies in Tanzania and Kenya, which killed 224 people and wounded several thousands. He was sentenced to death in absentia by an Egyptian military court for extremist activities.

Reports the Guardian: "After 2001 he became the most visible face of al-Qaida, appearing in video messages much more frequently than Bin Laden, spouting fiery rhetoric... Long been thought to be hiding in Pakistan's tribal belt, he escaped death in a 2006 drone strike on a house in Bajaur that killed 18 people. Other reliable reports over the past decade have placed him in north and south Waziristan."

What does this mean for al-Qaida? Al-Zawahri's appointment signifies an attempt by the group to reassert itself as a strong force; to present a united front six weeks after the death of bin Laden. However, in practical terms al-Zawahri's appointment, it seems, will not make a vast difference to the dynamics of the large and dispersed group; nor does it seem like it will alter al-Qaida's current geopolitical position. Al-Zawahri has long been considered a leading figure in the group, perhaps even the brains behind much of their operation. According to Al-Jazeera, A Cairo-based lawyer, Montasser al-Zayat, said: "Ayman is for bin Laden like the brain to the body."

Plus, al-Zawahri had already assumed the duties of acting leader. Dressed in a white tunic, the Egyptian surgeon turned terror leader warned the U.S. of a jihadist renaissance in a video:

"He's no longer giving instructions or going into detail but talking in general terms, like a leader, as Bin Laden used to," Baker Atyani, a Pakistani journalist a military expert, told the Guardian.

Chasing the Arab Spring: Thursday's announcement made specific reference to the revolts in Egypt, Tunisia, Libya Yemen, and Syria, praising the struggle of "oppressed Muslim people against the corrupt and tyrant leaders," reports Al-Jazeera. This suggests that the group is working to gain purchase amidst the chaos and power vacuums opening up in some of these sites of unrest. Indeed, as we wrote this week, the U.S. is stepping up its covert war in Yemen, citing fear that al-Qaida could gain ground (the group is indeed thought to have its most powerful faction in Yemen).

However, some are questionning whether al-Zawahri has the charisma to reach out to Islamist supporters throughout these regions: "Osama was much better at placating the various wings of al-Qaida – the Yemenis, the Somalis, the North Africans. I'm not sure Zawahiri can do that," Batyani told the Guardian.

Furthermore, many have argued that the Arab Spring has foreclosed on al-Qaida's relevance. New zones of political resistance that have emerged in these uprisings have not formed around al-Qaida. As the Guardian's Middle East editor, Ian Black, wrote following bin Laden's assassination: "the idea that al-Qaida poses a serious challenge to the Arab regimes is dead – and was dead long before Bin Laden's demise. The main wellsprings of change in the Middle East are happily not fed by his poisonous legacy."

What next for al-Zawahiri? What the new terror leader has planned and what he can achieve, no one can say. However, al-Zawahri has now officially replaced his predecessor as the world's most wanted fugitive, with a bounty of $25m for his capture. The U.K.'s Telegraph quips that al-Zawahri might have been rather nervous at the promotion interview. “Look – I don’t want to be rude, it’s really kind of you – but I’m not getting any younger. I’m not sure if I’ve got the drive any more. I just don’t leap out of the bed in the mornings these days with mass murder of infidels at the top of my priorities. Any chance I can take early retirement? I don’t mind losing my pension privileges. Surely Nigel in accounts would do it better?”

However, the hunt for al-Zawahri is sure to further draw out the heightened tensions between the CIA and Pakistan if the latter do not show themselves committed to helping the U.S. find their target.