She's better at playing this game than many of us thought. But she still flunks the Pat Robertson test 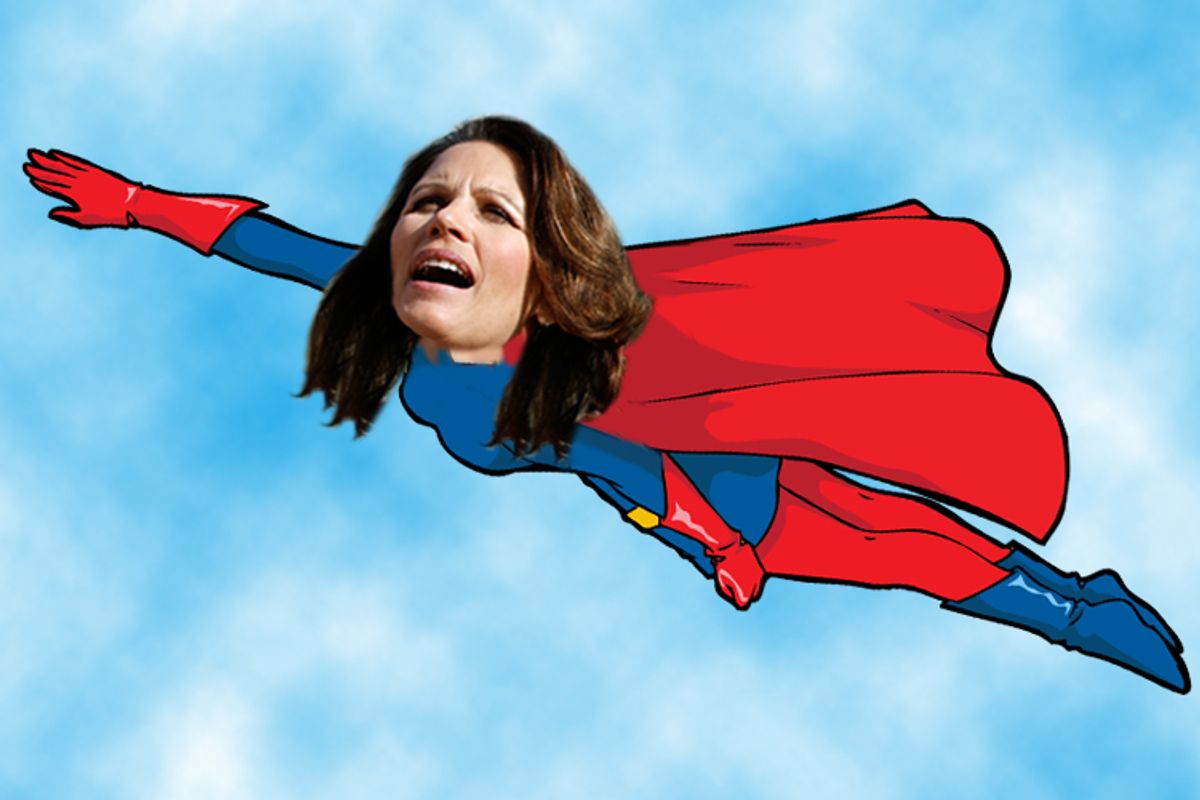 If nothing else, Monday's Republican presidential debate made those commentators who have been touting Michele Bachmann as a serious threat to win the GOP presidential nomination look like prophets.

The Minnesota congresswoman capitalized on a very low bar, turning in a glib and confident performance that defied the popular media caricature of her as an unhinged, bug-eyed lunatic, and stood out enough to convince even some skeptics that she could be a serious player in next year's race.

But let's not get carried away here.

Yes, Bachmann demonstrated on Monday that she has the potential to make serious inroads with grass-roots conservatives -- particularly Christian conservatives. If the debate was any indication, she's better at communicating with these voters than any of the other ideological candidates on the GOP side (like Rick Santorum, Herman Cain and Newt Gingrich). She's also adept at raising money (she took in $13 million for her 2008 reelection effort).

It's a long way from here until the primaries and caucuses actually begin, but if she can keep this up, Bachmann could very well end up winning (or coming close to winning) Iowa, where Christian conservatives comprise a particularly crucial chunk of the electorate. Iowa, after all, is where Pat Robertson finished in second place -- beating out a sitting vice president, George H.W. Bush -- in 1988 and where Mike Huckabee posted a 9-point victory in 2008. But the Robertson and Huckabee examples are instructive, because they faced the same two obstacles coming out of Iowa -- obstacles that Bachmann would face as well.

The first is New Hampshire, which holds its first-in-the-nation primary just days after Iowa. And the Granite State's electorate -- even its Republican electorate -- tends to look with suspicion on candidates who aggressively mix religion and politics. This doesn't mean that New Hampshire Republicans are moderates; it's just that they tend to favor a more libertarian brand of conservatism -- far to the right on economic issues, but indifferent to the culture wars.

Thus, the state served as a brake on both Robertson's and Huckabee's momentum. Robertson ended up finishing dead last among active candidates, with 9 percent of the vote, edged out even by former Delaware Gov. Pierre S. du Pont IV (the favored candidate of the Manchester Union Leader). Huckabee fared a little better in '08, but not much, nabbing 16 percent -- 20 points behind John McCain and 15 in back of Mitt Romney.

Granted, both Robertson and Huckabee, realizing how ill-suited for New Hampshire they were, sought to downplay expectations before the primary. But given how heavily they'd relied on religious voters in Iowa, their lack of appeal in New Hampshire served as a reminder to the media and political worlds that they were still fundamentally niche candidates.

This ties into the second post-Iowa obstacle that Robertson and Huckabee faced: hostility from party elites.

In Robertson's case, the party's elites -- a loose network of elected officials, interest group leaders, fundraisers and commentators -- recognized that his televangelist background would make him general election poison. This was a man who just three years earlier claimed to have prayed Hurricane Gloria away from New York City. Until Iowa, they'd mostly been content to leave him alone.

But when Robertson finished in second place there (behind Bob Dole, a Kansan who was regarded as something of a favorite son), everything changed. Virtually every Southern state had scheduled its primary for three weeks after New Hampshire -- the first real "Super Tuesday." And each of those Southern states contained a significant number of evangelical voters -- more than 50 percent of the GOP electorate in South Carolina, which would vote before the rest of the Southern states. Robertson predicted victory, there and across the South, and after Iowa, it was hard to dismiss this as empty bluster. Here's how U.S. News wrote up his prospects at the time:

[Robertson] figures as few as 7 million Republican votes can determine the nomination. (Walter Mondale won the Democratic nomination in 1984 with 6.8 million votes, and Ronald Reagan won the 1980 Republican nomination with 7.7 million GOP votes.) The 7 million, if that's what he really needs, are already targeted through his collection of 3 million petition signatures and the massive lists he has developed through his CBN television network, direct mailings, church-membership rolls and the recipients of tens of millions of dollars of social-work and church-aid programs he has created.

The winning number is as few as a third of those in the country who, like Robertson, are charismatic Christians -- those who seek spiritual gifts such as speaking in tongues and faith healing. More to the point, it represents just a quarter of those who regularly watch Robertson's ministry on his television show, "700 Club." Robertson can rattle off how many CBN viewers there are in a region and how many should vote for him to win. "Pat Robertson has been planning this for many years," said a friend. "He once told me, 'Getting nominated is really a question of mathematics, and I'm the best equipped to win because I know better than anyone else where my supporters are.'" While many think he is as gifted as Ronald Reagan in performing on TV, his real strength is that no politician ever understood the business side of television marketing as Robertson does.

In theory, the numbers were there for Robertson to roll to the nomination -- especially when you considered how little natural appeal Bush (a Yankee Republican who had supported abortion rights and the ERA in his 1980 campaign) and Dole (a quintessential Capitol Hill compromiser) had to the religious right. But GOP elites recognized this danger, and when Bush posted a solid 9-point win over Dole in New Hampshire, they closed ranks behind the vice president, vouching for his conservative credentials and steering the masses away from Robertson. South Carolina wasn't even close. Bush took it with 49 percent, to Dole's 21 and Robertson's 19. Rank-and-file Christian conservatives had been influenced by the elites. As the Washington Post reported:

Robertson targeted South Carolina on the assumption that the exceptionally high percentage of "born-again" Christians, including charismatics and pentecostals, would boost his bid. As expected, the born-again vote was a key to victory here, according to the ABC News exit polls. But not for Robertson, who had courted the Christian Right vigorously in the state where half of all GOP voters describe themselves as born-again. Among those voters, Bush got 36 percent of the vote and Robertson got 35 percent, while among self-described evangelicals, the vice president had 30 percent to Robertson's 34 percent.

That result was replicated across the South on Super Tuesday, with Bush sweeping every state, generally followed far behind by Dole and Robertson.

For Huckabee 20 years later, elite hostility also proved fatal, although it was only partly rooted in general election concerns. Given his background as a governor and his friendly, reassuring style, he wasn't quite as easy to pigeonhole as a polarizing, fringe figure. Still, there were concerns among some Republicans that his background as a Baptist preacher and some of his religious views (on evolution, for instance) would cause problems if he were the nominee. Another issue with some elites was his refusal to embrace the pure, market-based conservatism of the Club for Growth, the Wall Street Journal editorial page, and other important forces on the right. This stunted Huckabee's post-Iowa growth too. Even though he should have been a natural fit for South Carolina, he ended up losing the state to McCain, a result that essentially ended Huckabee's nomination hopes.

What does all of this mean for Bachmann? She's a three-term congresswoman, so when it comes to credentials, she's closer to Robertson than to Huckabee, who'd been a governor for a decade. And while she is a strong communicator, her history of alarming and inflammatory rhetoric also matches Robertson's. In other words, she figures to ring all of the warning bells with elites that Robertson rang back in 1988 -- meaning that if she breaks through and scores one early win next year, they will mobilize immediately to make sure it doesn't happen again. You can argue that the GOP is different now than it was 20 years ago -- more conservative, more religious, more open to picking someone like Bachmann. There's some truth to this, but it only goes so far. Elites still ultimately control the process, and there's no reason to believe they will ever line up behind Bachmann. She can definitely cause her party some serious headaches next year. Just don't bet on her winning the nomination.