No one is particularly thrilled with him, but the unemployed former governor is still the primary front-runner 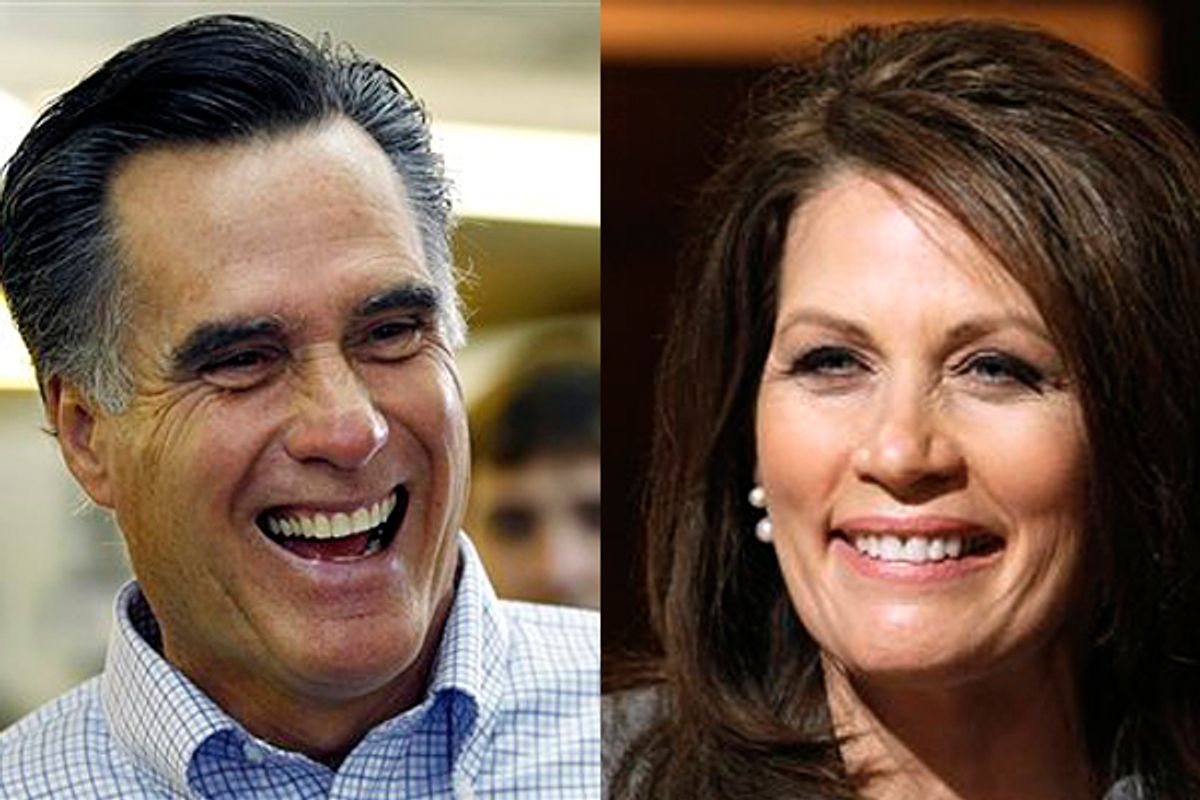 A Rasmussen poll of likely GOP primary voters, taken after this week's Republican presidential debate, shows that the de facto front-runner is still the front-runner. Mitt Romney, the guy with all the money and the campaign experience and the organization and name-recognition, is in first place:

[The poll shows] Romney earning 33% support, with Minnesota Congresswoman Michele Bachmann a surprise second at 19%. Georgia businessman Herman Cain is in third place with 10% of the vote.

Pawlenty, the guy pundits insist is supposed to be taken seriously, is at 6%. That's less than Ron Paul.

The Weekly Standard points out that a Wall Street Journal poll, taken before the debate, that included Sarah Palin and Rick Perry, had Mitt Romney still on top but Palin in Bachmann's second-place spot, with 14%. The Standard notes dryly that this "seems to indicate there is some overlap between the Palin/Bachmann constituencies." Meanwhile, a PPP poll has Romney winning among voters who care about "electability."

But these are "scientific" polls of "likely voters." What does an Internet poll of teabaggers tell us about the state of the 2012 race? It's a bit different. MyTeaParty.org's head-to-head "run-off" tracking poll has Paul Ryan and Chris Christie on top. But they are not actually running. Among the announced candidates, the craziest ones have the most support. The Standard, again:

The candidates basically fall into three groupings, with Bachmann by herself in first (8 percentage points ahead of anyone else); Pawlenty, Gingrich, Cain, and Santorum in the middle group; and Paul, Romney, and Huntsman (all at least 9 points behind the middle group) bringing up the rear.

You have to feel bad for Ron Paul, the guy who actually invented this Tea Party crap. Running behind Gingrich, among people who wrap themselves in Gadsden flags and babble about liberty!

Obviously national polls aren't a great measure of what will happen in a drawn-out primary process, but Mitt is still looking pretty good. At most, Michele Bachmann could sabotage the nominating process if she really wanted to, next year. Maybe we'll get a Romney/Cain ticket, to satisfy the tea people! That would be the best vice presidential debate... ever?