Congresswoman still struggles to speak and walk, and will need daily, intensive therapy 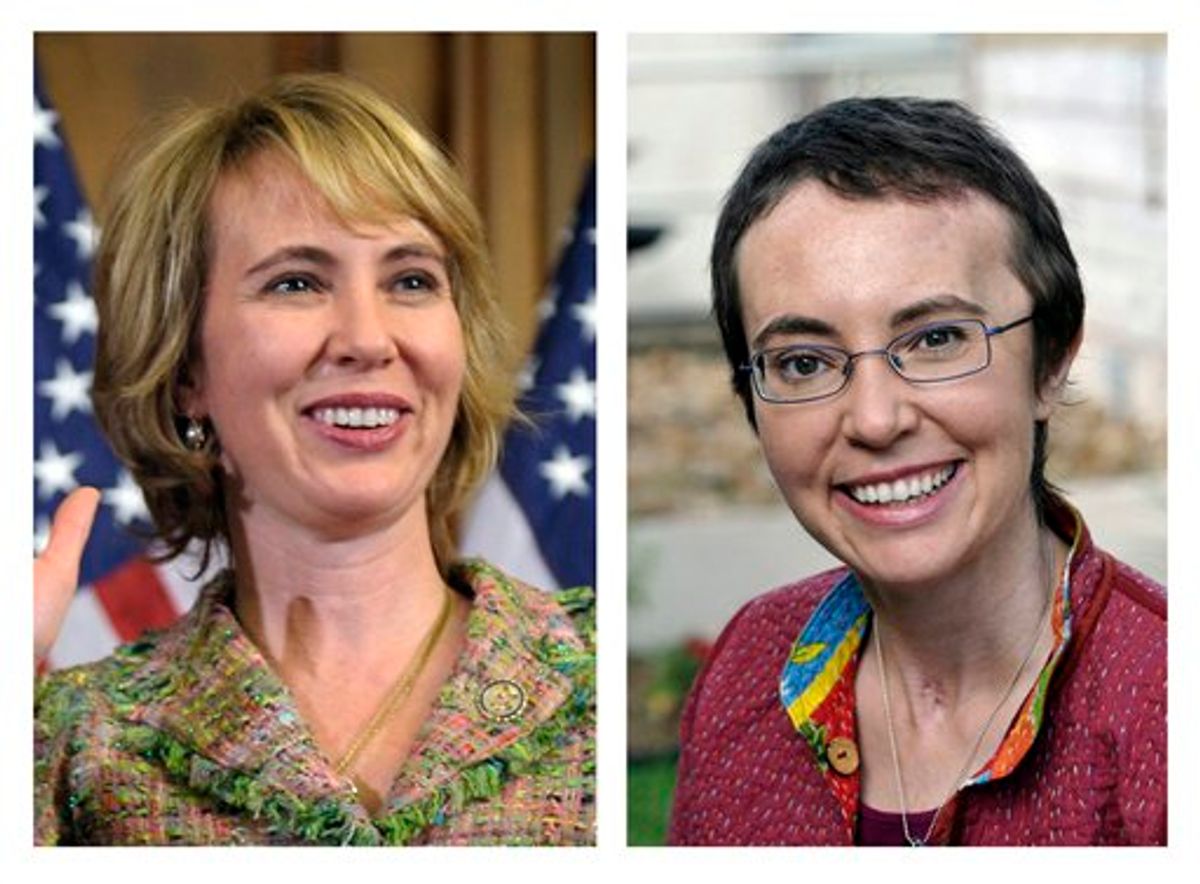 This photo combo shows U.S. Rep. Gabrielle Giffords, D-Ariz. At left, Giffords takes part in a reenactment of her swearing-in on Capitol Hill in Washington, on Jan. 5, 2011, three days before she was shot as she met with constituents in Tucson, Ariz. At right, Giffords is seen May 17, 2011, at TIRR Memorial Hermann Hospital in Houston, the day after the launch of space shuttle Endeavour and the day before she had her cranioplasty. Giffords has been released from a Houston hospital, Wednesday, June 15, 2011, five months after being shot in the head during a Tucson political event. (AP Photo/Susan Walsh/P.K. Weis) MANDATORY CREDIT (AP)
--

Rep. Gabrielle Giffords has returned home to continue her recovery from a devastating head wound, but will make daily trips to the Houston hospital where she began to rebuild her life after a gunman shot her five months ago.

She struggles to speak and walk, and will need daily, intensive therapy. Whether she will ever recover enough to resume her congressional duties is still unknown.

But doctors, her astronaut husband Mark Kelly and experts who have been observing Giffords' recovery emphasize that going home is a key milestone and could help stimulate her progress.

"Anyone who knows Gabby knows that she loves being outside," Kelly said in a statement released by the hospital. "Living and working in a rehab facility for five months straight has been especially challenging for her."

Giffords will still go to the hospital each day where she will participate in speech, music, physical and occupational therapy with the same team that has treated her since she arrived in Houston in late January.

Now, however, at the end of each day "she will be with her family," Kelly said.

The congresswoman will move to Kelly's home in League City, a suburb near the Johnson Space Center, where she will have 24-hour help from a home care assistant.

The 41-year-old was shot in the left side of the brain, the part that controls speech and communication, on Jan. 8 while meeting with constituents in Tucson. Six people were killed and 13 wounded in the attack, including the lawmaker and members of her staff.

Her release from the hospital was met with excitement.

"When I went home from the hospital after surgery, I was so nervous, but boy it's wonderful to be home in your own surroundings, to be able to have things on your own schedule," said Ron Barber, who also survived the shooting.

"I'm sure it'll be uplifting and healing for her, too," he said.

Jordan Grafman, director of the Traumatic Brain Injury Research Laboratory at the Kessler Foundation Research Center in West Orange, N.J., said being around family often motivates patients. He warned, however, that the congresswoman is far from healed and will has many months, years and even a lifetime of recovery ahead of her.

Giffords' Chief of Staff Pia Carusone recently gave the first clear indication of how slowly Giffords is recovering. After months of optimistic, rosy reports from Giffords' doctors, staff and family, Carusone said that while the congresswoman can speak, she struggles to express complex thoughts and sentences.

"Her words are back more and more now, but she's still using facial expressions as a way to express. Pointing. Gesturing," Carusone told the Arizona Republic.

"Add it all together, and she's able to express the basics of what she wants or needs," Carusone said. "But when it comes to a bigger and more complex thought that requires words, that's where she's had the trouble."

Better news came on Sunday, when the first pictures of Giffords since the shooting were posted on her Facebook page. Although wearing glasses and sporting shorter, darker hair, there were few indications she had been injured, let alone shot in the forehead.

One image showed her smiling broadly and looking straight at the camera. In another, more candid shot, she is grinning alongside her mother. In both, her trademark smile is largely unchanged.

The pictures were taken shortly after Giffords' returned from Florida in May, where she traveled to watch Kelly command the space shuttle Endeavour's last mission. After that, while Kelly was still far from Earth at the International Space Station, she underwent surgery to replace a piece of her skull that was removed shortly after the shooting to allow her brain to swell. Until the surgery, she wore a helmet to protect her head.

"Gabby has recovered well from the surgery," neurosurgeon Dr. Dong Kim said Wednesday. "Her wounds have healed, she has resumed full physical therapy without a helmet, and I am comfortable that she can be discharged."

Kelly returned June 1 from his 16-day shuttle mission, and is now home to be with his wife.

The couple met in 2003 during a young leaders' forum in China, then married in 2007 in Tucson. Giffords divided her time between Washington, D.C., and Arizona, while Kelly remained in Houston.

The two saw each other whenever and wherever they could.

A judge has declared shooting suspect Jared Loughner mentally incapable of participating in his defense and sent him to a federal facility where doctors will try to treat his condition and make it possible to put him on trial.

With an open Senate seat in Arizona, some Democrats had viewed Giffords as one of their best hopes for winning it, before the Jan. 8 shooting threw her political future into question.

The shooting has created something of a vacuum, with few candidates willing to declare their interest until Giffords' situation is clarified. Carusone has only said that the congresswoman has until May 2012 to decide.

"This is just one of the next really major steps toward her recovery," he said. "I'm sure she'll count this as another step just as we all do."