The rapid rise and spectacular fall of Anthony Weiner

He chased cameras, stepped on toes and cut corners. And it worked beautifully -- until Memorial Day weekend 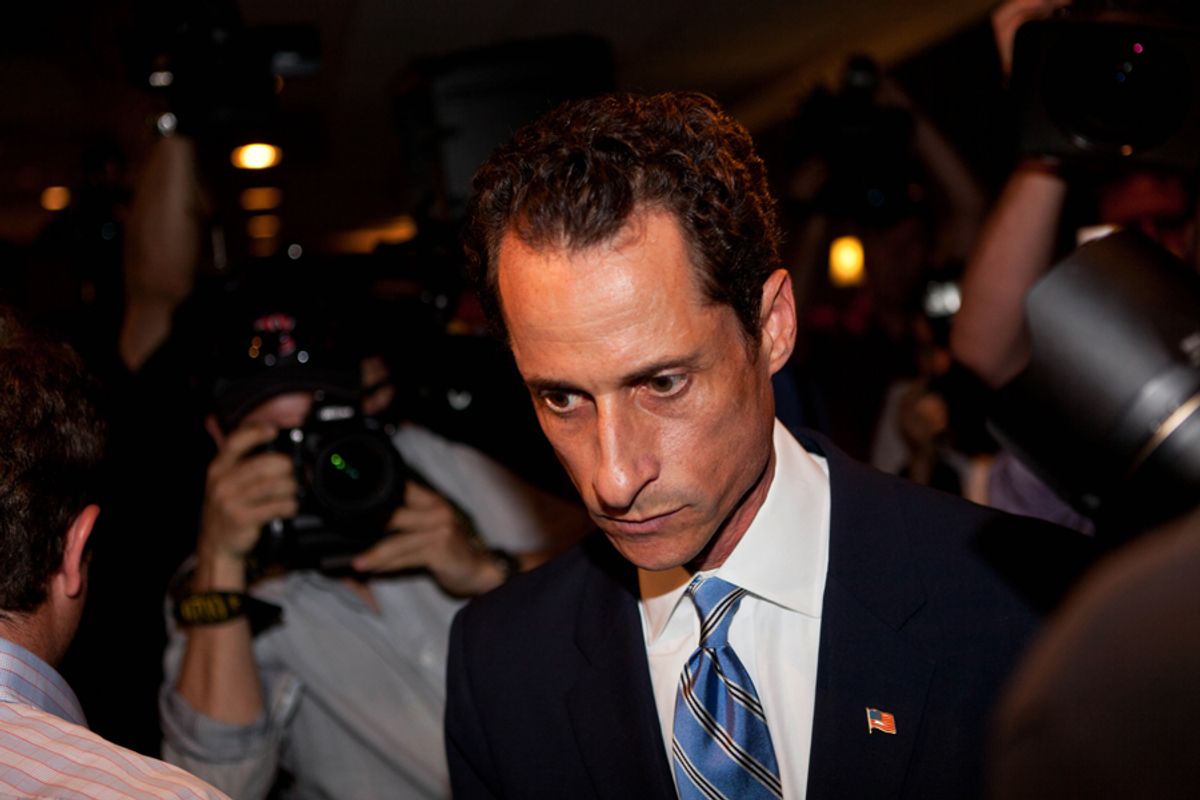 FILE - In this June 6, 2011 file photo, U.S. Rep. Anthony Weiner, D-N.Y., leaves a news conference in New York, where he confessed that he tweeted a bulging-underpants photo of himself to a young woman and admitted to "inappropriate" exchanges with six women before and after getting married. According to AP sources, on Thursday, June 16, 2011, Weiner tells associates he will resign. (AP Photo/John Minchillo, File) (John Minchillo)
--

The way the last week has gone, Anthony Weiner's decision to resign from Congress isn't that surprising. Obviously, it's impossible to say what the future holds for him. This is America, the land of second (and third and fourth and fifth...) chances, so it's entirely possible that he'll be back on the public stage someday, maybe even soon.

But at least for now, Weiner's exit from Congress puts an end to the dreams of political glory that he spent the last 26 years pursuing with relentless tenacity -- and that, before his online scandal began breaking Memorial Day weekend, he seemed on the verge of achieving. Here are the major milestones in the making and unmaking of a political star:

1985: Weiner, a Brooklyn native, graduates from SUNY-Plattsburgh, where he'd originally matriculated with dreams of becoming a television weatherman. But a visit to campus from a congressman changed his mind, and he threw himself into campus politics during his junior year. Upon graduation, he heads to Washington to work as an intern in the office of Rep. Charles Schumer, then a third-term congressman whose district includes Park Slope, where Weiner grew up. Weiner quickly works his way up the ladder.

1988: Itching to enter elected politics himself, Weiner faces a dilemma. His instinct is to leave Washington and move to Florida, which is due to receive several new House seats after the 1990 census -- in areas where a New York transplant with the name "Weiner" might do very well. But Schumer counsels him to return to Brooklyn instead, even though there are no obvious openings on the horizon. Weiner listens to his boss and moves back to New York to serve as his district director.

1991: The opportunity he's been looking for arrives when the New York City voters ratify a new charter that expands the City Council from 35 to 51 seats. One of the new districts -- the 48th -- is in an overwhelmingly white, heavily Jewish swath of southern Brooklyn, the heart of Schumer's district. Weiner jumps in the race, but he's a heavy underdog: Two well-established pols -- Michael Garson and Adele Cohen -- appear to have the inside track. But Weiner campaigns relentlessly and earns positive reviews for his energy and impressive performances in debates and forums. He also launches an ugly, anonymous attack at the last minute -- a race-baiting mailer that links Cohen to the "Dinkins/Jackson agenda," just days after the Crown Heights riot. Weiner ekes out a narrow victory (125 votes over Garson and 195 over Cohen) and only then admits that he was behind the flier. He's excoriated in a New York Times editorial, but it doesn't matter. The general election is a formality and at 27 years old, Weiner becomes the youngest City Council member in New York history.

1998: Schumer announces that he will give up the 9th District seat he's held since 1980 to run for the U.S. Senate. Weiner, who has made plenty of noise but racked up few meaningful achievements on the council, announces that he'll seek to replace Schumer. Once again, he's the underdog in the Democratic primary. The favorite is Melinda Katz, a 33-year-old state assemblywoman who is the only candidate from Queens -- which accounts for half the district -- in the race. She's also the sole female. There is also Noach Dear, a right-wing Orthodox Jewish councilman and a major national Democratic fundraiser, and Dan Feldman, a longtime state legislator who had replaced Schumer in the Assembly in 1980. But just like in '91, Weiner out-hustles his foes and wins positive press for his vigor and tireless campaigning. There's a late endorsement from Schumer (who was locked in his own primary battle against Geraldine Ferraro and Mark Green), the effect of which is still in dispute. With 29 percent of the vote and by a margin of a few hundred votes, Weiner defeats Katz. After coasting through the general election, Weiner becomes a member of Congress.

2005: Weiner sets out to run for mayor of New York, the job he's had his eye on since his council days. As a member of Congress, he's done little to distinguish himself; his most high-profile moment probably came in the fall of 2001, when an unflattering Vanity Fair story detailed late-night carousing by Weiner and several of his colleagues in the days and weeks after 9/11.

He bases his mayoral campaign strategy on the one that Ed Koch used in 1977: Focus on the less liberal Jews and "white ethnics" of the outer boroughs. Weiner again stands out from his opponents -- Fernando Ferrer, Gifford Miller and Virginia Fields -- and steadily rises in the polls. As the Democratic primary approaches, he moves into second place behind Ferrer. When the votes are counted, it initially appears that Weiner has qualified for a runoff, with Ferrer falling a fraction of a point short of the magic 40 percent threshold and Weiner 10 points behind him in second place. Weiner knows what the smart play is: The actual nomination is a worthless prize (Michael Bloomberg, after bottoming out in 2003 and 2004, has rebounded and is now overwhelmingly popular), so Weiner quickly announces that he won't contest a runoff and endorses Ferrer. He wins points for being a team player and leaves Ferrer to face a Mondale-esque November drubbing. (Days later, a recount determines that Ferrer actually did break 40 percent in the preliminary, so Weiner wouldn't have been eligible for a runoff anyway.)

2008: Weiner prepares to launch his next mayoral campaign, and this time, he will be one of the favorites. There'll be no incumbent, thanks to term limits, and there's no one on the Democratic side he's not capable of beating. But then Bloomberg cuts a deal with the City Council to scrap the term limits law and announces he'll run again. But Weiner presses ahead, blasting Bloomberg's power grab and insisting that he won't be intimidated.

2009: The Bloomberg campaign begins planting unflattering stories about Weiner in the New York media -- involving missed votes in Congress and fundraisers involving international supermodels -- and the congressman gets cold feet. At the end of May '09, he announces that he won't run for mayor.

Not at all coincidentally, it's around this time that Weiner begins showing a sudden interest in congressional and national politics -- and, more specifically, in talking about congressional and national politics on cable news programs. For producers, he's a perfect guest -- smart, glib, cocky and provocative. With the healthcare reform debate heating up, Weiner begins championing a single-payer system. It's an issue he's previously shown no interest in and that has zero chance of winning enactment. His sudden activism is an unwelcome surprise to many single-payer advocates in the House, who conclude that Weiner is using the issue to win attention for himself. In the summer of 2009, Weiner becomes a genuine cable news all-star, attracting a new national fan base of liberal viewers. But there's a clear New York angle: By championing their causes in the national media, Weiner makes a new, much more favorable impression on liberal voters in Manhattan and Brownstone Brooklyn -- voters who, combined with his outer-borough base, could make Weiner unstoppable in a 2013 mayoral primary.

2010: Weiner's hero status to liberal activists is affirmed by a House floor rant against Republican obstructionism on a healthcare bill for 9/11 workers. But Weiner's own Democratic colleagues, particularly those from New York, see his theatrics much differently. Several New York members -- most notably Jerrold Nadler and Carolyn Maloney -- had labored to craft the 9/11 bill and to win over Republican support, but Weiner had played no meaningful role before the floor debate. "He almost blew up the [expletive] bill," one disgruntled New York member later tells the Washington Post. The episode perfectly illustrates the conflicting realities of Weiner's new role in politics: To activists outside Washington, he's a refreshing voice shaking up Congress; to his own colleagues, he's a camera-seeking nuisance who's interested in gaining publicity for himself -- not in doing any substantive work.

2011: After a concerted effort by his fellow Democrats to push him out, Weiner finally decides to resign from Congress. He is 46 years old. There will be no mayoral campaign in 2013, and probably ever.