President, house speaker tee off on pressing policy matters during round of golf 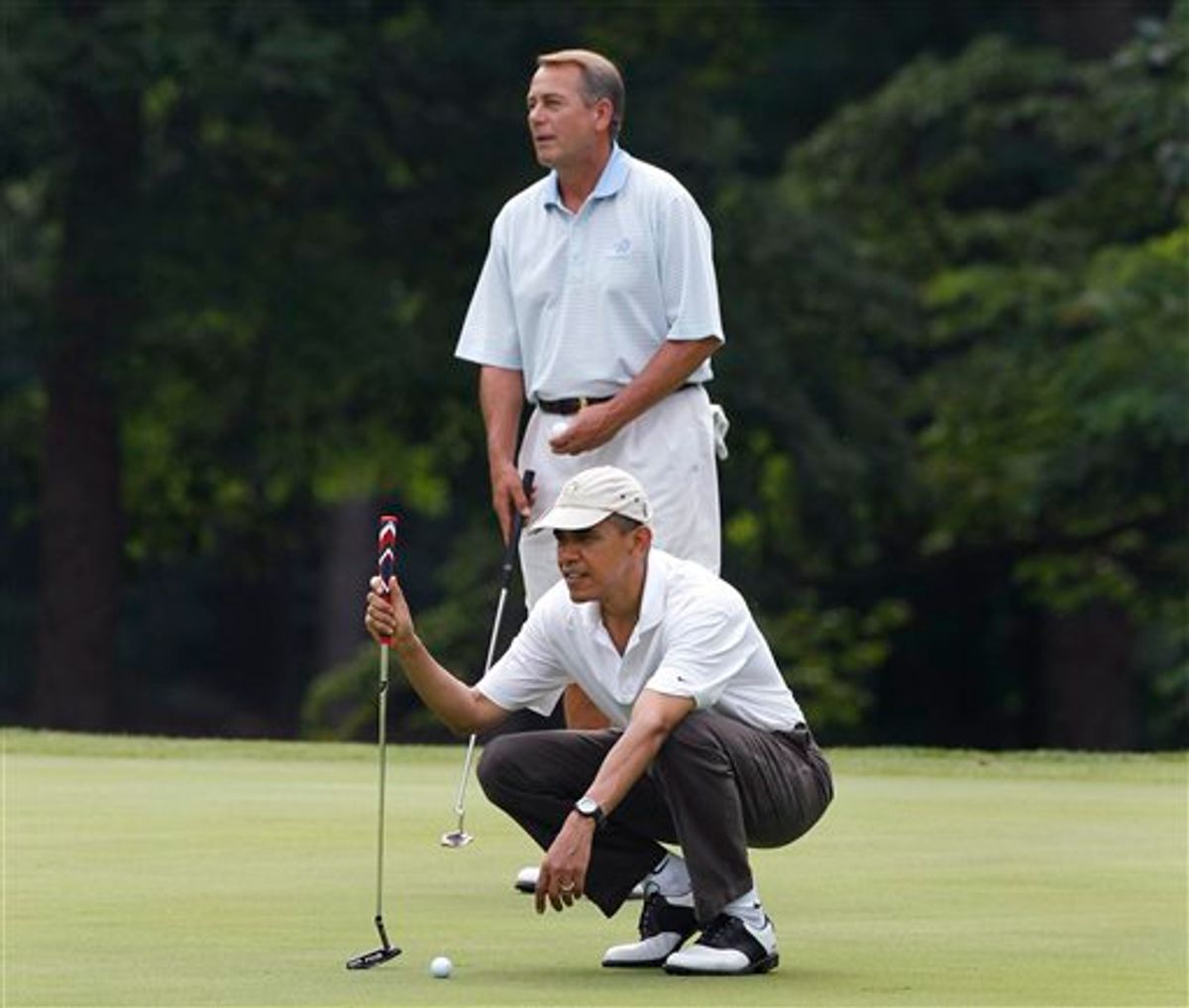 President Barack Obama and House Speaker John Boehner should get a chance to discuss more than birdies and bogeys during their much anticipated golf outing at a military base outside the nation's capital.

Aides say the time that Obama and Boehner are spending on the course at Joint Base Andrews on Saturday could help improve a relationship that's respectful, but hardly close.

But 18 holes probably won't give them enough time to hash out their policy differences on everything from the debt to the U.S. military involvement in Libya.

"Spending a number of hours together in that kind of environment I think can only help improve the chances of bipartisan cooperation," White House spokesman Jay Carney said.

"It certainly can't hurt it -- unless someone wins really big," he added.

Boehner is considered one of Washington's best golfers. Obama is not in that league.

The outing comes against the backdrop of negotiations between the White House and Congress over a long-term deficit reduction plan that will set the stage for increasing the amount of money the government can borrow.

Republicans have insisted on significant cuts of about $2 trillion over 10 years or 12 years before agreeing to increase the current $14.3 debt ceiling, which the government says it will surpass Aug. 2.

Vice President Joe Biden is leading a group of bipartisan lawmakers in deficit talks, and he was down to be Obama's golf partner.

Boehner picked a fellow Ohio Republican, budget-cutting Gov. John Kasich, to join him for the round. Kasich was House Budget Committee chairman in the 1990s when Republicans were negotiating budgets with Democratic President Bill Clinton.

While both sides say they're optimistic about the progress being made in the deficit talks, Boehner has suggested he and the president may need to get more closely involved in order to reach a deal.

The White House has played down any expectations about that happening on the golf course.

"I can say with great confidence that they will not wrap up the 18th hole and come out and say that we have a deal," Carney said.

Policy tensions between Obama and Boehner also have extended to the U.S. military campaign in Libya.

Boehner led the House in passing a resolution that chastised Obama for failing to provide a "compelling rationale" for U.S. involvement, and has said Obama is in violation of the War Powers Act. In return, the White House has sought to discredit Boehner's position on the act, sending reporters old statements Boehner made questioning the constitutionality of the measure.

Boehner had a clear advantage over Obama on the scorecard.

The speaker reportedly shoots in the low-80s, good enough for the magazine Golf Digest to recently rank him 43rd among 150 prominent Washington golfers. The president, on the other hand, was ranked 108th.

"Boehner's a much better golfer than I am, so I'm expecting him to give me some strokes," Obama said in a recent television interview.

The president is likely to get a boost from Biden -- Golf Digest's 29th best golfer in Washington.

They are playing in private, but cameras were promised a quick glimpse of the foursome on the course.

White House officials are playing coy about whether they will release the score.