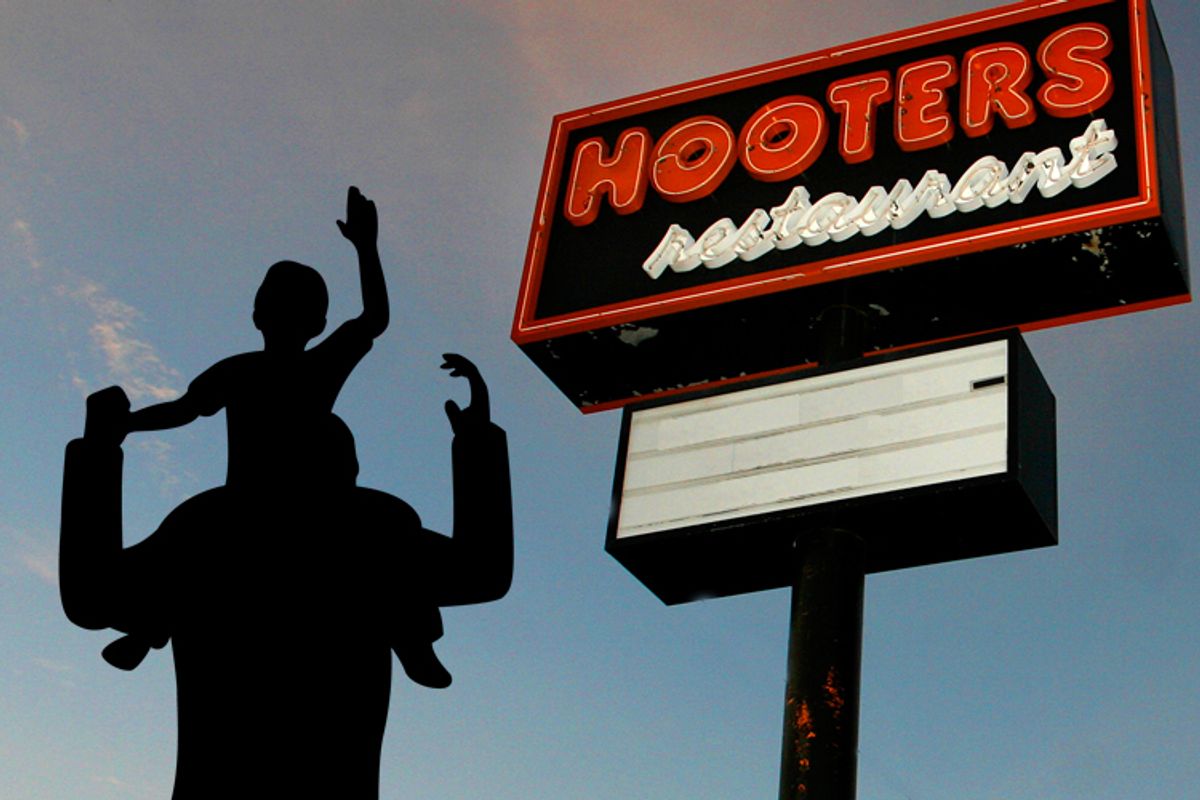 I'm kinda fond of Hooters. As chain restaurants go, it is a fine establishment with a specific culinary point of view. Food-wise it never tries to be anything it isn’t. The food is deeply fried and tastes like shame, but the bathrooms are always very clean. The domestic beer is served in a frosty cold mug.

The service is spectacular, and I'm not making a dumb joke about boobs here. I've had waitresses scare me up cigarettes after casually mentioning that I'd love a smoke, I've had waitresses offer to watch my computer while I go have a cigarette or make a run to one of the pristine bathrooms, I've even gotten the rare corporate beer buy-back. But mostly, the service is attentive and friendly without being overbearing and obnoxious, which is sort of an amazing feat considering the dress code.

And speaking of the dress code, while those tank tops can be kind of awe-inspiring, the Hooters ensemble, as a whole, is a turn-off. It looks like it was developed by a colorblind exercise fetishist in 1983. It's a hard look for most earth women to pull off successfully.

So I didn't think it would be weird to take the kid to Hooters.

I had never taken either of my kids to Hooters before, especially not at night when random bikini or lingerie contests occasionally break out, because I'm not sure my daughter needs to be exposed to that kind of awkward chaos just yet. But in the daylight hours, Hooters not only has fried pickles, but it also has high chairs, and a kids' menu, although I might argue that it's all a kids' menu. (And now might argue that the kids' menu is an affront.)

After all, I've taken my daughter to much seedier establishments around Philadelphia in pursuit of sandwiches. Why not try a clean corporate world with a weird dress code? Outside a sandwich shop in South Philly a man with an unintentionally exposed handgun in his waistband once tickled my daughter's chin to make her laugh and told me what a lucky guy I was. Nice fella.

My daughter has also seen women (occasionally working) in much skimpier outfits, and the fabric of our family has not been torn asunder as a result. In fact, when I met my daughter's mother, she was working behind a bar in a place that served wings and she was wearing a top that was nearly, if not equally, form fitting as those found at Hooters. I thought it might even be a good lesson for my daughter to see that we don't judge or treat people differently because of the way they're dressed, and that people are not the sum total of their apparel; for instance, I am not a hobo, even though I dress like one.

I expected to walk into Hooters at 11 a.m. and have a bunch of bored waitresses fawning all over my daughter. We'd get attention and good laughs, maybe even a comped order of mozzarella sticks, and my daughter would see how casually and normally Daddy interacts with women in tight tank tops.

Instead we walked in at 11 a.m. on a Tuesday and found a smattering of guys sitting by themselves or in pairs at the bar already drinking hard and vying for attention from waitresses who looked seriously thrown off their rhythm by the arrival of a 2-year-old.

It was in that moment that I realized that beyond all the debate about exhibitionism and objectification, Hooters is a bar, and forcing your kid on a group of adults who want to get drunk is a dick move, especially guys who want to get drunk at 11 a.m. on a Tuesday ... at a Hooters. That type of guy is looking for something a little more extreme to go with his problems than what the corner bar has to offer.

But more important, my daughter's presence obviously affected the way the waitresses could deal with those guys. The kid's presence was disrupting the ever-shifting balance of power between client and patron in a sexually charged alcohol-fueled situation. I had upended the delicate Hooters ecosphere.

The guys who had just been joking with the bartenders looked at me like they would like to strangle me with a pair of flesh-toned leggings. The waitresses were cold; instead of the usual big, "Welcome to Hooters!" I got a clipped, "Can I help you with something?" Instead of being shown to our table we were hemmed in by a stony-faced phalanx of orange-and-white-clad servers who silently established a perimeter around us preventing entrance into the main dining room or access to a table by the bar, a well-endowed Praetorian Guard, protecting the sanctity of their establishment from the sticky-fingered cuteness of my 2-year-old. They were all cold eyes, and concerned looks, whereas normally it's all about smiles and calisthenics. They looked at me like I was stupid for bringing my daughter to Hooters. Me! Stupid?! I had never had icy service at Hooters, but as the greeter had a muffled conversation with one of the other perimeter guards and pointed at me and my daughter I made the command decision to get our fried pickles to go.

The next 10 minutes were some of the longest of my life. As we waited for our order, the only sound was the replay telecast of Duke vs. the University of Eastern Irkutsk -- or whatever the hell ballgame is playing on Tuesday at 11 a.m. on ESPN2. My daughter was understandably mesmerized by the bright orange shorts and the ladies with hair extensions. She made entreaties to be noticed by some of the waitresses and she was rebuffed with extreme prejudice. Then she headed over to start gabbing at some of the guys at the bar, who did not seem to offer the smiles she is so used to receiving. I picked her up and held her until our pickles finally arrived. As the door closed behind us, I could hear the 11 a.m. Hooters fiesta begin again.

Perhaps it would have been different if we were there for the lunch rush when the place was packed, but I'm not willing to take the chance again. Hooters touches the holy trinity of guydom with booze, sports and women's sexuality. And it's not fair to anyone to slap a kid in the middle of it. Not to the people who work there and have to worry about the kid's safety and boundaries, and not to the kid, who wonders why everyone is acting so weird.

In five years of fatherhood, here is the one tangible lesson I can pass along: Don't take your daughter to Hooters. Or the racetrack. Or the bar. (Brooklyn, I'm talking to you.) As cool and comfortable as I want my kids to be in a wide variety of situations, there are some joints that are a little too spicy for the young'uns (if you know what I mean). Like me, you may want to be a cool and casual relaxed parent with cool, casual and relaxed kids, but how relaxed are your kids going to be when their earliest memories are strangers recoiling from them in shame and fear and annoyance? Part of what I want for my kids will come from trying to avoid weird and uncomfortable situations before they're ready. That means being a little more thoughtful about their feelings and other people's feelings. That means being thoughtful and considerate -- two things that were not a big part of my emotional vocabulary before I had children. It doesn't come naturally, but it's coming.

Spending time with your kids is one of the most important parts of being a parent. Figuring out how to act like a grown-up and still have fun during that time may be equally important. Here's what I learned: Get the fried pickles to go.