Close encounters of a tired kind 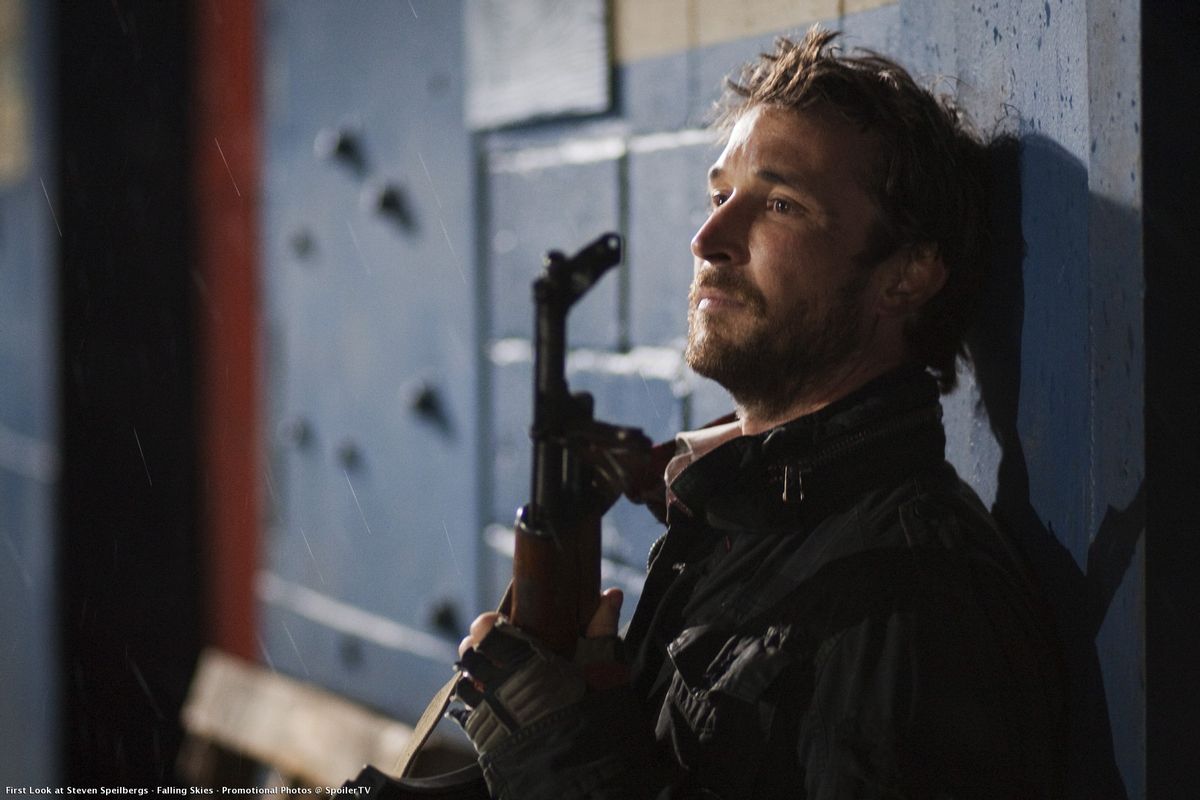 America's cities and suburbs lie in ruins. Gigantic motherships loom in the sky. Hideous extraterrestrial invaders skitter through the streets or clomp about in bio-mechanical suits of armor, blasting humans with lasers. Survivors eke out a precarious existence and strike back however they can.

I've just described some or all of "Independence Day," both versions of "V," Steven Spielberg's "War of the Worlds," and untold numbers of other alien invasion narratives. Tonight TNT contributes a new title, "Falling Skies" (Sunday, 9 pm/8 central), an eight-part miniseries from executive producer Steven Spielberg and creator Robert Rodat, who wrote Spielberg's "Saving Private Ryan." But despite its pedigree, and no matter how mightily it strives to distinguish itself from its predecessors, the result feels redundant and half-baked.

When I popped in the screener DVD of tonight's two-hour premiere, I felt a tremor of anticipation. Rather than rehash the familiar tropes of extraterrestrial arrival/invasion/occupation, "Falling Skies" starts its story six months after the creatures have arrived. We don't know what sort of monsters we're dealing with or how bleak humanity's situation is. We only know that the human race (specifically America) has had the tar kicked out of it, that all of its institutions have collapsed, and that the usual network of associations that once sustained individual lives is gone.

As opening gambits go, that's a good one, and the opening sequence of tonight's episode is a grabber: a nighttime horrorshow, with human soldiers and civilians wandering through bombed-out streets. The lucky ones manage to find hiding places. The unlucky get fried by laser bolts or abducted (or perhaps attacked; the chaotic point-of-view shots deliberately make it hard to tell) by the creatures, who suggest a fusion of the Creature from the Black Lagoon and some sort of giant crab or spider. (They're computer-generated, but their movements have the sinister, herky-jerky momentum of monsters from a Ray Harryhausen fantasy movie.)

Although I dreaded having to sit through flashbacks to the invasion and its aftermath, which I assumed would follow shortly, "Falling Skies" sticks to its guns and remains in the present. The calamitous past is a not-too-distant memory, and a hazy one. Nobody seems quite sure what happened or what the creatures are up to. We know only that they have sophisticated technology and that they use humans as slave labor by attaching grotesque biomechanical "harnesses" to their spinal columns; they look like enormous, bloodsucking centipede-leeches and -- shades of the "Alien" movies -- cannot be removed without killing the host.

The miniseries' hero, Tom Mason (Noah Wylie), is a college history professor. (Tom Hanks' character in Rodat's "Ryan" used to be a schoolteacher. Hmmmmm.) Tom had to become a soldier to protect his surviving sons, the teenage Hal (Drew Roy of "Secretariat") and the elementary school-aged Matt (Maxim Knight), and find his middle son, Ben (Connor Jessup), who was abducted by the creatures. The show is set in Boston, the script is filled with too-deliberate references to the American Revolutionary War, and the program's press materials make a big deal of the notion that Tom's knowledge of military history gives him intellectual tools that the show's more physically capable, professional soldiers lack. (The motley collection of warriors and civilians that Tom is a part is calls itself 2nd Mass, which has a very 1776 vibe.) Much of the tension in the premiere comes from Tom's clashes with Captain Weaver (veteran character actor Will Patton), a career military man who thinks protecting civilians is more a burden than an obligation. There's a lot of (rather strenuous) discussion of the longstanding military-civilian tension that links "Falling Skies" with SyFy's "Battlestar Galactica" remake. (The showrunner is Mark Verheiden, who worked on "BSG.")

On paper, there's no reason why any of this couldn't have been engrossing, or at least tolerable. Alas, "Falling Skies" isn't a tenth as inventive or gutsy as "BSG," nor is it as handsomely crafted and crudely exciting as any of the other alien invasion series I mentioned up top -- even the dumb ones. With the start of each new scene and the introduction of each new character, it becomes increasingly obvious that we aren't seeing a brazen re-imagining of a familiar, still somewhat disreputable subgenre, the alien invasion narrative, but a modest reshuffling of its elements and a slight rethinking of its cliches. Tom's wife died in the invasion, and it's only a matter of time before he gets something going with the 2nd Mass's doctor, Anne Glass (Moon Bloodgood of "Daybreak"). Anne is there mainly to bite her tongue when Weaver insults civilians and curtails her ability to do her job, and to have theoretically stimulating but actually colorless discussions with Tom about the miniseries' key themes. Tom's son Hal is the standard impetuous teenage son who wants to go off and fight the enemy even though his wise dad advises caution. And so forth.

The filmmakers must have been at least half aware that "Falling Skies" felt recycled, otherwise they wouldn't have included so many metafictional moments in which the characters describe each other and their predicaments in terms of pop culture cliche. This tendency ramps up in the second half of tonight's premiere and in next week's episode, which centers on a conflict between the 2nd Mass and a scruffier, openly racist bunch headed by a long-haired wiseass thug named John Pope (Colin Cunningham of "Stargate SG-1"). After Pope captures Tom and other members of his roving scout unit and brings them to his headquarters, he sizes them up in language that sounds as if it could have come from a network executive's script notes. "Whadda we got?" he crows, surveying his prisoners. "Papa Smurf. Sexy freedom fighter girl. Strapping young man. Black, looks like a gangbanger ... [A]n Oriental of some sort." "The 2nd Massachusetts, how Revolutionary War! So what do you got, fife and drum, tri-cornered hats?" Joss Whedon did this sort of thing brilliantly on "Buffy the Vampire Slayer." But there the self-awareness was cheeky and delightful, a way of producing TV that was aware of itself as TV yet still satisfying as a story. Here it just plays like an apology for not having come up with more interesting characters.

Too much of "Falling Skies" feels that way. It's stuck between self-awareness and naivete, between playful invention and going-through-the-motions listlessness. After a while I started zoning out and fixating on aspects that the filmmakers surely did not intend to take center stage, such as the fact that the aliens are rotten shots and seem to have no high-tech surveillance capability (the heroes evade them by ducking behind walls and crouching in ditches, as if they were Marines hiding from Japanese soldiers in a World War II picture) and that the actors are almost all thin and conventionally attractive, in that boring, commercial TV way. (The men all have smooth faces and strong jawlines, and the women all have long hair and bouncy, natural curves; they all look like they just came from the gym.) Noah Wylie seems the only recognizably real person in a sea of types. For all his unforced decency, he seems stranded here, and he rarely gets a chance to haul out the dry, reactive sense of humor that made him so appealing on "ER."

Plus, there's not enough of a sense of urgency. I mean really, shouldn't these characters be spending most of their lives hiding in sewer tunnels? Half the time they're milling about in surburban cul de sacs in broad daylight. "Falling Skies" makes life after extraterrestrial invasion look like an endless block party, but with oatmeal instead of hot dogs, and no bounce house for the kids. And it feels politically disingenuous, like yet another blandly perverse attempt to envision inhabitants of the world's dominant military power as scrappy underdogs, valiantly fighting for freedom against technologically superior foes.  Cue fife and drums.