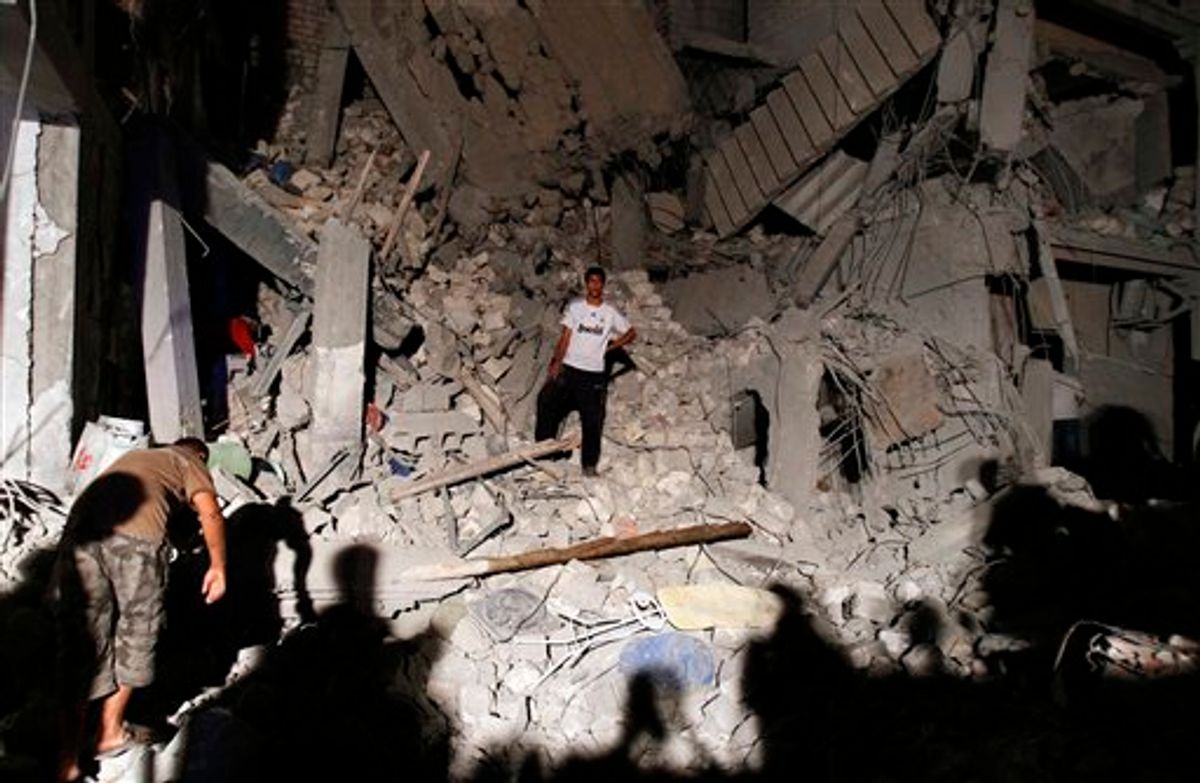 In this photo taken on a government-organized tour, Libyan man stands in debris from a damaged residential building in Tripoli's outskirts, Libya, on Sunday, June 19, 2011. The Libyan government says civilians have been killed in a NATO airstrike that has struck the residential neighborhood in Tripoli. (AP Photo/Ivan Sekretarev) (AP)
--

The incident gave supporters of Moammar Gadhafi's regime a new rallying point against the international intervention in Libya's civil war. The foreign minister called for a "global jihad" on the West in response.

Early Sunday morning, journalists based in the Libyan capital were rushed by government officials to the damaged building, which appeared to have been partly under construction. Reporters were escorted back to the site during the day, where children's toys, teacups and dust-covered mattresses could be seen amid the rubble.

In a statement issued late Sunday at Brussels headquarters, the trans-Atlantic alliance said air strikes were launched against a military missile site in Tripoli, but "it appears that one weapon did not strike the intended target and that there may have been a weapons system failure which may have caused a number of civilian casualties."

"NATO regrets the loss of innocent civilian lives and takes great care in conducting strikes against a regime determined to use violence against its own citizens," said Lt. Gen. Charles Bouchard, commander of the anti-Libya operation.

Foreign Minister Abdul-Ati al-Obeidi told reporters nine civilians, including two children, were killed in the explosion and said 18 people were wounded. He said the strike was a "deliberate attack on a civilian neighborhood," and follows other alleged targeting of nonmilitary targets such as a hotel, oxygen factory and civilian vehicles.

It has not always been possible to independently verify the government's reports of strikes on nonmilitary targets since NATO began its air operations in March.

"The deliberate bombing ... is a direct call for all free peoples of the world and for all Muslims to initiate a global jihad against the oppressive, criminal West and never to allow such criminal organizations as NATO to decide the future of other independent and sovereign nations," al-Obeidi said. He did not take questions.

Journalists were shown the bodies of at least four people said to have been killed in the strike, including the two young children. Foreign reporters in Tripoli are not allowed to travel and report freely and are almost always shadowed by government minders.

Salem Ali Garadi, 51, who said his brother and sister were among the victims, said five people were killed. There was no explanation for the discrepancy in death counts.

Before Sunday's alleged strike, Libya's Health Ministry said 856 civilians had been killed in NATO air attacks since they began in March. The figure could not be independently confirmed. Previous government tolls from individual strikes have proven to be exaggerated.

Alliance warplnes struck Tripoli again Sunday afternoon. A number of explosions could be heard in the city, and smoke could be seen rising over the southern part of the capital.

A coalition including France, Britain and the U.S. launched the first strikes against Gadhafi's forces under a U.N. resolution to protect civilians on March 19. NATO, joined by some Arab allies, assumed control of the air campaign over Libya on March 31.

While NATO warplanes have stepped up their campaign against Gadhafi's regime over the past week, fighting has intensified between rebels and government troops outside the port city of Misrata, the main rebel stronghold in western Libya.

For weeks, the rebels had been bottled up in the city, some 125 miles (200 kilometers) east of Tripoli. The eastern third of the country is under rebel control from their de facto capital, Benghazi.

On Sunday, Gadhafi's forces unleashed a heavy barrage of Grad rockets and mortars on the rebel front lines in Dafniya, about 15 miles (25 kilometers) west of Misrata. A medical official in Misrata hospital said that 10 rebels were killed and 54 wounded in clashes Sunday in Dafniya.

As the barrage continued into the afternoon, a steady stream of pickup trucks rushed casualties to a field hospital in Dafniya, where medics and volunteers quickly unloaded the dead from the back of the pickups and placed the wounded on stretchers. One truck pulled up with three bodies covered in blood.

"They are shelling us really badly today with everything -- mortars, Grads, heat-seeking weapons, anything you can imagine," said Mustafa, 30, who was helping drive the wounded from the front.

Gadhafi's forces also ambushed a group of rebels near Dafniya early Sunday with AK-47s and heavy machine guns, according to rebel fighter Mohammed Khalil. He said the fighting was intense, with the two sides as close as 50 yards (meters) from each other. Five rebels were killed in the ambush, he said.

The two sides have also been fighting in a mountain range southwest of the capital that runs to the border with Tunisia and controls a critical supply route for the rebels.

Three days of fighting there in the border town of Nalut has killed 15 people and injured many others, said Brigadier Gomaa Ibrahim, a spokesman of for the rebel military council in the Nafusa Mountains.

"The Gadhafi forces outnumber the rebels and they are better armed and equipped," he said. Gadhafi forces are also taking shelter inside the residential suburbs of Nalut, making it hard for rebels to chase and hunt them down, he said.

Despite daily clashes in places, the rebels say they control about half of the mountain range.

In new defections from Gadhafi's military, 35 army officers led by Brig. Gen. Fouad al-Adrisi announced in a video message that they had joined the rebel ranks. The video was posted on a Facebook page for the uprising.

Al-Shalchi reported from Dafniya. Associated Press writers Don Melvin in Brussels and Maggie Michael in Cairo contributed to this report.