Does Rick Perry have his own Dukakis problem?

The man who was George W. Bush's lieutenant governor may run for president. Haven't we seen this set-up before? 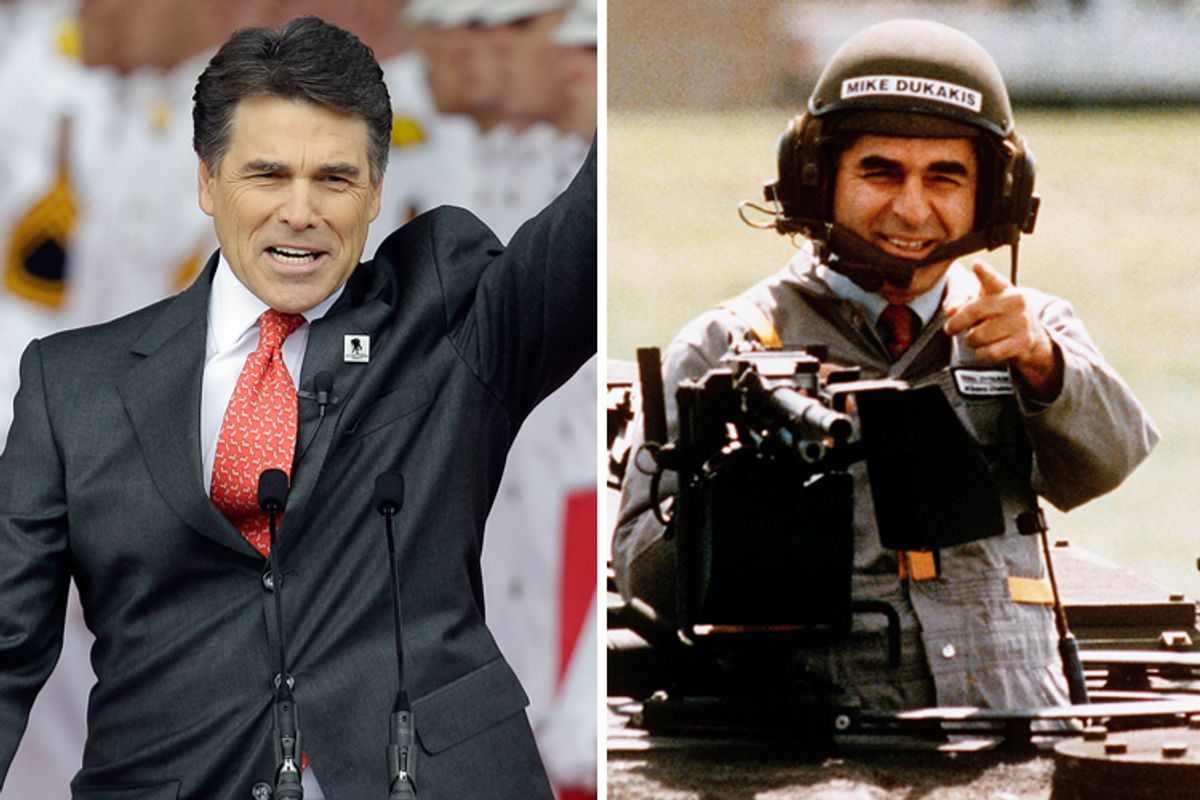 During the 2004 campaign, Republicans delighted in pointing out one particular entry on John Kerry's resume: his service as lieutenant governor of Massachusetts under Michael Dukakis.

It made for a perfect talking point. 16 years earlier, the campaign of George H.W. Bush had sold swing voters on a caricature of Dukakis as an arrogant, technocratic, and insufficiently patriotic liberal. And here was George W. Bush's campaign trying to do the exact same thing with Kerry. Sure, by '04 there were many Americans who didn't remember much, if anything, about Dukakis. But there were also plenty who did, so the Bush campaign happily played up the linkage.

For instance, when a television interviewer asserted to Bush adviser Dan Bartlett that Kerry's Senate voting record wasn't nearly as liberal as the Bush campaign had been portraying it, Bartlett replied: "Look, he's a senator from Massachusetts and the protege of Michael Dukakis. He was his lieutenant governor!"

The fun that the Republicans of 2004 had with the Kerry-Bush connection is worth keeping in mind as Texas Governor Rick Perry moves closer to a presidential run. If Perry were to win the GOP nomination, Democrats would be able to have some fun of their own, reminding Americans over and again that the GOP candidate had once been George W. Bush's lieutenant governor.

Perry held the position in 1999 and 2000, assuming the top job in the state when Bush gave it up to become president, then winning election on his own three times since then. When he initially succeeded Bush more than a decade ago, Perry made sure to note that "certainly, you are not going to see a great philosophical difference between Rick Perry and George Bush."

This raises two questions about the national campaign Perry now seems likely to wage: (1) Could a concerted effort by Democrats to link Perry to Bush, whose presidency is still viewed as a failure by most swing voters, cost Perry general election support that would otherwise go to a generic Republican candidate?; and (2) Would the possibility that it might give the GOP's opinion-shaping elites pause about supporting Perry for the nomination?

Kerry's case suggests that the answer to the first question is "no." Sure, it's hard to imagine that his service as Dukakis' No. 2 helped him at all in '04. But when you take into account the major structural factors that govern presidential elections, Kerry ended up performing just about where he should have. Moreover, to the extent that Kerry lost any voters who would have supported a generic Democrat, an endless list of factors could explain this. So while the GOP got a nice talking point out of the Dukakis link, there isn't any evidence it alone moved many -- if any -- voters.

Then again, Bush's name in '12 will be much fresher in the minds voters than Dukakis' was in '04. He was president for eight tumultuous years and left office with some of the worst approval ratings on record. A case could be made that turning around just four years later and nominating his Texas successor -- a man whose style and intellectual reputation has many similarities to Bush's -- would hurt the GOP in a way that Democrats weren't hurt with Kerry. Assuming Perry does run, it will be interesting to see if this concern takes hold among GOP elites -- either because they decide that they genuinely fear the consequences of nominating Perry, or because they dislike Perry for other reasons and see the Bush link as useful in convincing their fellow Republicans to spurn him.

Perry is plainly trying to create distance between himself and Bush. Last year, he stressed that he and his gubernatorial predecessor are "different people," said that the Bush administration in Washington had "missed some opportunities to send some good messages to the Congress that was spending too much money frankly on programs that we can't afford" and would only agree that Bush "may go down as more than a good president."

In a way, Perry has a point: He and Bush were never close in Texas, nor are they today. In some states, candidates for governor and lieutenant governor run together as a ticket, often with the gubernatorial candidate picking his or her own running-mate. But not in Texas, a state where the office of lieutenant governor is unusually strong and independent. Bush and Perry were both on the Republican ticket in 1998, but they ran separate campaigns and were elected individually -- Bush is a record-setting romp (63 percent of the vote), Perry in a squeaker over Democrat John Sharp.

But this history probably means nothing in the sound bite wars of national politics, as we learned with Kerry in '04. The Kerry-Dukakis relationship was probably better than the Bush-Perry relationship, but as anyone followed Massachusetts politics in the early '80s will attest, the idea that Kerry had been Dukakis' "protege" was laughable. They both won grueling primaries on their own in 1982 -- Dukakis in a rematch with Governor Ed King, who had ousted him in the 1978 primary; and Kerry in an upset over Evelyn Murphy, who had won the party's state convention endorsement -- and only then were they joined together. A year after taking office, Kerry essentially gave up the job when Paul Tsongas announced that he wouldn't seek a second Senate term, with Kerry winning the race to succeed him. But about all voters heard in 2004 was that they'd been soul-mates.

Besides the Kerry-Dukakis case, there really aren't many modern examples of a governor and lieutenant governor who served together both going on to run for president. As Harry Enten pointed out last week, there is the story of Jimmy Carter, the Democrats' nominee in 1976, and Lestor Maddox, who ran as the American Independent Party's candidate that same year, mainly because of his intense dislike for Carter. But it doesn't tell us much about whether Bush will be a liability for Perry.

But we do know that, if Perry does run, Democrats will try very, very hard to do to him exactly what was done to their own candidate back in 2004.