Where the gay marriage debate is headed next

New York legislators are battling it out over the state's Marriage Equality Act. Here are activists' next targets 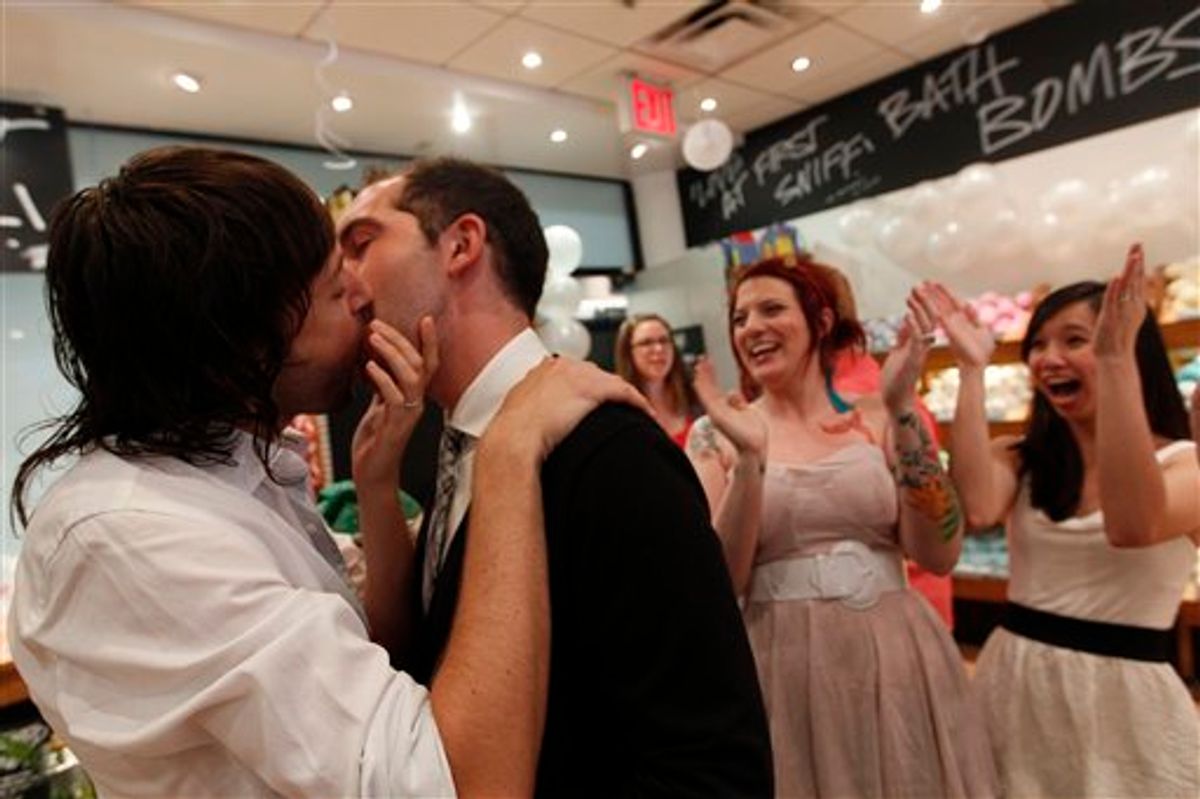 Lush Cosmetic employees Daniel Gervais, left, and David Casavant take part in a Kiss and Tell event in support of marriage equality as Amanda Halderman, second from right, and Perry Sun cheer them on, Saturday, June 18, 2011 in New York. The State Senate left the Capitol on Friday without tackling same-sex marriage and other key issues, but Gov. Andrew M. Cuomo insisted lawmakers are on track to take action before the end of the legislative session slated for Monday. (AP Photo/Mary Altaffer) (AP)
--

New York legislators' battle over gay marriage -- currently stuck in the Senate -- has been the latest such fight to capture the nation's attention. But as the extended standoff over Andrew Cuomo's Marriage Equality Act draws to a close, it's worth taking a look at the next major marriage equality battlegrounds.

When asked to name the top five states where gay marriage is likely to be up for debate in the immediate future, Sarah Warbelow -- state legislative director for the pro-gay marriage Human Rights Campaign -- put Maryland at the top of her list, followed by Maine, Oregon, Minnesota and California. (Additional states that could see serious marriage equality debates within the next five years, she said, were Illinois, Hawaii, Washington, Delaware and New Jersey -- depending on the outcome of state elections.)

Gay marriage was legal in Maine for a short period before voters reinstated a ban on same-sex unions in November 2009; like Oregon, Warbelow told Salon, Maine is now investigating the possibility of adding the issue to its 2012 ballot. (The situations in Oregon and Maine are different, however, because in Oregon the legalization of gay marriage would need to come via the repeal of a constitutional amendment.) A bill for gay marriage in Maryland was withdrawn in May after it failed to gain traction in the Maryland House of Representatives, but the issue is due to come back to the table in January of 2012.

Warbelow added that she thought the legalization of gay marriage in New York could take the national debate to a "completely different level," since the state has a cultural "meaning for most Americans" that gives its legislative decisions extra gravitas.

Marriage Equality USA's media director, Stuart Gaffney -- also a same-sex marriage supporter -- emailed us a similar list; in his organization's view, he said, future hot spots include Minnesota; Maryland and Rhode Island; New Jersey and Illinois; and California. (Maryland and Rhode Island belong in the same category because both states' legislatures have narrowly rejected marriage equality in the past year, he said; New Jersey and Illinois fall into another category because both currently allow civil unions, and could conceivably "upgrade.") Minnesota comes out on top because "marriage equality will be on the ballot in 2012" -- and polls are looking promising for gay marriage supporters.

Representatives of the National Organization for Marriage (NOM), one of the most outspoken groups against gay marriage in New York's ongoing public debate, had not responded to our request for comment at the time of publication. But Brian Brown, the organization's president, told CNN's Don Lemon this weekend that he believed "the [New York state] Legislature should not be deciding something as important as the future of marriage."

Although polls show more than half of New Yorkers currently support same-sex marriage, Brown noted that "voters directly have said no" in every state where they've been asked to choose so far. Given his opinion that voters  are likely to choose a ban on gay marriage, we can perhaps infer that he will be devoting special attention to states where legislators or courts -- rather than the people themselves -- are currently responsible for determining marriage eligibility.

Indeed, a "research brief" (pdf) on NOM's website explains why states without constitutional amendments "protecting" marriage are likely to be central to the organization's future efforts:

Since 1998, voters in thirty states have approved constitutional amendments defining marriage as the union of one man and one woman, voting to protect marriage in every state where the issue has been put on the ballot, often by large margins. And while the language of the amendments varies from state to state, the absence of a marriage amendment appears to dramatically increase the likelihood that gay marriage will be recognized.