While away the long, hot days with a metaphysical detective in New Orleans and a hypnotist in Stockholm 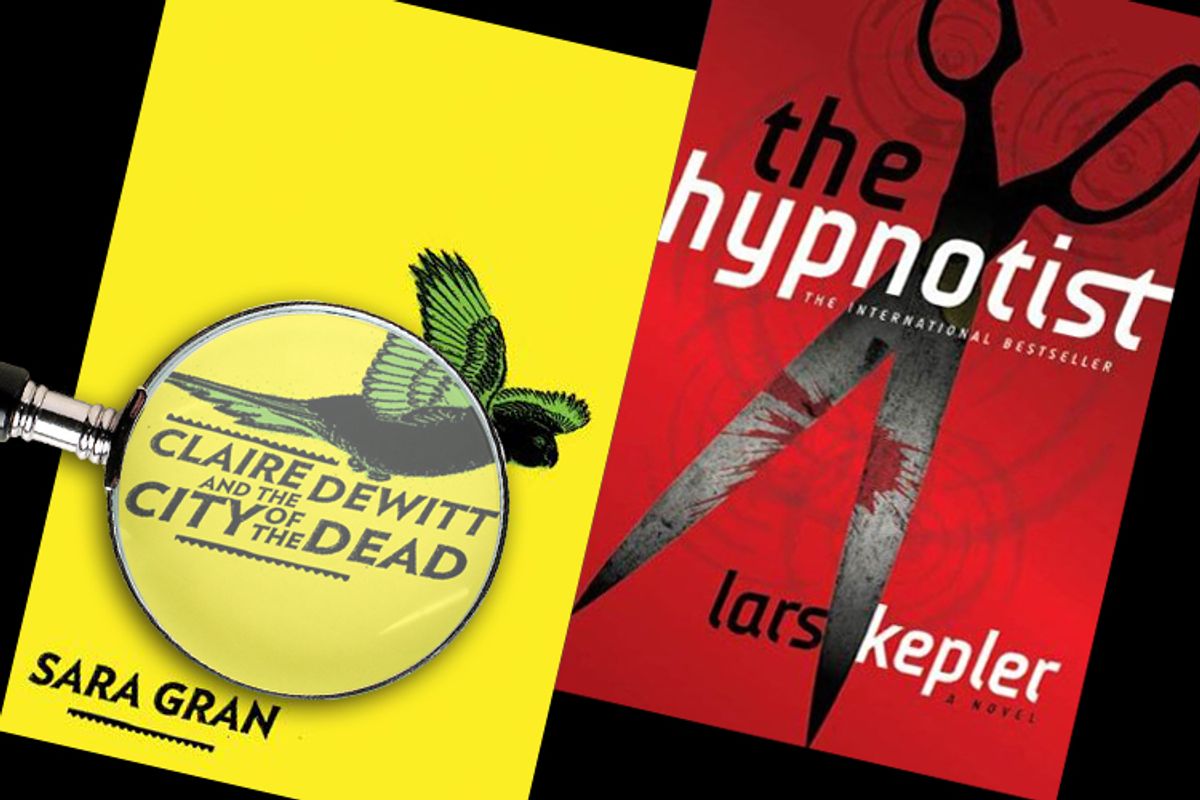 With the advent of summer, this reader's thoughts have turned to a life of crime -- well, of crime fiction, at least. It isn't always easy, though, to find a novel to scratch that estival itch. Yes, there are zillions of mysteries and thrillers published every month, but few authors offer just the right combination of distinctive prose and irresistible plotting, plus enough unorthodox touches to bump the result out of the genre's more formulaic ghettos. Tana French and Kate Atkinson do it, but they don't have a lot of company.

This year's search has yielded Sara Gran's "Claire DeWitt and the City of the Dead," said to be the first in a series about the eponymous DeWitt, a sleuth who employs an odd combination of dreams, divination (specifically the I Ching) and recreational drug use to solve mysteries. She calls them "mysteries" rather than "crimes," because her approach favors philosophy over law enforcement. Her guru is a dead Frenchman, Jacques Silette, who once wrote, "A mystery lives in the ether, it floats into our world on the wind like an umbrella and lands where gravity pulls it."

Weirdly enough, the methods Claire acquired in her study of Silette's great work, "Détection," prove quite effective. Hired to discover the fate of a New Orleans assistant district attorney who disappeared in the aftermath of Hurricane Katrina, Claire returns to the city where she served her apprenticeship, revisiting a series of contacts who regard her with profound trepidation. Claire is clearly trouble, which is perhaps understandable given that a key tenet of Silette's theory is "the client already knows the solution to his mystery. But he doesn't want to know. He doesn't hire a detective to solve his mystery. He hires a detective to prove that his mystery can't be solved."

In the course of her investigation, Claire turns up quite a few truths that nobody wants to know about, fitting given that New Orleans itself amounts to a city-size reminder of America's moral and logistical shortcomings. She also contemplates her own past (surely fodder for future DeWitt adventures) and the disappearance of a childhood friend that has dogged her from her youth. Copies of "Détection" turn up at key moments, as if operating under their own volition, to ordain select individuals as "detectives," a status, in this universe, resembling that of traveling monk. The prevailing mood, delicious and addictive, is a sort of Zen melancholia.

Less original, but nevertheless outrageously entertaining, is "The Hypnotist" by Lars Kepler. Like all Swedish thrillers, this one has been touted as methadone for readers suffering from Stieg Larsson withdrawal. Unlike the previous candidate -- Jo Nesbo's "The Snowman," which struck me as a merely adequate serial-killer yarn -- "The Hypnotist" does summon a decent facsimile of Larsson's gloomy, gruesome glitz. It has already attained bestseller status in Europe.

It must be said that there is no Swedish thriller I know of with a character to equal Lisabeth Salander, and publishers need to stop insisting that yet another glum middle-aged policeman with a foundering marriage is going to do the trick. However, "Kepler" is a pseudonym for a married couple, established Swedish literary novelists under their own names, and they bring a high degree of writerly sophistication to the task of writing a fat and shamelessly sensational crime yarn. (Those who find Larsson's colorless, methodical style intolerable may even prefer "The Hypnotist.")

Apparently, the novel's rather uninteresting police detective, Joona Linna, will be a recurring character for Kepler. Nevertheless, the hypnotist of the title, Erik Maria Bark -- glum, middle-aged and in a foundering marriage, of course -- gets the lion's share of the book's attention. Linna brings him in to hypnotize a traumatized teenage boy who is the only survivor of what appears to be a home-invasion gone wrong. Erik resists at first, having sworn off hypnotism due to a scandal in his past, the exact details of which are only gradually revealed. He relents because Linna believes another life may be at stake, only to find that he and his family have become targets of the psychopath responsible for the killings.

This is a story of crossed signals, miscalculated risks and fatal mistakes, which may irritate crime fiction fans accustomed to the superhumanly clever, resourceful and quick-thinking heroes of American-style thrillers. However, the more plausible blunderings of Kepler's characters -- their switched-off cellphones and incautious snoopings -- seem closer to the way most of us ordinary humans would behave in similar situations, and that goes a long way toward compensating for certain outlandish aspects of the plot. Of course, all Swedish thrillers are fundamentally outlandish, given that nation's low crime rate, but somehow Kepler makes you feel that if homicidal maniacs really were to start popping up in Stockholm, this is exactly how it would play out.

Such madmen remain, however, even more rare than exceptional crime fiction. Readers with recommendations to share (for books, that is, not maniacs) are encouraged to post them in the comments thread for this column. Salon's summer thriller recommendations have always been popular, and if there's enough interest I'd be happy to continue the search and post the results of further investigations in an upcoming column.