"The Killing" ends without ending

The cops on AMC's tortuous, frustrating murder mystery finally named the killer. Or did they? 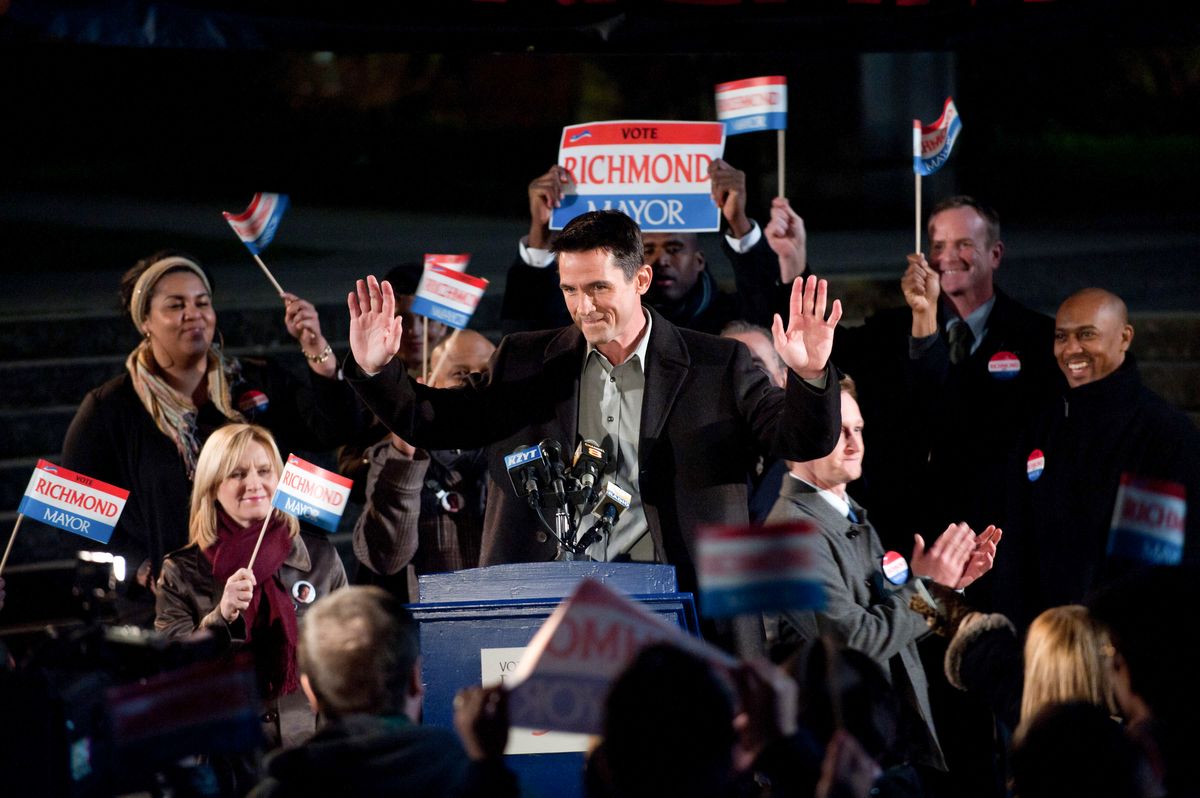 [Spoiler alert : If you did not watch the Sunday, June 19, finale of "The Killing," stop reading now.]

Of course Councilman Darren Richmond is the killer, I thought, as detective Sarah Linden arrived at a victory rally to slap the cuffs on him. How could it have been anyone else?

Besides the "Murder, She Wrote" rule that holds that the highest-paid guest star in a TV mystery nearly always ends up being ID'd as the murderer, Richmond was the only character on "The Killing" with a tragic aura, and the only one who could seem achingly sincere one minute and utterly self-serving the next. Plus: He was a politician. The psychological explanation tendered by this episode and last week's -- Richmond's womanizing and whoring were attempts to re-create aspects of his relationship with his late wife -- was just coherent and compelling enough to fly as the context for a killing, if not necessarily the trigger for coldblooded murder. You could see Richmond's compulsion leading to some sort of tragic accident, misunderstanding or sudden paroxysm of despair.  ("You notice something about Richmond's women?" detective Holder asked Linden, examining a newspaper story about the councilman's sex life. "They all got brown hair, brown eyes, white pale skin.")

But it all seemed a bit too neat, a bit too easy. And sure enough, as the Season 1 finale "Orpheus Descending" drew to a close, it became increasingly clear that "The Killing" wasn't going to give the audience closure -- that in fact it was going to take a page from "Twin Peaks" (one of the only pages, alas) and drag out the main mystery for as long as it could.

Plus there was, I realized, a corollary rule to the one from "Murder, She Wrote": The more certain Linden and Holder are that a certain person did it, the more likely their certitude will lead to tragedy. That's how Bennett Ahmed ended up in intensive care, beaten nearly to death by Stan Larsen and his surrogate son Belko Royce. And it's how Richmond ended up being targeted for assassination by Belko, who was last seen striding toward the councilman and pulling a gun from his jacket. (Belko is the most disturbing character on the show -- extremely susceptible to other people's theories, and very easily driven to lethal fury.)

Will Richmond end up dead or badly wounded? Will we ever find out who sent Holder that bridge surveillance photo that purportedly proved Richmond's guilt, but that could not have been genuine, because the surveillance cameras had been busted for months?

More important, will detectives Linden and Holder ever be held responsible for their atrociously shoddy police work, which appears to have contributed to physical harm against at least two people, and turned countless Seattle lives upside-down for no good reason? These two are just terrible -- and I think their supervisor might be even worse, because he keeps lecturing them not to go off half-cocked, then not only lets them go off half-cocked, but lets them put the full force of the Seattle P.D. behind their hunches! They're like a couple of Inspector Clouseaus behaving as if they're the heroes of a Thomas Harris novel, their incompetence backed by the full faith and credit of the FBI.

Because I am bored and disgusted with "The Killing" and not remotely looking forward to watching for another season, I won't waste precious glucose molecules proposing alternative theories or suspects. I will likewise spare you an elaborate recitation of what I think went wrong, and will instead refer you to previous columns, which chart one viewer's evolution from wide-eyed optimist to embittered crank so starkly that you could chart my declining spirits on a line graph. (Express elevator to hell, going down.)

I will close, however, by envisioning a series that might have been truly original and surprising, provided it had been executed by the right people. I humbly submit that there's nothing wrong with "The Killing" that a sense of black comedy couldn't have fixed. When you look back over the events of this past season -- with Linden and Holder repeatedly blundering into bizarre, inappropriate or dangerous situations, pursuing half-baked hunches, and generally behaving like narcissistic jackasses who think they're the brooding, righteous, intuitive cop heroes of a "Se7en"- or "Manhunter"-style  thriller -- you can envision an alternately horrifying and hilarious TV show about what happens when people let themselves get lulled into thinking that life is like the movies. A filmmaker with a flair for the perverse could have had a field day with a series like that. If Paul Verhoeven or Todd Solondz had been in control of "The Killing," we'd talk about it forever -- in a good way.