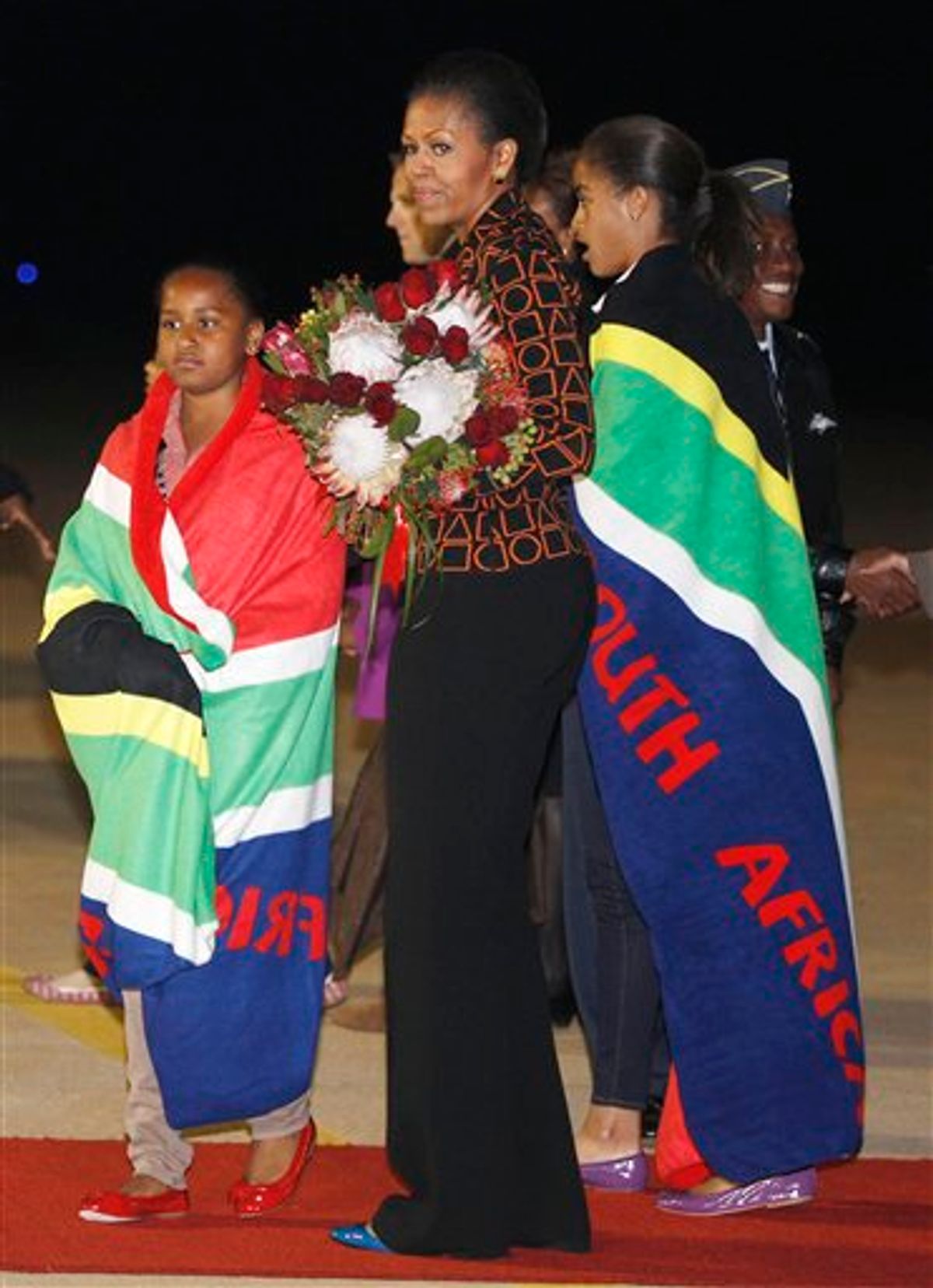 First lady Michelle Obama holds a bouquet of flowers, and daughters Malia, right, and Sasha, are draped in blankets given to them upon landing in Pretoria, en route to Johannesburg, South Africa, Monday, June 20, 2011, as they begin their week long trip to Africa. (AP Photo/Charles Dharapak, Pool) (AP)
--

First lady Michelle Obama and her family paid their respects Tuesday to Nelson Mandela during a private visit at the home of the former South African president and revered statesman.

It was the first meeting, and likely a moving one, between America's first black first lady and the political prisoner who later became his country's first elected black president.

Mrs. Obama, daughters Malia, 12, and Sasha, 10, and her mother, Marian Robinson, were being shown some of Mandela's personal papers during a stop at his foundation when, according to White House officials, he sent word from his nearby home that he wanted to meet the Obamas.

The family was then driven to Mandela's home in a well-manicured Johannesburg neighborhood, where they spent about 20 minutes with him and his wife, Graca Machel, who is a former first lady of Mozambique.

Mrs. Obama's niece and nephew, Leslie Robinson, 15, and Avery Robinson, 19, who are traveling with her, were also invited to meet Mandela.

White House officials had no immediate comment on the meeting. No aides, except for photographers for the foundation and the White House, witnessed the meeting.

Mandela, who stepped down in 1999 after serving one term as president, is rarely seen in public anymore. At age 92, he is in fragile health and was briefly hospitalized in January with an acute respiratory infection. But he apparently felt well enough Tuesday to invite the Obama family to visit.

Mrs. Obama is traveling without President Barack Obama, who met Mandela on a previous visit to Africa when he was a U.S. senator. Obama and Mandela have spoken by telephone several times since Obama took office, most recently last June, the White House said. Obama also wrote a foreword for Mandela's book, "Conversations with Myself."

Mandela spent 27 years in prison for his role in the movement against apartheid, South Africa's now-abolished system of racial separation.

Earlier Tuesday, the first lady met with Nompumelelo Ntuli-Zuma, a wife of South African President Jacob Zuma, who has three of them. She and her family were ending the day with a tour of the Apartheid Museum.