Tens of thousands of Syrians in pro-Assad rallies 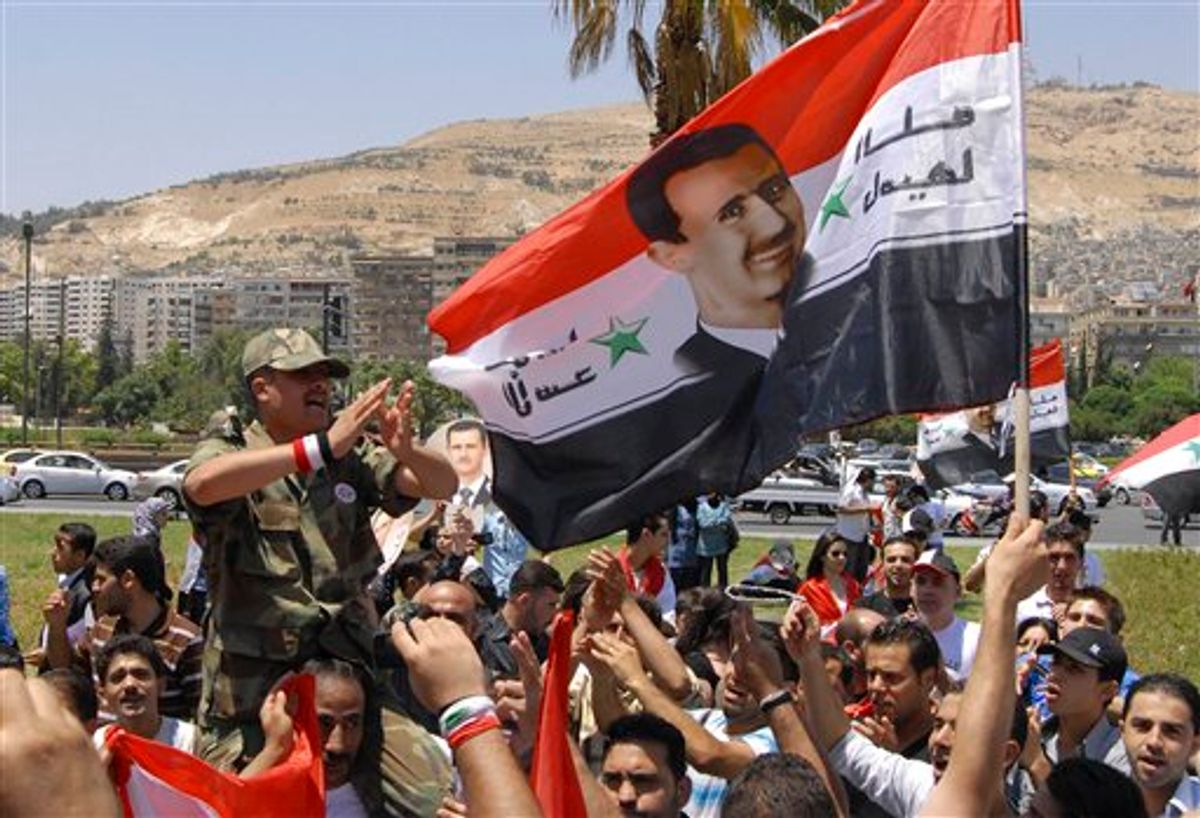 Pro-Syrian regime protesters, shout pro-Syria's President Bashar Assad slogans after he delivered a speech, in Damascus, Syria, Monday, June 20, 2011. Syria's embattled president says "saboteurs" are trying to exploit legitimate demands for reform in the country. President Bashar Assad's speech Monday was only his third public address since the country's uprising began in March. What is happening today has nothing to do with reform, it has to do with vandalism," Assad told a crowd of supporters at Damascus University. "There can be no development without stability, and no reform through vandalism. ... We have to isolate the saboteurs." (AP Photo/Muzaffar Salman) (AP)
--

Tens of thousands of people waving flags and pictures of Bashar Assad converged on Syria's main squares Tuesday, pledging allegiance to their president in the latest show of government support to counter a three-month uprising against his authoritarian rule.

The rallies came a day after a speech by President Assad offered a vague plan for reform but was rejected by the opposition, whose supporters took to the streets immediately afterward, shouting "Liar!" Assad had shown no sign of readiness to end his family's long political domination of Syria, a key opposition demand.

The largest gathering appeared to be in Damascus, but Syrian state TV showed similar demonstrations in the northern cities of Aleppo and Latakia, Hasaka in the northeast, and the southern city of Daraa.

Assad's speech -- and Tuesday's demonstrations -- showed the president clearly intends to try to ride out the wave of pro-democracy protests, showing the steely determination that has kept the Assad family in power for 40 years.

But the mobilized opposition appeared to be digging in as well, bracing for a showdown in one of the deadliest uprisings of the Arab Spring.

The opposition estimates more than 1,400 Syrians have been killed and 10,000 detained as Assad unleashed his military and security forces to crush the protest movement that erupted in March, inspired by the revolutions in Tunisia and Egypt.

Assad's speech at Damascus University on Monday was only his third public appearance since the uprising began in March. He said a national dialogue would start soon and he was forming a committee to study constitutional amendments, including one that would open the way to forming political parties other than the ruling Baath Party. He acknowledged demands for reform were legitimate, but he rehashed allegations that "saboteurs" were exploiting the movement.

The U.N. refugee agency's spokesman, Adrian Edwards, said Tuesday that 500 to 1,000 people a day have been crossing from northern Syria into Turkey since June 7 and more than 10,000 Syrian refugees are being sheltered by Turkish authorities in four border camps.

"He wants to (carry out reforms), but he has to say clearly and with determination: 'Things have changed, we are moving to a multiparty system. Whatever the people's will is, it will happen and I will bring about this transition,'" Gul said.

"As soon as he says this, I believe, he will be able to get ahead of the situation and take things under control. Maybe he is saying these things in between the lines, but he has to say them clearly," the Turkish president said.

Zeina Karam can be reached on http://twitter.com/zkaram