The man behind the glitter revolution

Nick Espinosa, who started the #glitterati trend with Gingrich, talks about his shiny protest and how far it can go 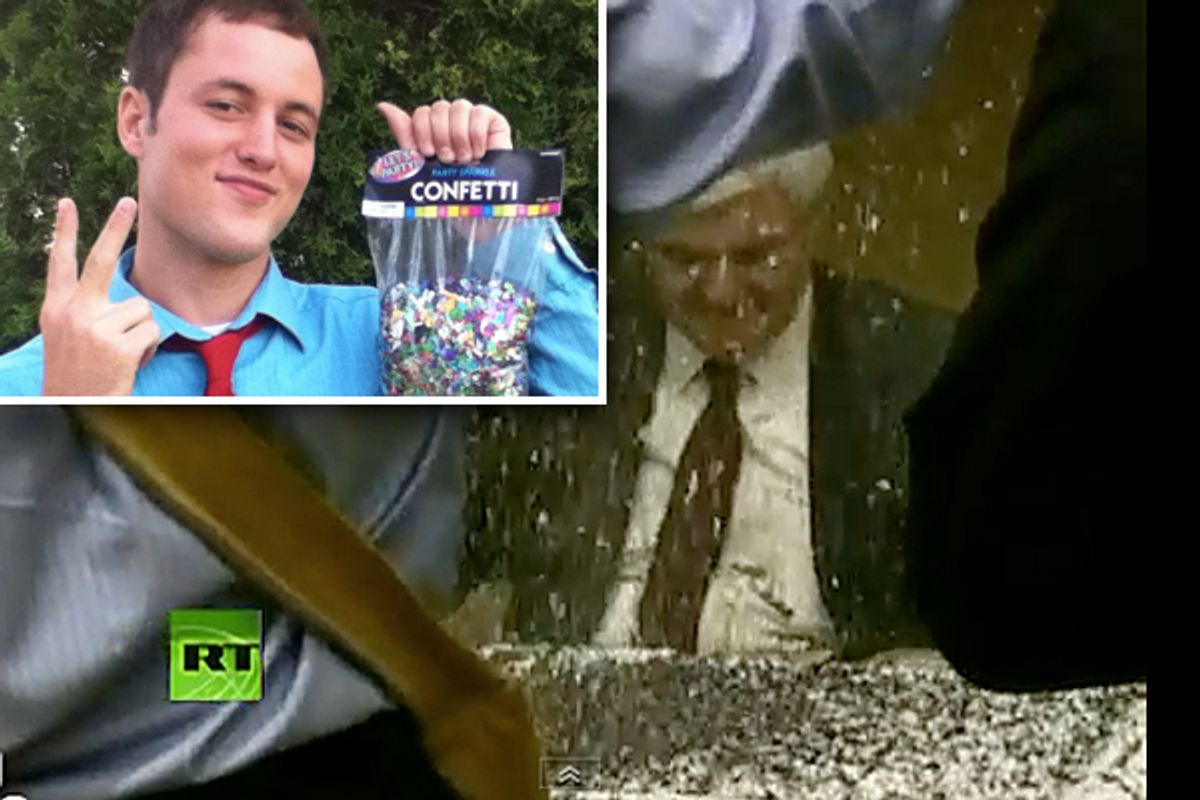 Three targets hit, viral YouTube videos and a Twitter hashtag -- glitter-bombing politicians with anti-LGBT agendas is officially a trend. Nick Espinosa, a 24-year-old activist from Minnesota, sparked the latest tactic among LGBT activists when he invited Newt Gingrich to "Feel the rainbow!" at a Minnesota family values event and showered the presidential candidate in multicolored sparkles. This was followed by a glitter attack orchestrated by women's peace group Code Pink on Tim Pawlenty. Then, on Saturday, Michele Bachmann was struck by the Glitterati (#glitterati is the hashtag for these actions now).

"It's safe, it's fun and it brings attention to big issues," Espinosa told Salon, explaining that he  finds influences in direct action groups like the Yes Men, who target big corporations and political leaders with elaborate, politically driven pranks.

"Humor can be very engaging. If it's something funny, it's fresh and it grabs you," said Espinosa, who settled on the glitter bomb as a tactic when brainstorming ways to draw attention to Gingrich's appearance with the Minnesota Family Council (which has likened gay sex to bestiality).

A number of people aren't laughing along, however. Right-wing commentators have gone so far as to describe glitter-bombing as assault and have called for arrests and, at times, violent retribution.

Ever measured, commentators on Glenn Beck's The Blaze website called the glitterati "terrorists," while Beck wrote in favor of arresting glitter-bombers:

One wonders what the reaction would be if someone doused First Lady Michelle Obama with glitter or decided to deliver a 'rainbow of pride' to Nancy Pelosi? It is safe to assume that the perpetrator would probably be hit with a Taser, wrestled to the ground, cuffed, and then hauled off to jail.

The three recent strikes against conservatives have yielded not a single arrest. Instead, the attackers usually end up on television, or in the newspaper.

Vitriol aside, some gay and queer sites have also questioned the value of the tactic. As Queerty  put it:

It’s always great to see anti-gay politicos get a figurative "pie to the face" Anita Bryant style, but how long does the resulting humiliation and the political statement really last? While glitter bomb videos might get some internet play, they also feature the protestor’s short-lived glory getting stopped by security while the protestor gets led away.

Espinosa himself referred to glittering as "silly" and told Salon that he "welcome[s] the criticism" when it concerns whether or not the tactic is effective. Indeed, he emphasized that glitter-bombs alone would not achieve LGBT equality, but that glittering seemed to be a headline-grabbing way of drawing attention to issues and pinpointing connections between anti-gay candidates and groups.

Even the glittering aimed at Michele Bachmann, which did not have the visual impact of the Gingrich and Pawlenty stunts, and seemed to almost go unnoticed by the Tea Party darling, created a media stir.

"It helps create a cultural reference point," Heather Cronk, managing director for GetEQUAL, an LGBT advocacy group that helped carry out the Bachmann glittering. Cronk explained that glitter-bombing now has "cultural capital" such that if a politician gets glittered, it serves a recognizable indication that he or she has an anti-gay agenda.

In terms of how the tactic is resonating, Espinosa said, "I don't think anyone can question the effectiveness." After he kicked off the trend,  for example, Espinosa was not involved in planning Code Pink's hit on Pawlenty.

He said that one of glittering's strengths is that anyone can pick up the tactic and use it. "Others will take the glitter into their own hands," he added.

It seems likely, then, that more glitter bombs will fly: Twitter is already abuzz with thoughts on who might be the next target (and the glitterati seem keen to add some glitter to Rick Santorum's already colorful Google presence).

And the Bachmann hit (via ABC News):