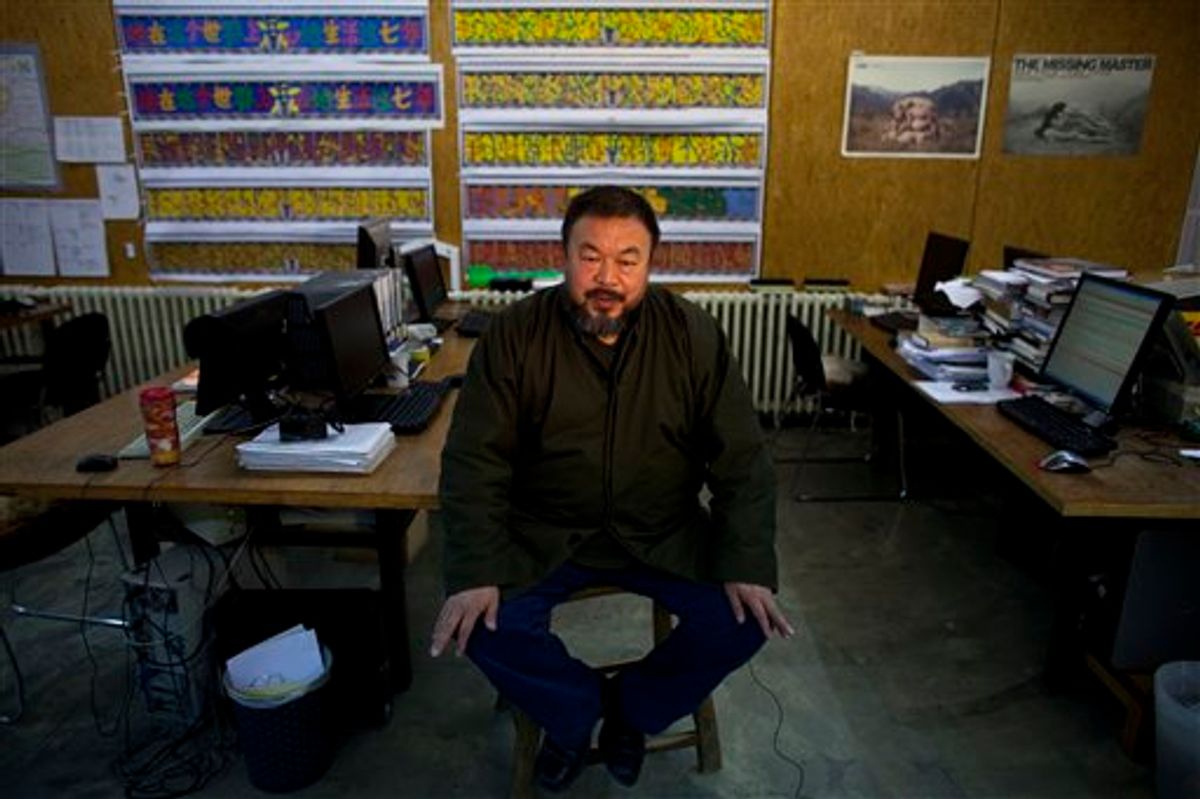 Renowned artist Ai Weiwei, among the most prominent activists detained in China's sweeping recent crackdown on dissent, was released on bail Wednesday after confessing to tax evasion, official media said.

Ai's release after nearly three months' detention was not directly confirmed by him or his immediate family. Calls to Ai's mobile phone rang unanswered, however a question sent to him by text message received a two-line reply: "Yes. Free."

The Xinhua News Agency said late Wednesday that Ai's poor health was also a factor in his release. The brief report said Ai had shown a "good attitude in confessing his crimes" and repeatedly pledged to pay taxes he owed.

Formal charges against him have never been announced, and the state media report did not mention any pending charges or trial.

Ai's sister Gao Ge, said she had not heard anything from authorities and would wait at their mother's house for further word. The mobile phone of Ai's wife, Lu Qing, who visited him in detention on May 15, was switched off. Other acquaintances were also unavailable or had no information beyond the brief Xinhua report.

Alison Klayman, an American filmmaker who has been working on a documentary about Ai, said she had no independent confirmation but was hopeful Ai had been freed.

"I'm hopeful that this is a good sign," said Klayman by telephone from the United States.

Ai's family and supporters have previously dismissed the tax evasion accusations, and Lu said the company in question is registered and belongs to her, not him. The company handles the business aspects of Ai's art career.

Ai is among China's most internationally known artists and had a hand in designing Beijing's iconic Bird's Nest Olympic stadium before souring on the event. His fame has soared in recent years, both for his groundbreaking art and his bold irreverence toward authority.

Ai's detention at Beijing's airport on April 3 made him the most famous victim of a sweeping crackdown against dissent in China that began in February when online calls for protests similar to those in the Middle East and North Africa began to circulate. Hundreds of Chinese lawyers, activists, and other intellectuals have disappeared or been questioned or detained by authorities in the clampdown.

Ai had been keeping an informal tally of the detentions on Twitter.

Ai was held under a form of detention known as residential surveillance somewhere outside Beijing. Lu, his wife, was permitted one brief, monitored meeting in which she said he seemed well cared for and was not being held in a formal jail.

Ai suffers from high blood pressure and diabetes. He told Lu during her May visit that he was taking long walks everyday, had his blood pressure checked seven times a day, and was eating and sleeping well.

Ai's detention prompted an international outcry among artists, politicians and human rights activists, and Western leaders called it a sign of China's deteriorating human rights situation. His family and supporters said he was being punished for speaking out about the Communist leadership and social problems.

Ai has also spoken critically about a number of national scandals, including the deaths of students in shoddily built schools that collapsed during the 2008 Sichuan earthquake, children killed or sickened by tainted infant formula and a deadly high-rise fire in Shanghai that killed 58 and was blamed on negligent workers and corrupt inspectors.