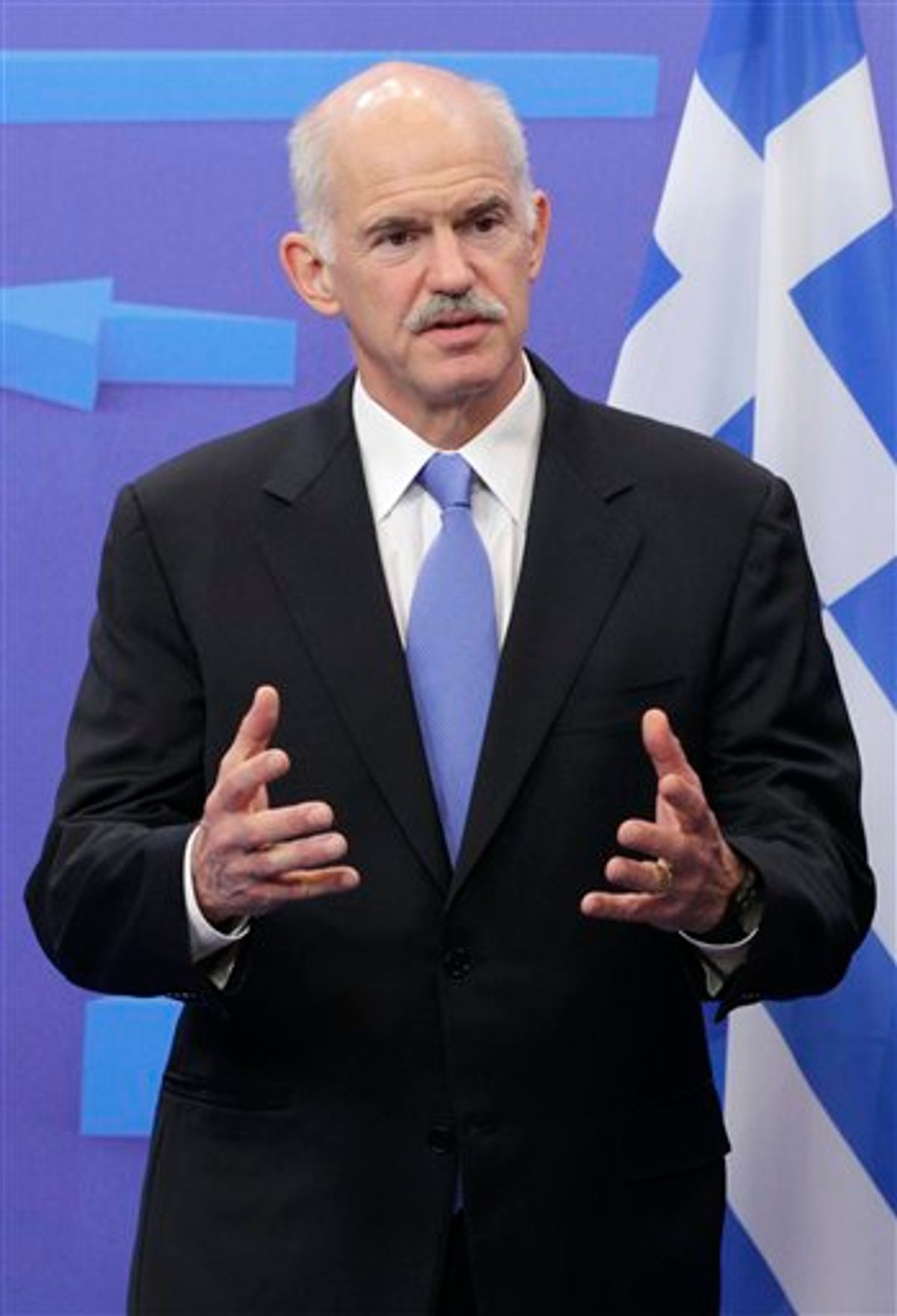 The Greek prime minister survived a crucial confidence vote early Wednesday, keeping alive a government dedicated to averting a debt default that could spark a financial maelstrom around the world.

Lawmakers voted 155 to 143 along party lines to back Prime Minister George Papandreou, who now faces a critical vote next week on a massive austerity package that Greece's international creditors have said must pass by the end of June.

He is seeking euro28 billion ($40.24 billion) in budget cuts and new taxes and euro50 billion worth of privatization of public assets. Unless the new measures pass, Greece will not receive the next batch of bailout funds, worth euro12 billion, and will face a disastrous default in July, when it runs out of money.

A default by Greece could drag down Greek and European banks and renew fears over the finances of other eurozone countries such as Portugal, Ireland and Spain.

Papandreou must still convince all the lawmakers from his Socialist party to support the austerity bill, which has provoked strikes, riots and a slump in his popularity. While all 155 Socialists voted in favor of the confidence motion, several have publicly criticized the austerity measures and at least one has said he will not back them.

After the vote, riot police fired tear gas and stun grenades to push back a group of about 200 protesters who had broken off from a main rally of several thousand to throw bottles and other objects at the police lines guarding Parliament.

"We will do everything in our power to end the state of insecurity Greek families face and exit this crisis in a safe way. We have a plan, we have prospects," Papandreou said during a debate before his victory. "Regardless of the panic caused by some, we are on an organized course, helped by the international community with massive loans -- the largest every given in the history of our planet."

Papandreou's government came to the brink of collapse last week as protesters rioted on the streets of Athens, two party rebels resigned their parliamentary seats and talks with the opposition conservatives over forming a pro-austerity coalition government fell apart. In response, he reshuffled his Cabinet, replaced his increasingly unpopular finance minister with a party heavyweight -- his main internal rival -- and called for the confidence vote.

European officials have been pressing opposition leader Antonis Samaras to back the austerity bill, which will run to 2015, two years beyond the current government's mandate. But Samaras has insisted the thinking behind it is wrong, saying it is keeping Greece in a recession. He has called for a renegotiation of the initial bailout deal.

Papandreou's losing the confidence vote would have likely led to early elections and thrown into question whether Greece could pass the new austerity measures. Expectations he would win lifted world markets earlier in the day.

After the vote, Asian stock markets rose Wednesday, including Japan's Nikkei 225 index which was up 1.8 percent at midday.

"In the short term, people have become more optimistic because the Greek crisis seems to be resolved," said Castor Pang, head of research at Core Pacific-Yamaichi in Hong Kong.

"I understand the anger, the fear, and the question whether we will make it," Papandreou said. "My answer is that we have been making it every day for the last 20 months, with difficulties and mistakes, with a price to pay and with sacrifices but we are succeeding."

Greece is being kept financially afloat by a euro110 billion ($157 billion) package of bailout loans granted by other eurozone countries and the International Monetary Fund last year, and has implemented strict austerity measures in return, cutting public sector salaries and pensions, increasing taxes and overhauling its welfare system.

But the country has struggled to meet it targets, missing many, and is now in negotiations for a second bailout, which Papandreou has said will be roughly the same size as the first.

Officials from the IMF, European Commission and European Central Bank who have been overseeing Greece's reforms were in Athens Wednesday to discuss the new austerity measures.

On Tuesday the new finance minister, Evangelos Venizelos, promised that parliament will pass the unpopular austerity package by the end of June.

"We must follow this course to save the country," Venizelos said.

"Our European partners ... face us with distrust," he said. "This is an atmosphere that we have to change."

Papandreou's popularity has been hammered by the latest austerity measures, with an opinion poll published Tuesday giving the Socialists a 20.1 percent approval rating. Rival conservatives fared marginally better, at 21 percent, in the GPO survey for private Mega television of 1,000 adults. No margin of error was given.