The government has barely a week to get new austerity measures passed by parliament to avoid a potential default. 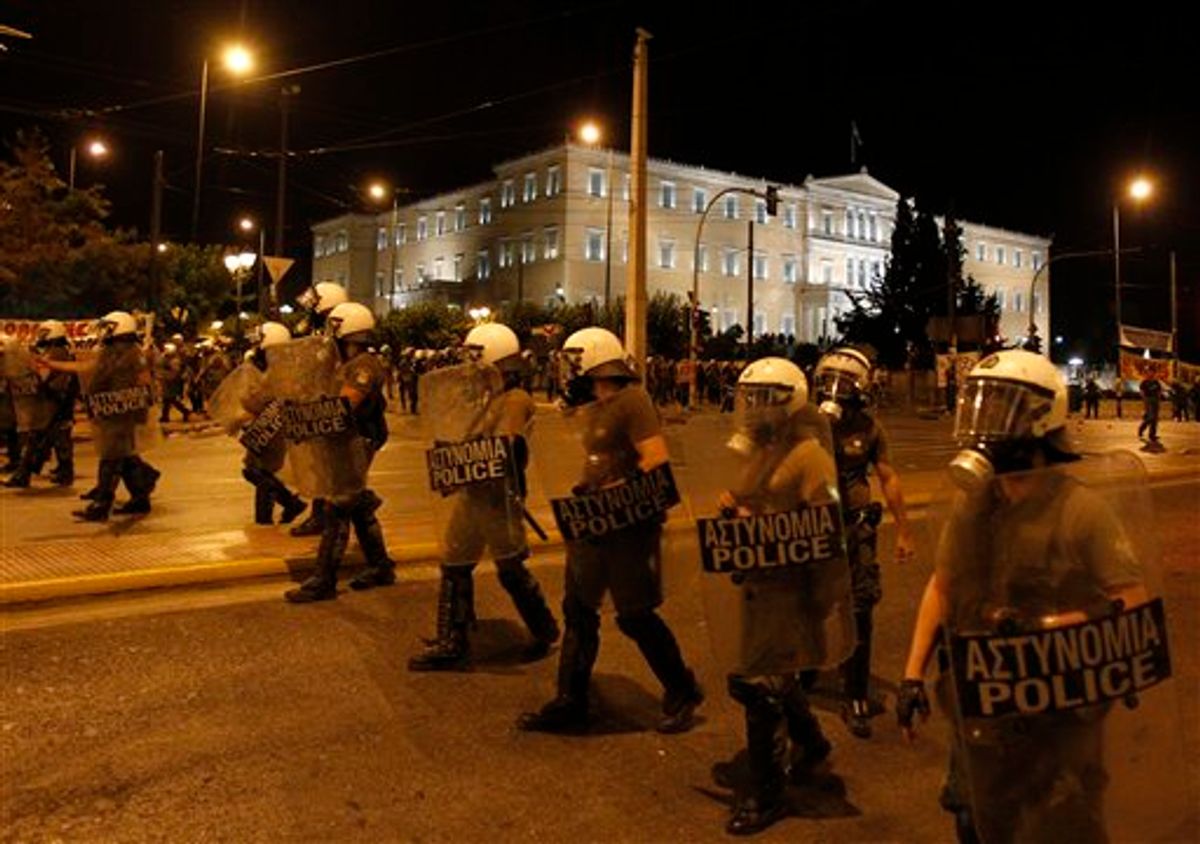 Riot police clear the street of protesters after clashes outside the Greek Parliament in Athens, early Wednesday, June 22, 2011. The Greek prime minister survived a crucial confidence vote early Wednesday, keeping alive a government dedicated to averting a debt default that could spark a financial maelstrom around the world. (AP Photo/Thanassis Stavrakis) (AP)
--

One vote down, a tougher one ahead: The Greek government survived a confidence vote Wednesday but has barely a week to get new austerity measures passed by parliament to avoid a potential default.

European leaders breathed a sigh of relief but kept up the pressure on Greek Prime Minister George Papandreou, who faces a vote June 28 to push though more spending cuts, tax hikes and asset sales. Still, fearing the financial chaos that any Greek default would ignite, EU leaders promised Papandreou additional funds to help the shrinking Greek economy to get back on its feet.

Greece's creditors, particularly its partners in the 17-country eurozone, are demanding that Papandreou get parliamentary approval for euro28 billion ($40.24 billion) in budget cuts and new taxes and for a euro50 billion ($72 billion) sell-off of government assists by the end of June. Only then will they hand over euro12 billion ($17 billion) in bailout funds that Greece needs to avoid bankruptcy in mid-July.

A default could drag down Greek and European banks, endanger the finances of other weak eurozone countries such as Portugal, Ireland and Spain, and spark financial uncertainty across world markets.

German Chancellor Angela Merkel warned that a default would have "completely uncontrollable" consequences on the financial markets, but she insisted that private creditors should voluntarily share the pain of a second Greek bailout.

The mood in financial markets was calm after the confidence vote early Wednesday, especially when compared to firestorm last week when Papandreou's government was teetering on the brink following violent protests against the new austerity measures.

Papandreou still needs to convince several of his own Socialist lawmakers to support the austerity measures. At least one deputy, Alexandros Athanasiades, said Wednesday he would vote against them due to objections about selling off state assets.

"The deal is not yet done and dusted -- one major risk to the budget may be the size of street protests between now and the vote, with potential for popular pressure to get to some of the less committed MPs (lawmakers)," said Robert Ryan, an analyst at BNP Paribas.

All 155 lawmakers from Papandreou's Socialist party voted to back their leader in the 300-seat parliament, eliminating the chance of early elections. As they voted, several thousand protesters outside Parliament chanted "Thieves! thieves!" and riot police guarded the building.

"I understand the anger, the fear, and the question whether we will make it," Papandreou said. "My answer is that we have been making it every day for the last 20 months, with difficulties and mistakes, with a price to pay and with sacrifices but we are succeeding."

Papandreou was meeting party lawmakers Wednesday to shore up support.

Greece is being kept financially afloat by a euro110 billion ($157 billion) package of bailout loans granted by other eurozone countries and the International Monetary Fund last year, and has implemented strict austerity measures in return, cutting public sector salaries and pensions, increasing taxes and overhauling its welfare system.

But the country has struggled to meet its targets, missing many, and is now in negotiations for a second bailout, which Papandreou has said will be roughly the same size as the first.

Many financial experts believe that despite his best efforts, the task is too great and Greece is heading for a default.

If Papandreou does not get the new austerity measures passed, the 17-nation eurozone would have to hold emergency talks and would come under enormous pressure to find a new solution for the debt crisis that threatens all of them.

In Berlin, German Chancellor Merkel warned that imposing a so-called haircut on Greek debt -- reducing the amount to be repaid -- would endanger banks and other creditors who hold Greek bonds, as well as institutions that sold insurance policies against a default.

"Nobody around the globe knows exactly who holds those papers, who will have to pay how much," she said.

The French government called the Greek confidence vote "a very important step" toward more European aid for Greece, while the European Commission promised to stump up some cash to kickstart the Greek economy if the austerity measures are passed.

Commission President Jose Manuel Barroso told the European Parliament on Wednesday that existing funds currently blocked should be freed to push "growth and jobs" -- a topic that could be discussed at the EU leaders summit that begins Thursday in Brussels.

"If Greece can demonstrate that is generally committed to the reform package agreed with the EU and the IMF, we will accompany Greece on its journey back to growth," Barroso said.

Of the euro20 billion ($29 billion) in development funds budgeted to help Greece catch up with the richer regions in the 27-nation EU between 2007 and 2013, only euro4.9 billion ($7 billion) has actually been paid out. The rest is still sitting unused as Greece struggles to show it can come up with matching funds.

Tensions remained on the streets of Athens, with 100 members of the powerful GENOP electricity workers union occupying the Transport Ministry on Wednesday to protest plans to privatize their company. Workers began rolling 48-hour strikes on Monday causing brief, country-wide blackouts.

"Our struggle is to protect the last big public business of the country," said union President Nikos Fotopoulos. "Electrical energy is a public good and should not be played with."

Officials from the IMF, the European Commission and European Central Bank who have been overseeing Greece's financial reforms were in Athens to discuss the new austerity measures.