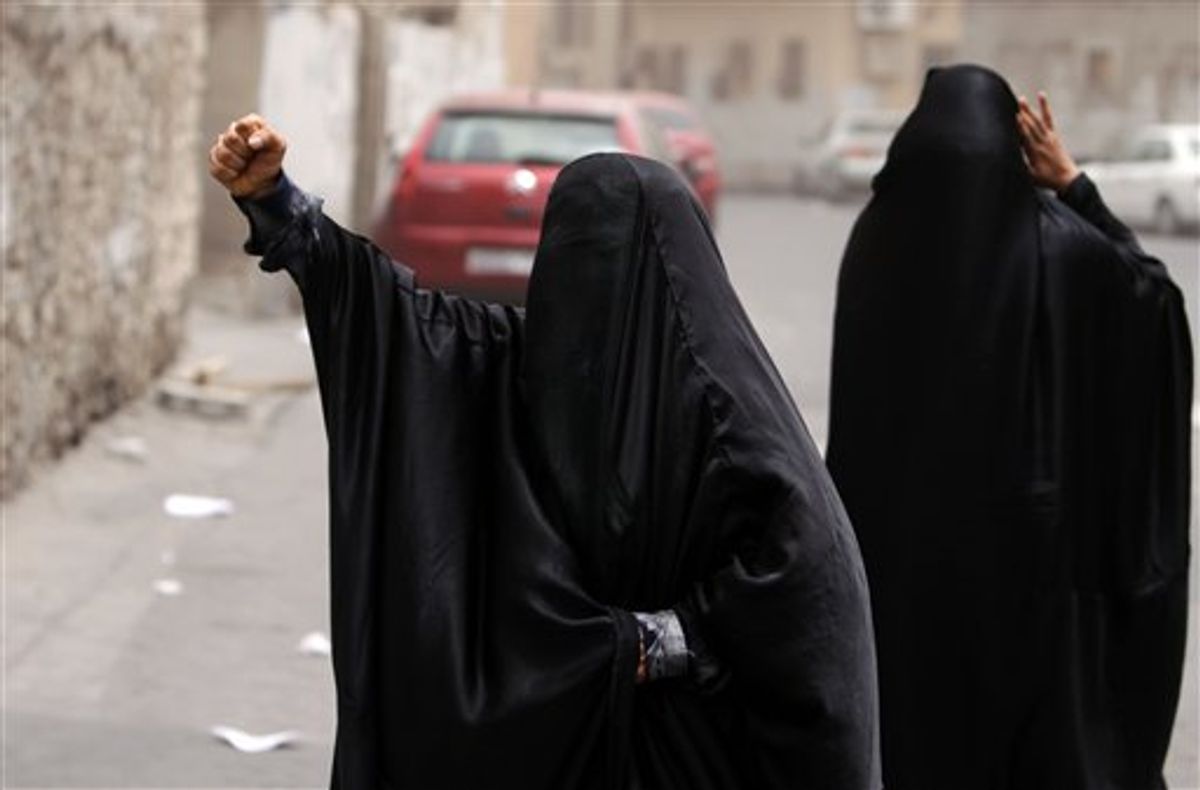 FILE - In this Friday, June 3, 2011 file photo, Bahraini women shout "God is greater" in the streets of the Shiite Muslim neighborhood of Sanabis in Manama, Bahrain, shortly after riot police dispersed anti-government protesters who began a march after the funeral of a woman they claim died of tear gas inhalation the day before. The Shiite groups that speak on behalf of protesters, who took to the streets four months ago to demand greater rights, have shown no rush to embrace the appeals for dialogue by the Sunni monarchs they accuse of creating a two-tier society in the strategic Gulf kingdom. (AP Photo/Hasan Jamali, File) (AP)
--

A court sentenced eight Shiite activists to life in prison Wednesday and issued long jail terms for 13 others in the latest blow by authorities waging a crackdown against protesters seeking greater rights in the Gulf kingdom.

Shiite crowds blocked roads with sand piles and called for protest marches -- suggesting the court decision could spark another round of unrest after months of lockdown-level security by military and police units in Bahrain, which is home to the U.S. Navy's 5th Fleet.

The sentences also could imperil U.S.-backed efforts by Bahrain's Sunni leaders to open talks next week with Shiite groups. Shiites comprise about 70 percent of Bahrain's population, but claim they face systematic discrimination such as being barred from top government and political posts.

The protests -- inspired by the wider Arab uprisings -- have claimed at least 31 lives and put U.S. officials in the difficult position of both denouncing the violence but standing by the rulers in a key military ally.

The Shiite activists were charged with trying to overthrow Bahrain's 200-year-old monarchy and of having links to "a terrorist organization abroad."

Bahrain's rulers fears that any gains by Bahrain's Shiites could open new footholds for influence by Iran, a predominantly Shiite country. Bahrain also accuses Iranian-backed Hezbollah of having a role in the protests.

Shiite leaders in Bahrain repeatedly deny any ties to Iran and accuse leaders of using the fears of Iranian string-pulling to wage crackdowns that have included hundreds of arrests and purges from jobs and universities.

Fourteen of the 21 convicted are in custody while the rest were sentenced in absentia.

The official Bahrain News Agency said those sentenced to life include prominent Shiite political figures Hassan Mushaima and Abdul Jalil al-Singace. Mushaima returned from self-exile in London earlier this year after Bahrain's leaders promised to wipe away old charges of opposing the state.

Pro-reform activist Ibrahim Sharif -- the only Sunni among the suspects -- received five years in prison while other sentences ranged from two to 15 years. The sentences can be appealed.

The special security court has presided over a series of cases linked to the protests, including issuing two death sentences against men accused of killing police officers during the demonstrations.

Next week, a trial is scheduled to resume for more than 30 doctors and nurses accused of supporting the protests. Some of the medical personnel claim they were abused while in custody.