How it went so wrong in America

In the U.S., it rose much quicker and higher than in most European nations -- and it was a self-inflicted 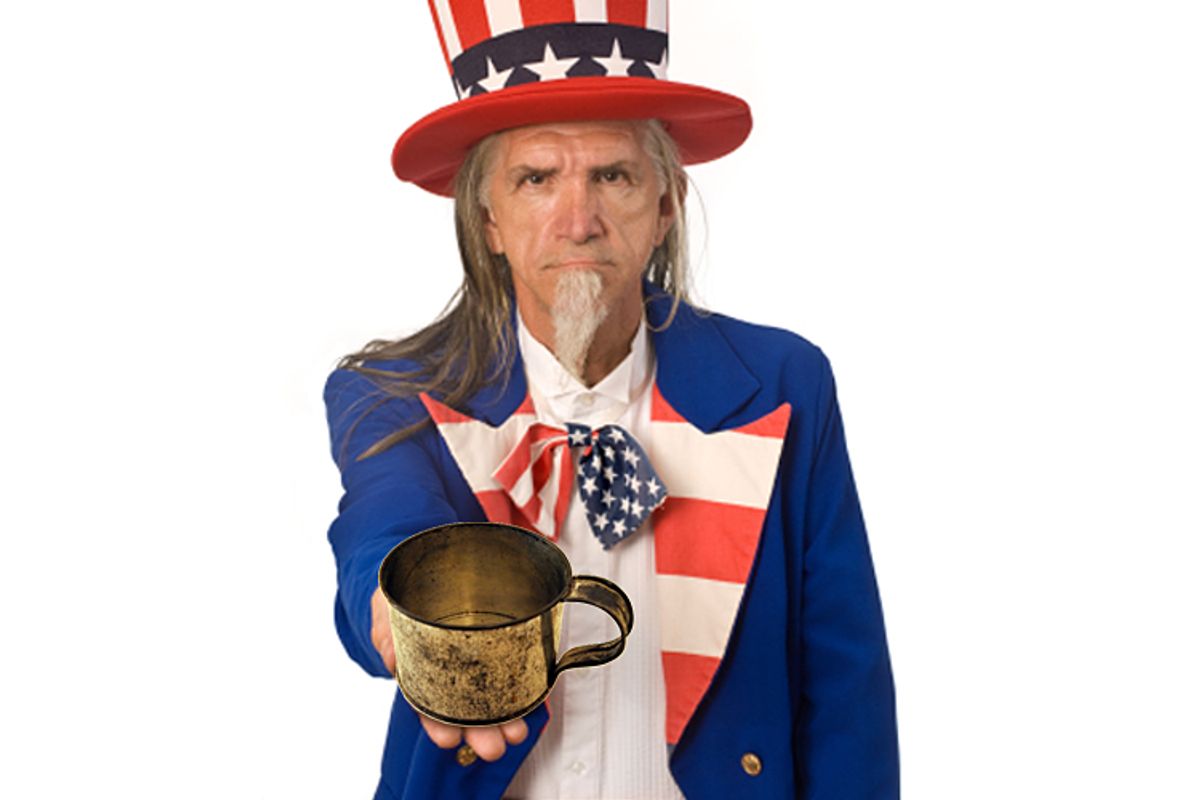 Finally, some data from the International Monetary Fund that proves, once and for all, that red-white-and-blue-bleeding patriotic conservatives are right: America truly is an exceptional nation. From 2007-2009, the percentage increase in U.S. unemployment was more than double that of most other advanced industrial nations. In a global recession, the abysmal performance of U.S. labor markets reigned supreme. The great economic blogger Felix Salmon looks at these numbers and solemnly ponders what appears to be a significant rise in "structural unemployment" -- which he deftly defines as "the level of unemployment which is baked into economic reality, before cyclical factors move it temporarily up and down." Once upon a time, workers laid off in the U.S. could expect to find new jobs relatively quickly, especially when compared to Europe, where the base unemployment rate was consistently higher and workers who lost their jobs had more trouble finding new ones. But not anymore:

And what I fear is that the Great Recession has moved the US towards European levels of structural employment, without any kind of Euro-style social safety net.

The question of whether U.S. unemployment is structural rather than cyclical is an ongoing controversial topic of debate among economists that has big implications for government policy. If most unemployment is cyclical, then government fiscal stimulus geared to boosting demand should have a big job-creating effect. If it is structural, however -- if there's a mismatch between the jobs available and the skills of workers -- then the challenge becomes much more sticky. But looking at the chart that compares the U.S. so depressingly to the likes of the U.K. and France and Portugal, another, more historically oriented question jumps out: How did we get here? Why did the U.S. do so much worse than everyone else? What makes us so special?

There's at least one easy explanation: The U.S. was the epicenter of the financial crash, so it stands to reason that the U.S. would get hit the hardest. Our housing bubble skyrocketed so high and crashed so hard that even now, almost half a decade after the first cracks started to show in the boom, the U.S. residential housing market still doesn't appear to have hit bottom. Even worse, economic historians tell us that it's always harder to recover from a recession caused by a credit crunch than from more mundane shocks -- an oil price spike, or runaway inflation, or stock market meltdown. The U.S. was ground zero for both the massive housing bust and the financial crisis. It's no wonder that we're still reeling.

But there's a deeper, more troubling factor to consider, one that gets at the heart of political and economic differences between the U.S. and Europe. The rap against Europe, from a free market point of view, has always been its "inflexible" labor markets. Strong unions and strict government rules make it relatively difficult for European employers to cut their payrolls. In the United States exactly the opposite is true -- by the 21st century, American unions had been reduced to a shadow of their former strength, and employers faced dramatically fewer limitations on their hiring and firing policies.

The reaction of American employers to the onset of the credit crisis makes this abundantly clear. From September 2008 to April 2009, the U.S. economy lost more than 4 million jobs -- an average of 500,000 a month. The demand shock delivered to the U.S. economy by so many layoffs, so quickly, was nothing short of staggering. A meteor hit the U.S. economy, and we've been living in the crater ever since.

NPR recapitulated the zeitgeist in a story last September:

Among American companies, Alcoa, the giant aluminum maker, was one of the biggest job cutters. It shed about a third of its core workforce -- 30,000 employees got pink slips.

Alcoa spokesman Kevin Lowery says the motivation was survival. "The first step was to battle through the downturn," Lowery says. "It was very, very dire times. And it wasn't that long ago."

Gary Burtless, an economist at the Brookings Institution, thinks sheer survival is one explanation for why U.S. firms cut workers more aggressively than companies in other countries.

But Burtless is skeptical, because those foreign firms experienced the same credit crisis and even greater declines in economic output than in the U.S. "But the employers did not reduce their payrolls nearly as fast or nearly as deeply as employers did in the United States," Burtless says.

Typically, defenders of free markets see flexibility as a good thing, enabling resources to flow more quickly to where they can best be made use of. And that's certainly true in many cases. The track record of U.S. flexibility has, by and large, been very impressive. But the U.S. experience suggests that too much of a "good thing" can be a very, very bad thing when a big shock hits the system. When employers lay off so many people at once, the cumulative effect catalyzes a vicious, self-perpetuating cycle that keeps an economy in deep freeze -- and potentially exacerbates the effect of the initial shock. In an eight-month period, the cumulative demand represented by 4 million Americans vanished. Not only did all those laid-off workers stop buying automobiles and new shoes and nice dinners but all their still-employed colleagues immediately pulled in their consumer horns as well, fearful that they might be next in line on the chopping block.

But in Europe, where laws, social mores, and strong unions prevented any such flexible reaction, the shock ended up substantially gentler. In Germany, restrictions on firings in combination with other labor market reforms resulted in a dramatically different outcome: Germany's unemployment rate actually fell while the U.S.'s was doubling.

The free market can be a harsh mistress. A strong social safety net, on the other hand, combined with some relative level of labor market inflexibility, seems to have cushioned the impact of the Great Recession on European workers. The millions of Americans who still remain out of work might want to think about which scenario looks more attractive, in hindsight.