Wimbledon: Another year, another grunting grumble

Why are the Brits so particularly obsessed with grunting women's tennis players, anyway? 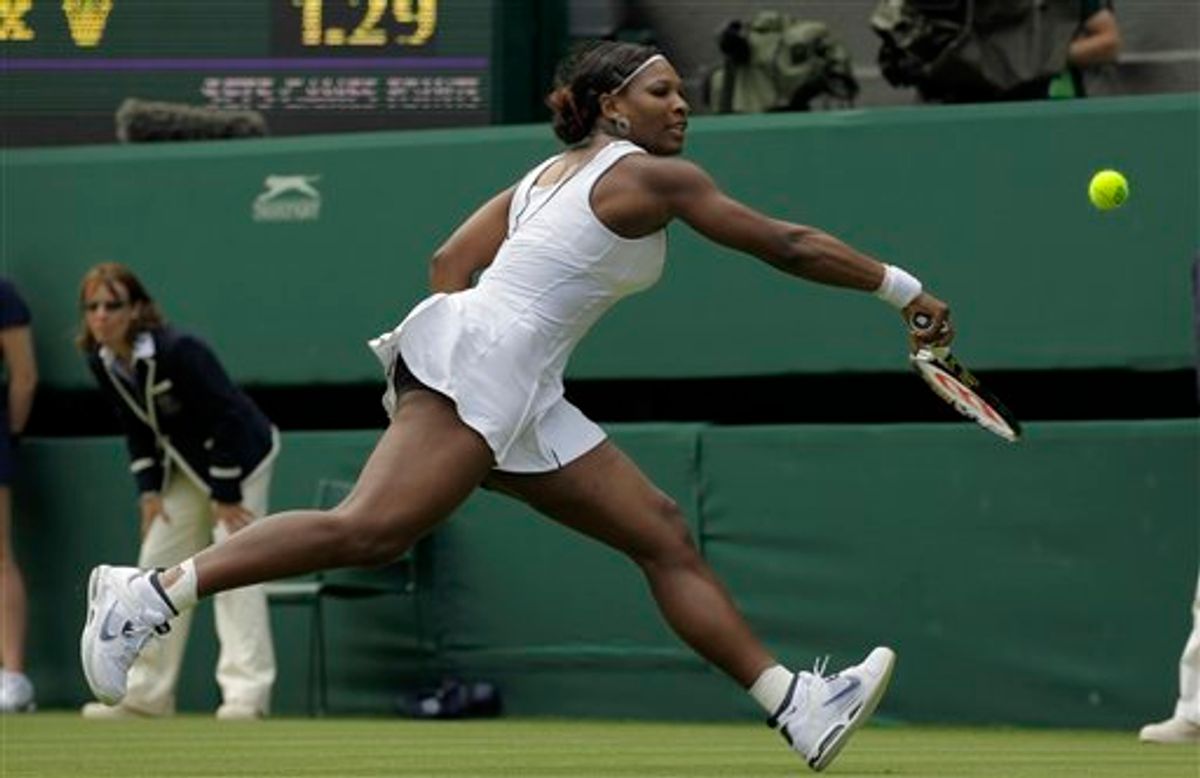 Serena Williams of the US returns a shot to France's Aravane Rezai at the All England Lawn Tennis Championships at Wimbledon, Tuesday, June 21, 2011. (AP Photo/Sang Tan) (AP)
--

Ian Ritchie, the head of England's Wimbledon tennis tournament, has told the Daily Telegraph in an interview that officials would "prefer to see less grunting" from athletes in the competition. Ritchie says he blames the grunting trend in tennis primarily on an "education problem with younger players." (It seems this year's particular problem comes in the form of Belarus' Victoria Azarenka.)

Much has been made of Ritchie's remarks today (let's face it: How often do most journalists get to use the word "grunt"?). But grunting complaints are hardly new. In fact, grunting is a pet issue for the British press, almost as much of a go-to at Wimbledon time as strawberries and cream.

Last year, a Press Association report on Maria Sharapova's loss to Serena Williams at Wimbledon declared that the Russian player "remain[ed] champion" in the "grunting stakes," emitting wails of up to 104 decibels (compared to Williams' more modest 91).

"Aircraft overhead and cheers from the crowd were at times drowned out by the pair during the pivotal first set tie-break," the piece noted. (A study published later in 2010 claimed to present "unequivocal" evidence that grunting gives players a "real advantage.")

In 2009, a Guardian article about the Women's Tour Association's stance on grunting noted that the WTA had long considered the practice a "construct of gnarled British news reporters armed with decibel-recording 'gruntometers'" -- pointing up the press' seeming fascination with the topic.

Indeed, 2009 was a banner year for grunting controversy; that summer, BBC radio commentator (and former Wimbledon men's singles victor) Michael Stich caused an uproar when he called grunting "disgusting, ugly, [and] unsexy" -- adding that he thought "sex appeal" was a large part of what female tennis players "sell."

In the same year, Martina Navratilova lashed out against on-court noisemaking ("The grunting has reached an unacceptable level. It is cheating, pure and simple. It is time for something to be done"), and the year's most notorious offender, teenage Portuguese phenomenon Michelle Larcher de Brito, hit back:

"I'm not here to be quiet for anybody. I'm here to win. If people don't like my grunting, they can always leave. ... Tennis is an individual sport and I'm an individual player. If they have to fine me, go ahead, because I'd rather be fined than lose a match because I had to stop grunting."

Before the 2009 tournament even began, the London Times had written of de Brito:

A 16-year-old Portuguese tennis player tipped as a future great, Michelle Larcher de Brito, emits a wail while hitting shots that seems to last longer than it takes the ball to reach the other side of the net. Sometimes her moans are loud enough to be heard three courts away. ...

Tennis officials are now calling foul on grunting. The problem they face is determining whether a noisy exhalation of air is natural or done on purpose to put off an opponent.

Just over a week later, it had assembled a handy Q&A on "the main issues" about grunting at Wimbledon, since the topic had proved such a persistent talking point.

A Times piece from 2005 offers further back story:

Monica Seles [first] took things to a higher pitch in the 1990s, prompting British newspapers to measure the decibels on centre court. Seles registered 93.2 decibels, enough to make Jennifer Capriati scream “shut the f*** up” across the net.

Given grunting's robust history of attention in the press, there's no reason to assume we won't be writing about it again this time next year. Until then, watch this clip for a sampling of Victoria Azarenka's trademark vocal trill, and judge for yourself: Is it distracting? Is it cheating? Is it even "grunting"?