The sci-fi vaudeville charm of "Futurama"

Inventive and shameless as ever, Matt Groening's other great cartoon series returns to Comedy Central 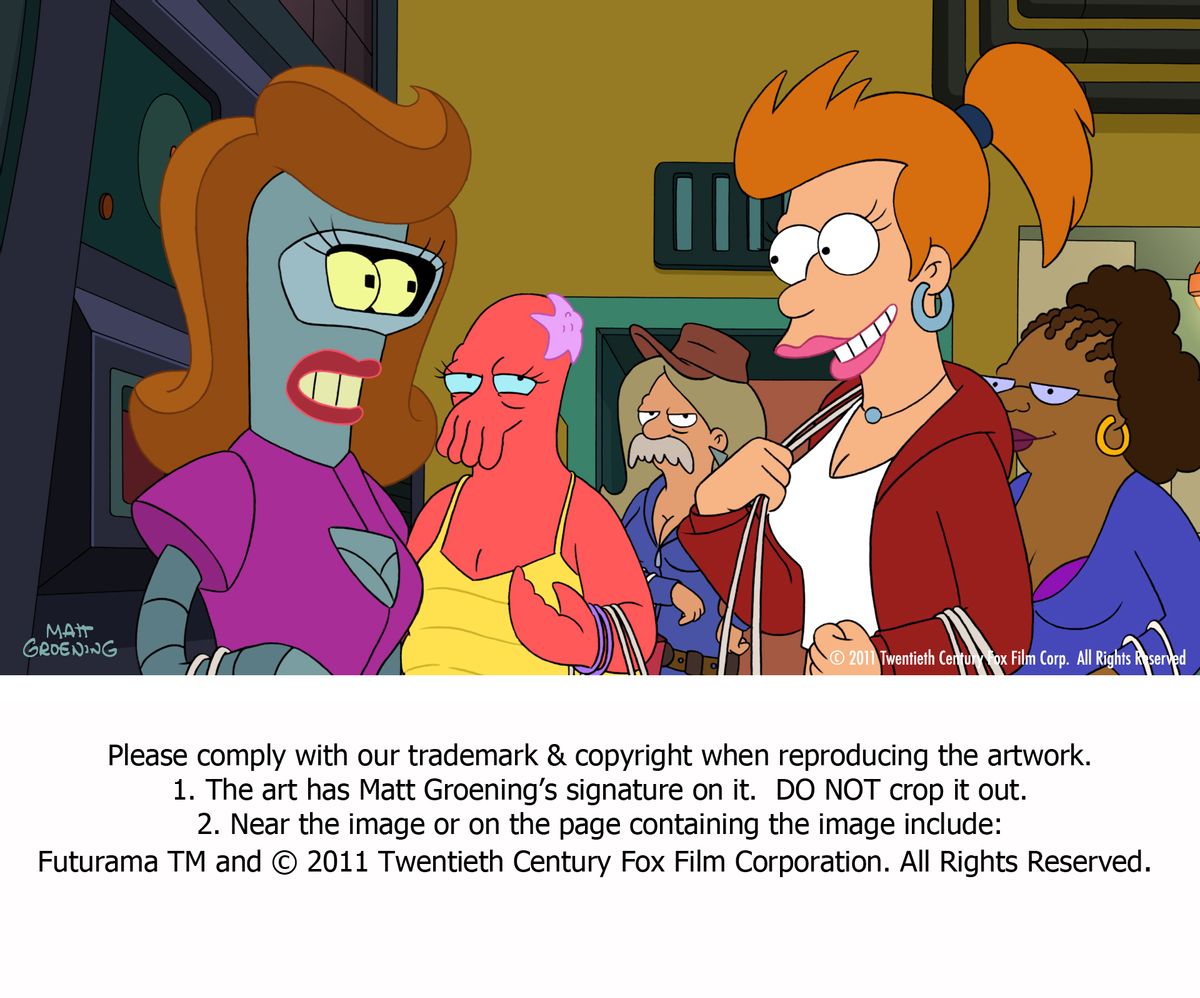 Why yes, since you asked, "Futurama" is still on. In fact, the animated series from Matt Groening and David X. Cohen is returning with another batch of new installments on Comedy Central (Thursdays 10 pm/9 central), starting with a double feature tonight. They're both strong episodes -- very much in the "Futurama" spirit of high/low, charming/crass, and designed and animated with the show's characteristic love of marginal detail and affection for sci-fi geek cliche. The show has rarely been great, but it has almost always been clever, heartfelt and arrestingly lovely. The spirit of Mad Magazine margin doodler Sergio Aragones infuses every frame. Because I live in a house with two animation-crazy kids, I've watched almost every episode twice, and have been pleasantly surprised to find that "Futurama" doesn't just hold up under repeat viewings, but reveals grace notes I missed the first time out. (It wasn't until the second or third time I saw Captain Kirk-styled space hero Zapp Brannigan that I realized, to my horror, that he wasn't wearing pants with his tunic.)

Supposedly the series is in "The Guinness Book of World Records" as the most critically acclaimed animated series (how did they determine that, I wonder, by counting up superlatives?). And yet "Futurama" never stamped itself onto the pop culture forebrain like other network cartoons; "The Simpsons," "South Park" and "Family Guy" always seemed to have more buzz even when they were in creative slumps, and right now FX's bawdy "Archer" has a lot more critical traction. Why?

Two reasons, I'm guessing. One is that for all its borderline-raunchy sight gags and Borscht Belt rimshot jokes, it has always been a mostly relaxed, gentle comedy, fully invested in low-stakes, character-driven comedy, yet confident enough to shift into a slightly different mode -- big-budget action spectacle, for instance, or poignant fable -- without seeming to strain for effect. Season 4 is especially strong; I'd rank its finest episodes -- "The Devil's Hands are Idle Playthings" and "Jurassic Bark" -- alongside the best efforts of any cartoon series. (The latter has one of the great closing scenes of any animated episode: time-traveler Fry's dog Seymour growing old and dying in front of the 20th century pizzeria where Fry used to work while the soundtrack plays Connie Francis singing "I Will Wait for You.") The other reason is that the show has always felt a bit insider-y in its humor. Where other cartoons driven by pop culture cast a wide net, "Futurama" is pitched toward sci-fi and fantasy buffs, the sorts of people who would find a non sequitur quote from the original "Star Trek" or a pun on the title of an Issac Asimov short story hilarious. The scripts overhaul the moldiest genre tropes -- interstellar invasions, time travel loops, dimension-hopping inventions -- and infuse them with such warmth and silliness that they seem fresh again. But that's admittedly not much of a selling point if you don't know and love the tropes in the first place.

Most of all, I love Fry, Leela, Professor Farnsworth, Amy Wong, Dr. Zoidberg and all the other recurring characters -- their quirks and obsessions, their bluster and sincerity. And I love how Groening, Cohen and their collaborators honor them as people by keeping them more or less consistent over time, and rarely forcing them ("Simpsons"-style) to do out-of-character things simply because the plot demands it. (The exception, of course, is the robot Bender, who is less a character than a collection of appetites, a destructive, thieving, lustful, cowardly, chiseling, boozing, cigar-smoking clown; his very existence is a joke on the sitcom's tendency to glorify obnoxious sidekicks, and to bend any character's personality to serve that week's plot.) The "Futurama" heroes and heroines always revert to type, and they do it with the myopic gusto of "Simpsons" or "Seinfeld" characters. But the writing is so sharp -- always following sci-fi tropes to their happy or bitter end, often with more patience and care than a lot of "serious" sci-fi  -- that it's still fun to watch the gang stumble along  en route to the inevitable.

Tonight's double feature is a reminder of how pleasing "Futurama" can be when it's doing what it does best: being clever, boisterous and absurd. The first episode is a slightly perverse twist on those "Star Trek" inspired episodes that stranded the crew on hostile worlds run by decadent, gambling monsters. A creature comprised entirely of boulders sizes up the group's nonstop gender-based squabbling and decides to de-sex them, then switch their genders, and bet on whether the men or the women (or the woman-men, or man-women) will survive the coming rise in planetary temperature. The moment where the rock creature explains the stakes to the gang is one of those classic "Futurama" moments that follows dire exposition with a Bob Hope-style coward-dolt one-liner by the hapless hero, Fry.

Rock creature: Tomorrow morning, this planet makes its closest pass to the sun. You will all be boiled alive like retired circus animals. Unless you somehow can cross the great alkaline planes and reach shelter in the cave of harmony.

Fry: But that sounds hard!

The follow-up episode posits a worst-case scenario: Bender is able to create a smaller version of himself, and that replica can create a smaller version of himself, and so on, until a swarm of nano-technologically tiny Bender clones begins devouring everything around it. Patton Oswalt has a priceless guest turn as an ugly giant who knows he's ugly, and who seeks revenge against the "Futurama" characters who insulted him on his homeworld by invading the earth in the most polite and passive-aggressive way imaginable, forcing Bender to...well, you should just see for yourself. Here, as in most "Futurama" episodes, the laughs come from the contrast between the show's majestically immense sci-fi vistas and the gleefully dumbass shtick that occurs in front of it. What's more ridiculous and unsettling than one Bender? Millions of Benders, swarming like surly fire ants.

Professor Farnsworth: They’ll reproduce without limit, consuming all the matter in the world!