The mystery of the Japanese "poop burger" story

Did Fox News and other media outlets get taken in by an old story about scientists turning sewage into meat? 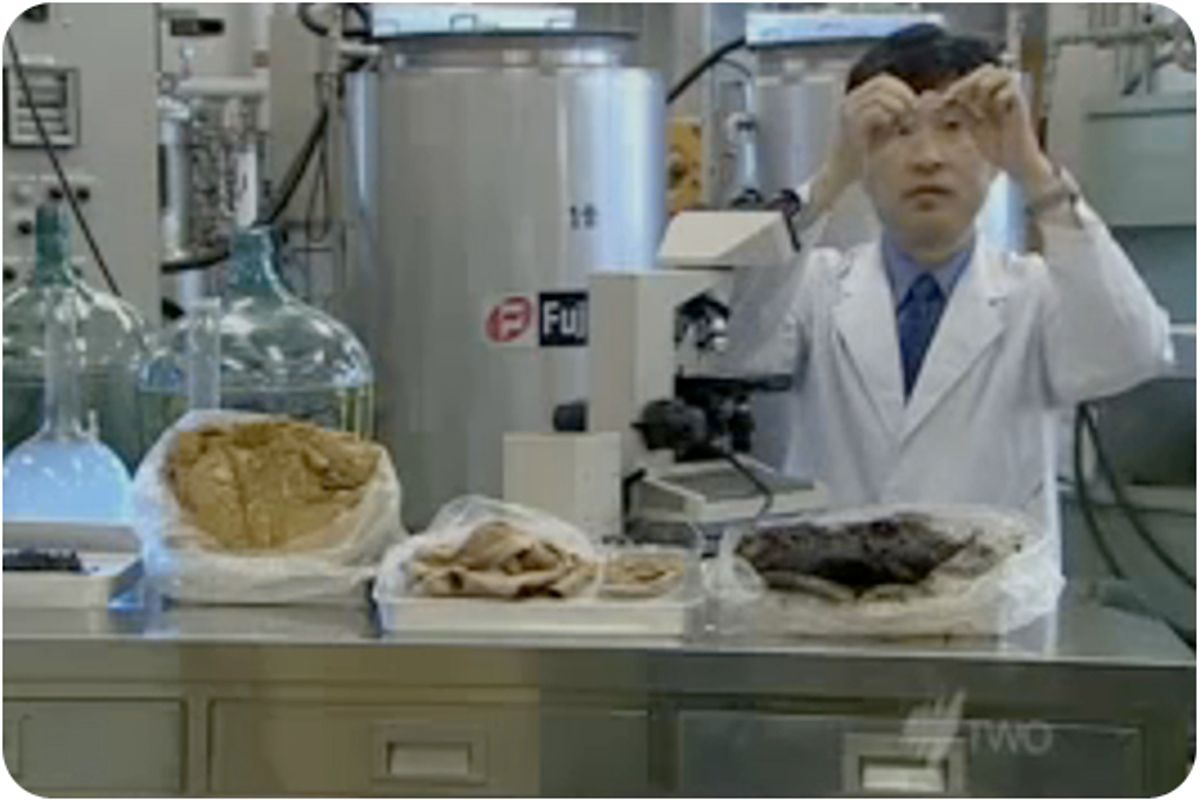 A screengrab from a video about the sewage-to-meat project.
--

Here's an object lesson in how poorly sourced -- and quite possibly dubious or dated -- information can make its way onto some big-name news websites. A few days ago FoxNews.com published a piece in its Science section with the startling headline, "Japanese Scientists Create Meat From Poop." It begins like this:

He thinks that's perfectly good protein you're sending out to sea, and he's found a way to extract it, mix it with steak sauce and create a fecal feast fit for a king.

And despite the downside of having to add soya to bind it all together, Prof Ikeda thinks there's no reason why we shouldn't all tuck into his turd burgers. ...

Prof Ikeda found the [sewage] mud was loaded with protein due to the high bacteria content. Combine it with reaction enhancer and put it in a magical machine called an "exploder" and artificial steak comes out the other end.

Intrigued, but also aware that Fox has been taken in by hoaxes before (see here), I decided to track down the origins of the poop meat story.

And as it turns out the story, which has been picked up widely around the Web and by several mainstream media outlets, is based on a mysterious news report uploaded to YouTube that no journalist seems to have checked out. And even odder: a round of nearly identical stories about Mitsuyuki Ikeda and his "poop burgers" appeared in the international press way back in 1993.

Here's how the story traveled around the Web:

Meanwhile, the story had been picked up by the LA Weekly, the International Business Times, the Village Voice, Gizmodo, and Andrew Sullivan. The New York Daily News even ran an editorial this week, "Japanese scientists have taken recycling a step too far." And the site MyHealthNewsDaily interviewed a food safety expert to explain how to safely consume the poop meat (his answer: make sure it's cooked).

So is it all a hoax? There are certainly a few eyebrow-raising moments in this video -- the fridge at around the 1:30 mark bears a label reading "Shit Burger," for example. That's led some commentators to declare it an outright fraud. There's not enough evidence to go that far. But it is clear that the news outlets involved in resurrecting this story were far too credulous in writing "news" based on a random YouTube video.

A search of the Nexis news archive shows that a set of almost identical stories appeared in the early 1990s: Scientists in Okayama City, 450 miles south of Tokyo, have managed to turn raw sewage into a protein-rich creation that resembles beef in texture and - by the time that the scientists have finished with it - also in taste and smell.

Mitsuyuki Ikeda, a member of the team, said: "We wanted to show that what comes out of the body can be recycled to go back into the body."

The product starts as a rich mud reduced from raw sewage from kitchens and lavatories. Bacteria which are harmful when alive are a rich source of protein when dead, explained Mr Ikeda. This protein is then mixed with soybean and doctored with food additives and a steak sauce.

Ikeda does seem to be a real person. I've reached out to him and some of the journalists who wrote about the story in the early 1990s; if I hear back about the origins of this story -- and whatever happened to the poop burgers -- I will update this post.