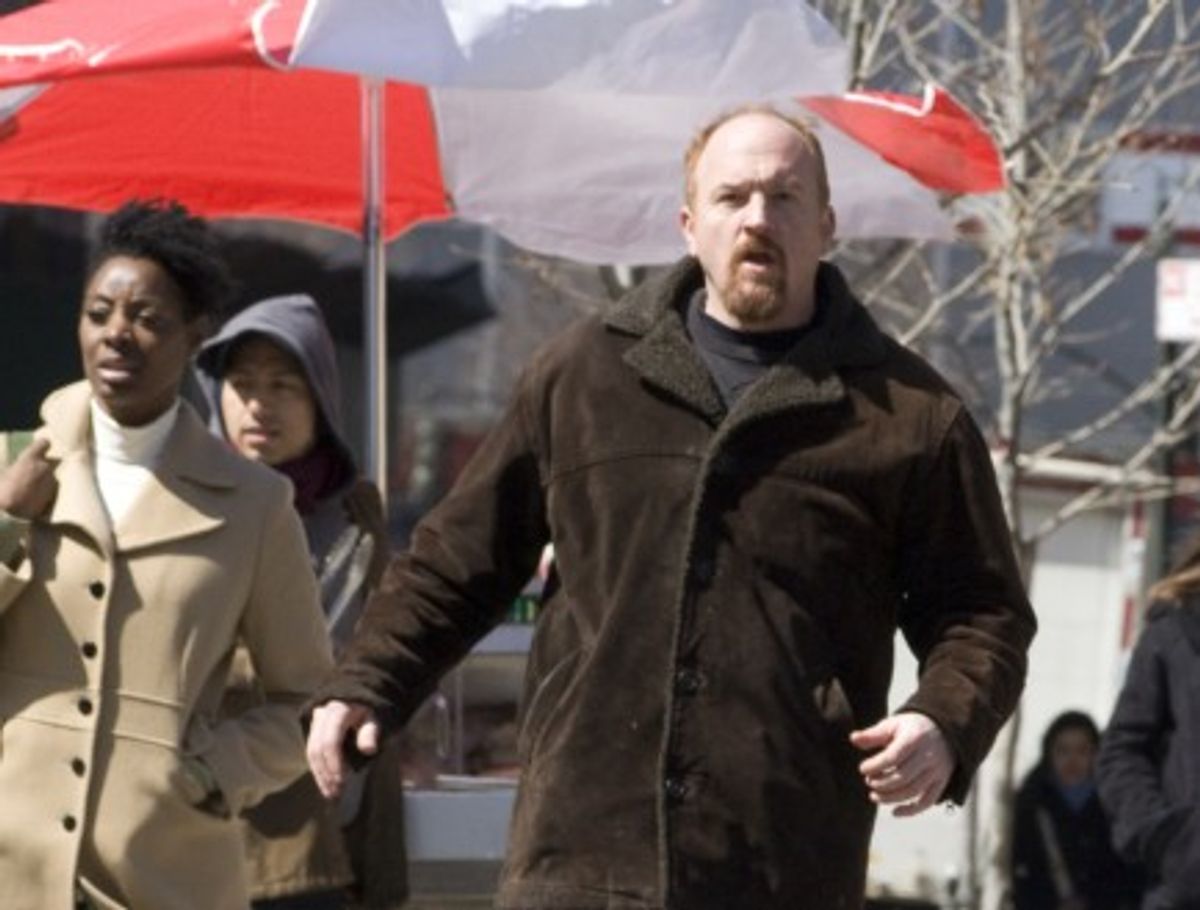 Louie (Louis C.K.) doesn't go looking for trouble, but it always finds him.
--

"Louie" does more with less than any show on TV. The FX series, which begins its second season Thursday night at 10:30, is less an ongoing story than a collection of vignettes from one man's life, shaped like short stories or anecdotes. Creator-star-writer-director-editor Louis C.K. starts  each episode "Seinfeld"-style, telling jokes in front of a brick wall at a comedy club. Louie's life as a divorced dad provides the show with observational humor galore, especially in the stand-up sequences. But the series bears very little relation to the typical comedian-driven sitcom. "Louie" is more interested in the minute details of people interacting with each other, misunderstanding each other, and learning without necessarily growing.

The profanity and sexual imagery can be blunt, often unrelentingly so, and their juxtaposition with laid-back, almost Bill Cosby-like domestic scenes is as ungainly as it is fresh. But for all its contradictions and moments of shock-for-shock's sake, "Louie" has a gentle heart, and it probably gets closer to documentary-style independent filmmaking than any half-hour series ever. "Curb your Enthusiasm" is visually just as loose and spontaneous, maybe more so; but it's a plot-driven show, tightly structured and driven by wacky or abrasive high jinks. "Louie" is subtler and more relaxed. Parts of it don't even try to be funny; they just observe Louie floundering in the morass of daily life, trying to be as honest as he can without alienating his friends, family and audience, and seesawing between decency and selfishness, stupidity and wisdom.

Tonight's season premiere starts with a long close-up of Louie overseeing his youngest daughter's bedtime routine. As she's brushing her teeth, she casually and innocently drops one of those bombshell statements that can make parents feel as though they just got kicked in the gut. "I like Mom's [house] better," she says. "because she makes good food. And I love her more, so I like being there more." Louie does a heroic job of keeping his angst under wraps: "OK ... OK ... That's nice, honey." "I love it here, too," she finally adds. "Let's rinse and spit, all right?" he says. She leaves the room. As soon as her back is turned, he flips her the bird.

I laughed. I've done that to both my kids when they were that age. I'm not proud of it, but I've done it.

Then the episode takes a sharp left turn into intense psychodrama.  Louie's massively pregnant sister, Gretchen (Rusty Schwimmer), has a medical emergency while staying at Louie's house while his daughters are sleeping over. He can't deal with the situation without trusting a couple of strangers who live down the hall; Louie's inability to trust them is disturbing to both him and us. It's a short bit of comic business -- maybe seven or eight minutes, total -- but it says more about the anonymity of modern city life and the self-centered isolation it induces than any dark drama I've seen recently. The payoff is at once revolting, awkward and oddly powerful, not a combination you see very often.

Next week's episode is really two mini-episodes, both revolving around disastrous dates. In the first, Louie witnesses a horrendous act of random violence and instantly discovers a tough, confident, authentic voice he never knew he had, and carries it onto the date with him. His elation at discovering a tougher, rawer, more honest Louie eclipses the more important question: If you continue on with a date after witnessing something like that, how mentally healthy are you, really?

The second vignette finds Louie confronted with a situation that's supposedly a single man's ideal: a reasonably attractive woman who just wants to have sex and isn't remotely interested in a relationship invites him to her place. The setup is awkward and unsettling to start with, but it builds beautifully, and it kicks into a different, more fascinating gear when Louie's date starts making him more and more uncomfortable and he still doesn't leave. Why doesn't he just go home? Is it because men are so sexually insatiable that they'll endure any amount of discomfort if they think they'll get laid eventually? Or is it because he thinks he's supposed to want sex that badly -- and that if he doesn't tough it out it means there's something wrong with him, that he's somehow unmanly? The climax, as it were, is a reminder that we take our phobias and manias to bed with us, and that no matter how comfortable we are with them, they're bound to freak other people out.

Louis C.K. can be a surprisingly deep actor, not because of his technique -- he doesn't really have any -- but because he's so unaffected. He doesn't put any barriers between himself and the viewer. When he's in close-up, listening and reacting to other people, you feel as though you can read his thoughts. And you can.