The president's announcement gets some approval abroad, but appeases neither war critics nor hawks at home 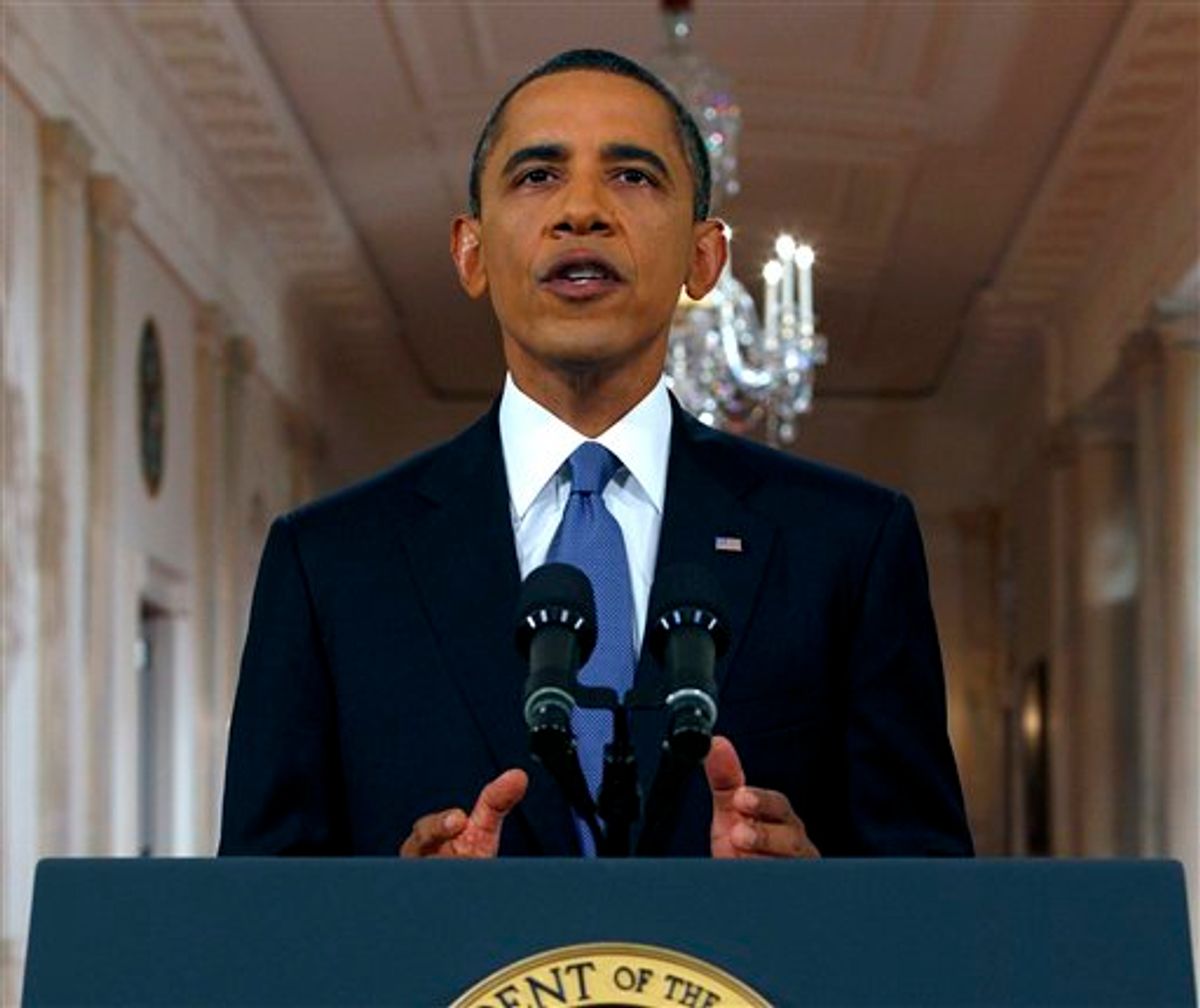 President Barack Obama's announcement Wednesday night that he has ordered the withdrawal of 33,000 military personnel from Afghanistan by the end of the summer of 2012 has already triggered a firestorm of reactions both from his GOP opponents and his own party. His compromise on the drawdown, it seems, has not appeased war critics or hawks.

What he said: The crux of Obama's speech was that what needed to be achieved in Afghanistan by the war has been achieved: The "tide of war is receding," he announced. As the New York Times notes, however, some analysts believe that the withdrawal plan in fact indicates that "the administration may have concluded it can no longer achieve its loftiest ambitions there."

Just over one third of the 100,000 U.S. troops stationed in Afghanistan will be brought back within 15 months (some 10,000 will leave this year with another 23,000 returnng just in time for the election). The draw-down, which will take a number of years, is still more rapid than his military commanders have advised (General David Petraeus, just named CIA chief, and Defense Secretary Robert Gates, have both publicy endorsed slow withdrawals. Obama mentioned neither Gates nor Petraeus in his speech).

GOP Response: (via Huffington Post) Some of Republican leaders have criticized Obama with reference to the advice of these military commanders. "This is not the 'modest' withdrawal that I and others had hoped for and advocated," John McCain said, while the Republican Senate leader Mitch McConnell declared that "the drawdown of forces described by the president needs to be conducted in a manner that respects the professional judgment of our military commanders, preserves the security gains of the last year and allows for a slower pace of withdrawal if necessary."

A number of GOP presidential hopefuls towed this line too: Mitt Romney said, "This decision should not be based on politics or economics... I look forward to hearing the testimony of our military commanders in the days ahead"; Herman Cain responded, "Sadly, I fear President Obama's decision could embolden our enemy and endanger our troops."

Some GOP candidates argued against Obama's plan using similar reasoning, but with rhetoric steeped in American exceptionalism: "President Obama speaks of winding down our engagement in Afghanistan, but he does not emphasize the need for victory," said Sen. Rick Santorum, while Tim Pawlenty said (and then tweeted), "When America goes to war, America needs to win."

And then, the members of the growing cadre of Republicans pushing for an even faster troop withdrawal spoke out too: Former New Mexico Gov. Gary Johnson said, "reducing troop numbers to pre-surge levels, and taking a year to do it, is not acceptable to the growing number of Americans, like me, who get the reality that there is no compelling reason to risk another life or another dollar in a conflict that has no end"; and, unsurprisingly, libertarian Rep. Ron Paul's 2012 campaign chairman commented, "This move is too little, too late."

(Our own Andrew Leonard, riffing on the argument for swift withdrawal based on spending, points out that we cannot afford to stay at war, but that the withdrawal plan will barely touch the deficit: Thirty-three thousand troops by next summer adds up to around $15 billion [in savings] -- or about 1 percent of the U.S.'s $1.5 trillion deficit. This peace dividend isn't going to result in a budget surplus any time soon.")

Democratic response: Democratic House leader Nancy Pelosi expressed the views of many in her party, saying "It has been the hope of many in Congress and across the country that the full drawdown of US forces would happen sooner than the president laid out, and we will continue to press for a better outcome." Senator Barbara Boxer, agreed, noting: "I am glad this war is ending, but it's ending at far too slow a pace."

International response: Afghan President, Hamid Karzai, called the drawdown "a good measure," Politico reports. He admitted the Afghan security would in turn need to be strengthened. A representative from the Taliban also responded to Obama's speech with a rare English statement. "Our armed struggle will increase from day to day," he said.

According to the Guardian, British prime minister David Cameron "welcomed" Obama's plan and commented "I have already said there will be no UK troops in combat roles in Afghanistan by 2015 and, where conditions on the ground allow, it is right that we bring troops home sooner." France's Nicolas Sarkozy announced too that France would follow the United States with a gradual draw-down of the 4,000 French troops stationed in Afghanistan. German Foreign Minister, Guido Westerwelle, said his country plans to start to reduce its contingent of 5,000 armed forces by the end of this year.