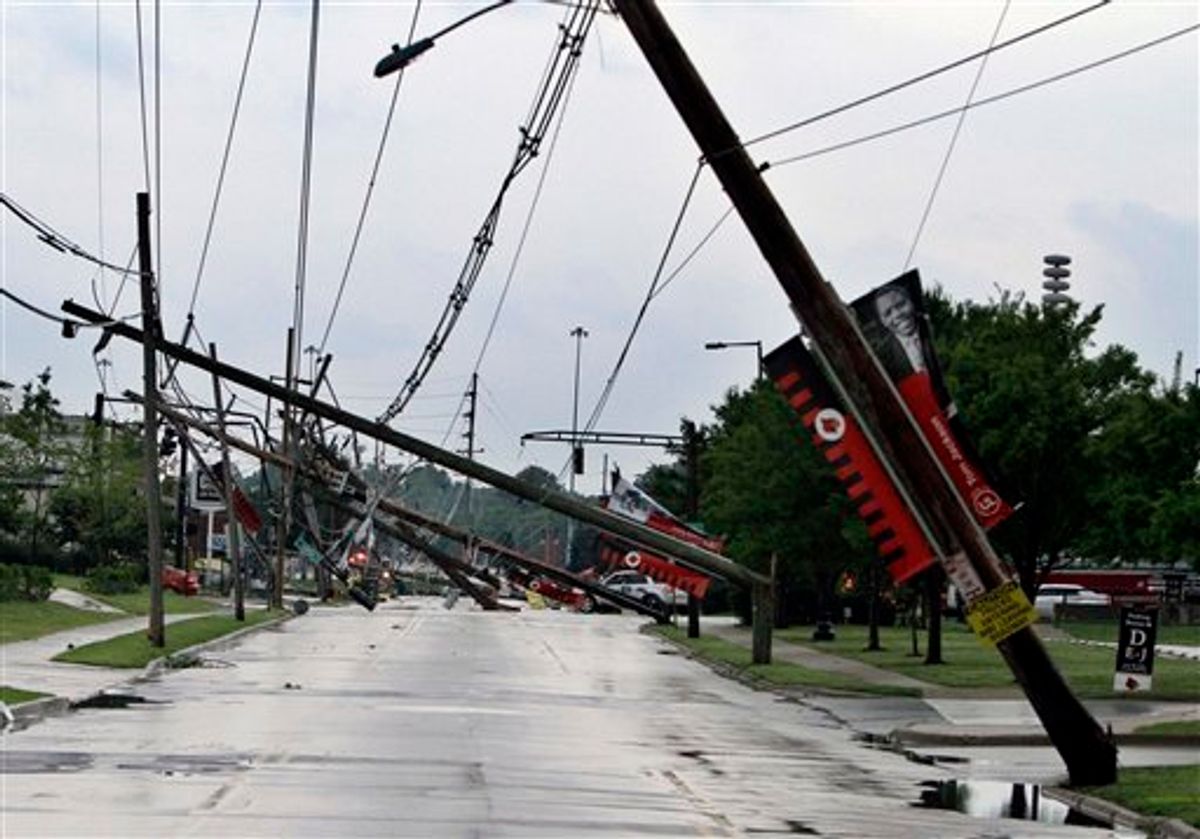 A row of electric power poles snapped along Floyd Street at Central Avenue in front of Cardinal Stadium at the University of Louisville in Louisville, Ky., Wednesday, June 22, 2011 after an apparent tornado moved through the area. At least five barns were damaged and horses were running loose Wednesday at Churchill Downs, home of the Kentucky Derby, after a powerful storm that spawned tornadoes blew through Louisville. (AP Photo/Garry Jones) (AP)
--

Churchill Downs workers scrambled to corral horses driven from their collapsing barns when a possible tornado hit the famed Kentucky Derby horse track and officials must to decide when races can resume after several buildings including the chapel were damaged.

The National Weather Service has not confirmed that a tornado it was tracking on radar did the damage Wednesday night or whether it was gusting straight-line winds.

But eyewitnesses playing in a Texas Hold 'em poker tournament at the track said they saw the rotation in the clouds and then saw swirling winds touch down along the backstretch and skip diagonally through the barn area, Churchill Downs spokesman John Asher said.

"Clearly in their eyes it was a tornado," he said.

No races are run on Wednesdays this time of year. But besides the poker tournament, people were watching a simulcast of races from other tracks and some workers live in apartments above the damaged barns. Still, officials had no reports of injuries to humans or horses. Some minor injuries were reported elsewhere in Louisville that was inundated by torrential rains that caused flash flooding.

At least nine of the track's 48 backside barns were damaged, as was the chapel. The damage displaced about 200 horses and one barn was flooded by a water main break. The powerful winds also damaged living quarters for about 100 people and arrangements were being made to provide them temporary shelter.

"It's a hell of a mess back here," Asher said of the barn area where the damage was concentrated.

Thursday's racing card, training and simulcast wagering operations were canceled. The track has nine live racing days left in its spring meet that runs until July 4. Officials did not say when it would resume.

Horses were moved to safe areas and the track was arranging to possibly take about 150 horses to the nearby state fairgrounds. Keeneland Racetrack in Lexington also offered stall space if needed, Asher said.

Much of the track was spared, including the iconic twin spires above the clubhouse overlooking the finish line that were apparently not damaged, track President Kevin Flanery said.

Security guards told reporters that some horses had gotten loose for a time but were later caught. At least 1,300 horses were stabled at Churchill, said vice president of racing Donnie Richardson.

Trainer William "Jinks" Fires had to find new living quarters for 24 horses in a barn that had part of its roof torn off. Water was knee-high in the barn after pipes broke.

Other trainers offered empty stall space for the horses he trains.

"Anyone who had an empty stall, we put 'em in," Fires said.

No damage has been reported at the nearby University of Louisville, which is sparsely populated at this time of year, said John Drees, a university spokesman. Elsewhere in the city, high water from the torrential rains briefly trapped a couple of people in their cars, and a hospital reported that it treated two patients hit by falling trees.

The worst damage, though, was concentrated at Churchill Downs, said Chris Poynter, a spokesman for Louisville Mayor Greg Fischer. Dozens of power poles went down near there and thousands were without power for a time.

The 137th Kentucky Derby, run this year on May 7, brought in a crowd of more than 160,000. The annual spring tradition, the first leg of horseracing's Triple Crown, is known as much for its mint juleps and fancy hats as racing.

The track, owned by Churchill Downs Inc., underwent extensive renovations in 2002 and 2003 totaling more than $200 million.

In August 2009, a flash flood heavily damaged the Kentucky Derby Museum, situated just off Gate 1 at Churchill Downs. The museum was closed for nine months while it underwent a $5.5 million renovation.

Storm sirens wailed in Kentucky's largest city as multiple tornado warnings were issued as the storm blew through.

"It looks like we dodged what could have been a really bad ... evening," Poynter said.