The billionaire mayor supports equality with words, but he helped the GOP retake the state Senate 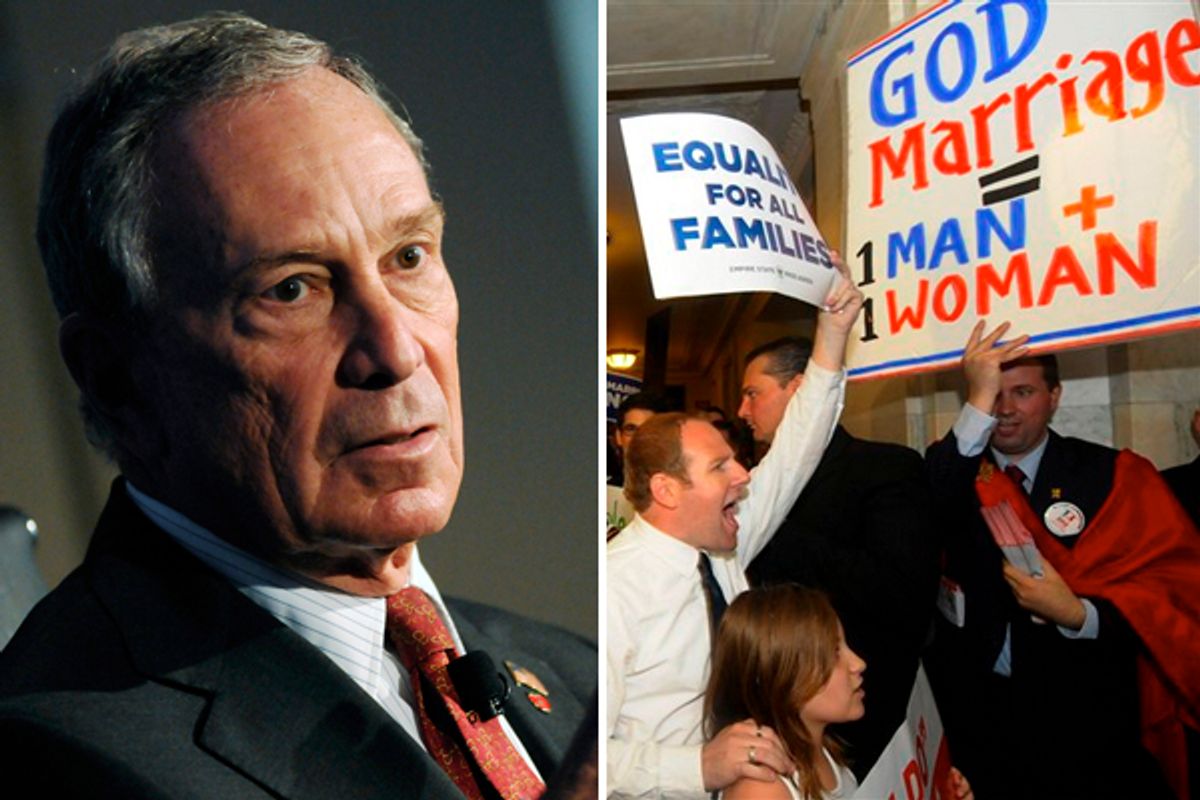 New York Mayor Michael Bloomberg has forcefully urged the New York state Legislature to pass gay marriage. He's spoken on it in public and lobbied for it in private. He clearly sees the equality fight as an important part of his legacy, and he's urged Albany politicians to do the same:

In his speech, Mr. Bloomberg said state lawmakers have a clear choice: "Do you want to be remembered as a leader on civil rights? Or an obstructionist?"

"On matters of freedom and equality, history has not remembered obstructionists kindly," the mayor said. "Not on abolition. Not on abortion. Not on women's suffrage. Not on workers' rights. Not on civil rights. And it will be no different on marriage rights."

Here's the situation in Albany right now: Marriage equality has passed the Democratic-led state Assembly, as it has multiple times in the past. It's stalled in the Senate, which, as always, is deadlocked. Tempers are flaring. Equality advocates now accuse Republicans of deliberately delaying in order to kill the issue without a vote.

The Republicans control the state Senate. An inability to attract one more Republican vote could doom marriage equality in New York for the foreseeable future. Democrats briefly controlled both legislative bodies in 2009, but the last election returned control to the Republicans, ensuring the legislative gridlock that has paralyzed the state for years.

And one guy has given more money to the New York Senate Republicans than anyone else: Mayor Michael Bloomberg. Bloomberg's money was instrumental in the GOP retaking the state Senate. While the "independent" mayor selectively donates to politicians on both sides of the aisle, Bloomberg clearly intended Republicans to retake the Senate, giving almost a million dollars to the Senate Republican campaign just before the election.

So the question for Mayor Mike is whether he's happy with what his money bought. There will most likely be a deal on a property tax cap -- helpful for rich guys like Mayor Mike! -- but the rights of gay New Yorkers are still up in the air. People have all sorts of different priorities, I guess.

Here's your third way politics: gridlock and obstructionism on everything besides measures that help out the wealthy.