Why would a Democratic legislature in a very blue state join the war on public unions? 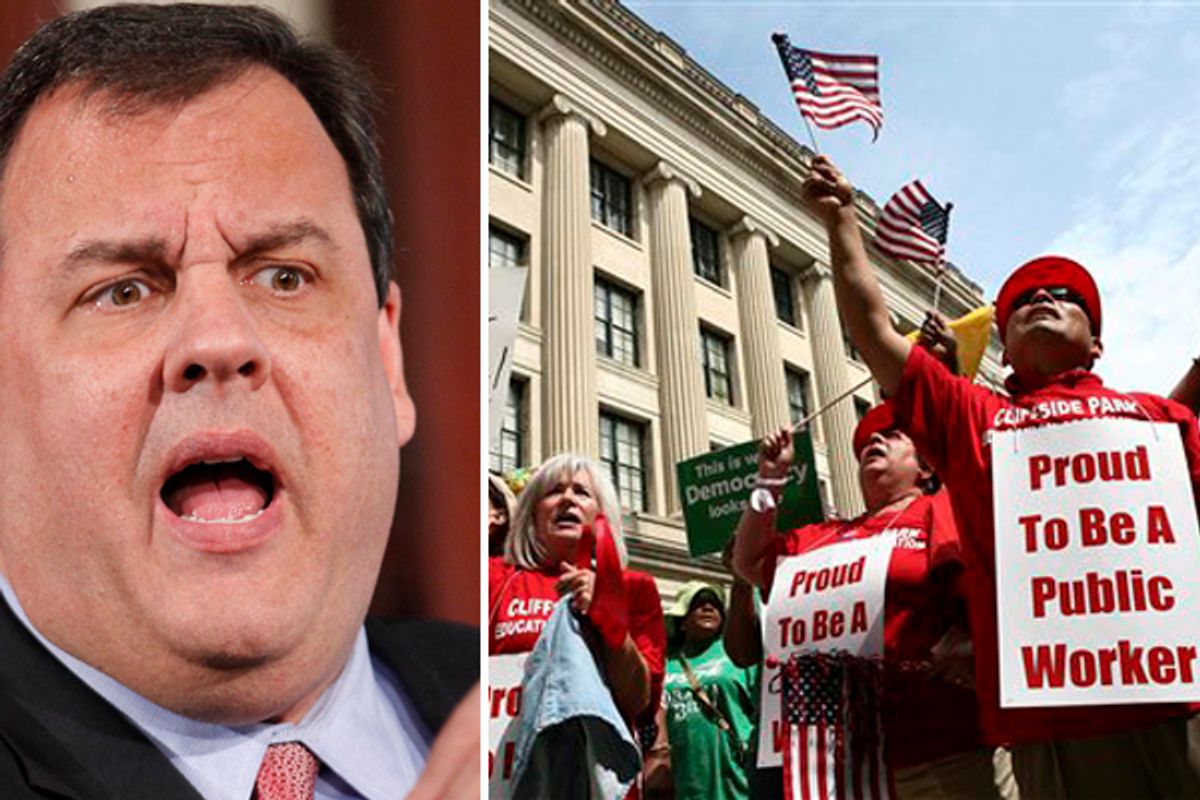 The legislation raises contribution levels and retirement ages and suspends cost of living increases for pensions. It also bans collective bargaining over healthcare for four years. All told, it will save the state an estimated $120 billion over the next 30 years, at a cost of thousands of dollars a year in additional expenses for the average public employee.

The money involved is considerable, but what makes this particularly remarkable is that it was approved by a legislature controlled by Democrats. As the plan worked its way through the state Senate earlier this week and then the Assembly, large crowds of public employees and their allies descended on Trenton in a scene that called to mind Madison, Wis., earlier this year. But unlike Wisconsin, where it was left to Republicans in both chambers to pass a bill that ended collective bargaining, in New Jersey the decisive margin was provided by Democrats.

"I've already had calls over the last 48 hours from some of the governors who have seen early press accounts of this and said, 'How did you do it?'" Christie told the New York Times on Thursday.

It's a fair question. Democrats in other states -- and in Washington -- have scored political points this year by defining themselves in opposition to the "extreme" agendas of Republican governors and legislators. And, to be sure, plenty of New Jersey Democrats are taking the same approach now, with many legislators taking to the floor this week to rail against what they branded an assault on worker rights. But eight of the 24 Democrats in the Senate -- including the chamber's president -- supported the pension and healthcare bill. And in the Assembly, 14 of 47 Democrats -- including the speaker -- went along.

The explanation has a little to do with policy. The state Senate president, Stephen Sweeney, a former union ironworker, was a leading critic of public employee benefit plans long before Christie became governor. And there is also wide recognition in the state's political and media world that when it comes to pension and healthcare costs, New Jersey is in worse shape than just about every other state and that the status quo just won't do.

But it's hard to ignore that the Democratic votes for the plan were not spread out geographically. Instead, they came from two very specific areas of the state: South Jersey and Essex County (which encompasses Newark and the areas around it). This is a testament to a cross-party political alliance that Christie developed and cultivated years ago, before he became governor and before he launched his war on public unions.

The thing to remember about South Jersey is that there's really only one name you need to know: George Norcross, an insurance executive and political boss who essentially runs the Democratic Party south of Interstate-195. Over the last two decades, Norcross has unified the county and local Democratic organizations in the region, mixing business and politics to transform them into lavishly funded machines. Norcross was instrumental in Sweeney's rise (he ousted a 28-year Republican incumbent to win his seat in 2001) and in the rise of just about every prominent Democrat from South Jersey.

A good friend of Donald Trump's, Norcross is not exactly an FDR Democrat, and neither are his protégés. He's not averse to cutting deals with Republicans. He had, by most accounts, a terrible relationship with Jon Corzine, Christie's gubernatorial predecessor, and his distaste for Corzine's Democratic predecessor -- Richard J. Codey -- is well-known in New Jersey. But he has a much better relationship with Christie. In fact, suspicions remain that Norcross and his operation went to sleep on Corzine in the 2009 election, producing underwhelming margins for the governor in key Democratic areas of South Jersey. Whether it's true or not, more than a few people in Christie's orbit believe this.

All six Democratic state senators from South Jersey -- including Norcross' bother, Donald -- voted "yes" on the pension and healthcare bill this week. Similar loyalty was evident among the region's Democratic Assembly delegation.

But Norcross' reach extends beyond South Jersey, to ... Essex County. Nine years ago, he threw his money and his muscle into a Democratic primary for county executive there. It was a bold move. Essex is a Democratic-rich county that typically produces the most votes in any statewide Democratic primary. And county politics is serious business, with all sorts of public contracts and patronage jobs on the line. By wading into the county executive's race, Norcross risked making powerful, permanent enemies in North Jersey.

But it was a calculated gamble; if he won, the payoff would be significant and long-lasting. And sure enough, he did, with his candidate -- Joseph DiVincenzo -- winning the primary and then (in a formality) the general election. Three terms later, DiVincenzo is still in office and the Norcross/Essex alliance is now the defining force in state politics. (It is widely believed that DiVincenzo's mentor -- a Newark boss named Steve Adubato Sr. -- went to sleep on Corzine in '09, just like Norcross.)

It was this alliance that elevated Sweeney to the Senate presidency two years ago, in a backroom deal that spilled onto the front pages at the height of the 2009 governor's race. As part of that arrangement, the Assembly speakership was handed to a member of the Essex delegation: Sheila Oliver, who has a second job (paying $83,000 per year) as a county administrator -- meaning that, essentially, she works for DiVincenzo. And, wouldn't you know it, Oliver and members of the Essex delegation provided the rest of the Democratic support for the pension and healthcare plan this week.

What this all means is that we ought not to read too much into what happened in Trenton this week. Yes, the reforms are significant -- there's no question about that. And yes, it's interesting that they're being enacted in such a heavily Democratic state, one that hasn't sent a Republican to the Senate in nearly 40 years. But the fact that Christie was able to score this victory tells us a lot more about the vagaries of New Jersey politics than about the national scene.

UPDATE: As an emailer notes, the Essex County Democratic delegation was not nearly as unified as South Jersey's. Whereas all of the Democratic senators from South Jersey voted "yes," only one of the four from Essex did -- Teresa Ruiz, who has close ties to DiVincenzo and Adubato. And only four of the ten Assembly Democrats from Essex were "yes" votes. This doesn't change the fact that Essex was a significant source of Democratic support for the benefits overhaul and that the Norcross/Essex alliance is a powerful force. But it does underscore that the Essex Democratic universe is more diverse than South Jersey's; DiVincenzo may be the biggest fish in the county, but there are other power centers with different agendas, too.