"Fuzzy Nation": Can a reboot bring back the "Fuzzies"?

A new book attempts to reinvigorate the classic science fiction series about a race of small, furry creatures 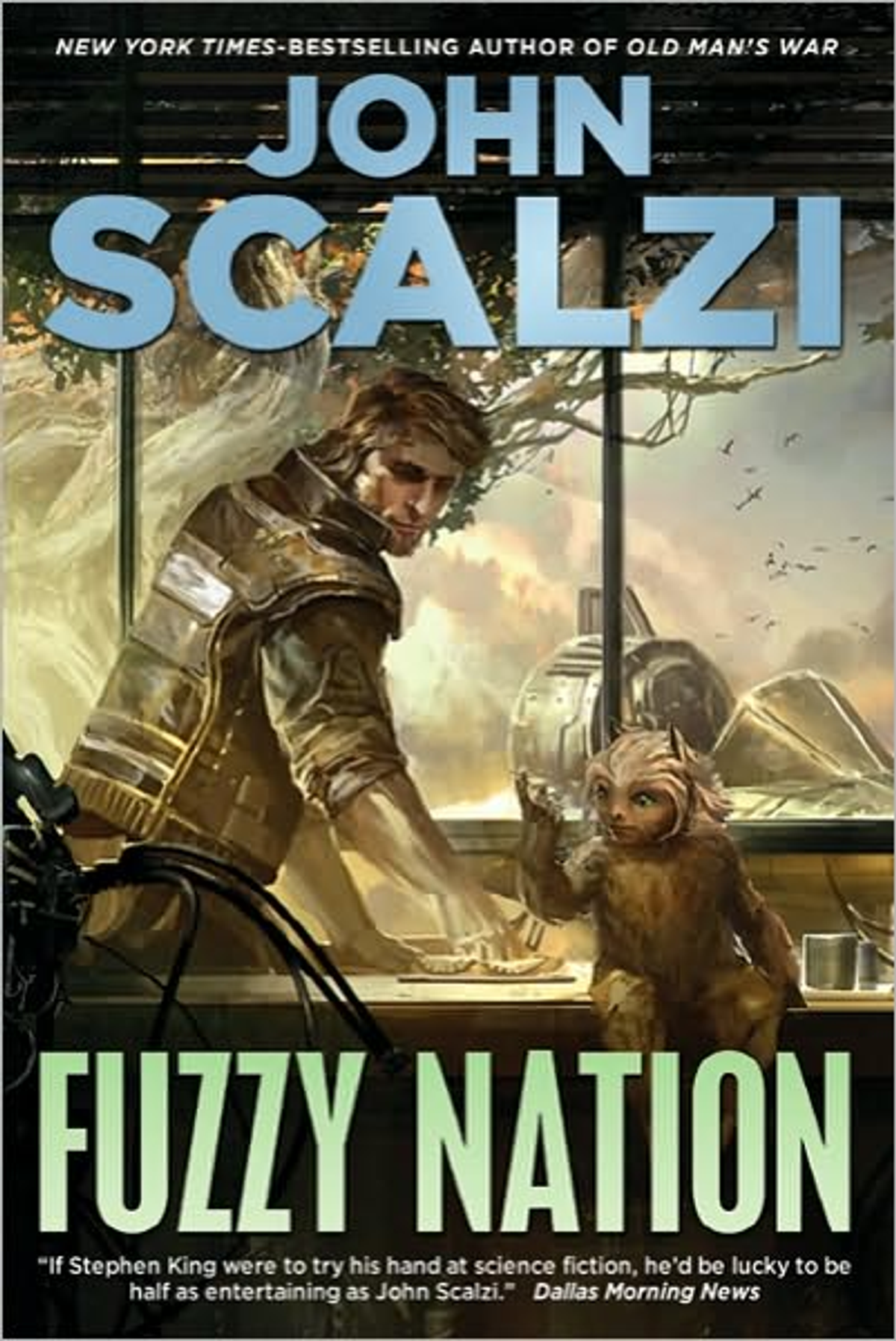 Although modern readers sometimes bemoan the commodification of popular fiction into literary franchises divorced from their original creators, the extension of fictional properties by other hands -- authorized or unauthorized -- extends back at least as far as 1870, when a variety of authors stepped forth to pick up the novel Charles Dickens left unfinished at his death, "The Mystery of Edwin Drood." The popularity of Sherlock Holmes ensured that post-Doyle continuations of his sleuthing by others, right down to the present day, would soon outnumber the canonical tales. James Bond lives on long after Ian Fleming finished with him, as do the subcreations of V. C. Andrews, Margaret Mitchell, and Robert Ludlum. And of course, a flourishing factory for Jane Austen sequels, monsterized or naturalistic, churns out product.

Generally speaking, all of these "sequels by other hands" respect the canonical works, using the originals as a bible or springboard. The new exploits might fill in the hidden past of the characters, or extend their adventures into the future of their timelines, or even laterally, but they generally hew to the "facts" and personages as laid down by the original creators. Oftentimes there is even an explicit continuity manual for the franchise, especially in high-earning, multi-tentacled enterprises such as "Star Wars."

But everything sacred about a beloved literary property is up for play in a "reboot."

With the metaphor drawn from a restart of a computer's operating system, the reboot takes a formerly popular or declining property of a certain vintage, strips it down to what the rebuilders esteem as its core characters and tropes, and rebuilds the franchise radically for a contemporary audience. The most famous and successful instances in recent times are probably J. J. Abrams' "Star Trek" movie, the SyFy channel's "Battlestar Galactica," and Christopher Nolan's "Batman Begins." (The most horrifyingly doomed instance is surely Frank Miller's "The Spirit" film.)

The invention and appeal of the modern reboot -- or, to use the older, pre-digital term, "relaunch" -- can be laid at the door of the comics field, and specifically to one man, DC Comics editor Julius Schwartz. In 1956, Schwartz got the brainstorm of taking the 1940s Golden Age character the Flash and refashioning his back story, personality, milieu, and cast of supporting characters for a new set of readers. The resulting relaunch was so successful that others quickly followed -- Green Lantern, the Atom, Hawkman -- and the Silver Age of comics was born.

In the world of prose science fiction, however, reboots have been sparse. The sanctity of original texts is paramount among fans. While SF works might become dated in their details, as once-distant scenarios turn into yesterday's tomorrows, readers are used to making mental adjustments to compensate, and so feel no need for reboots. And while readers might tolerate and enjoy extensions of the canon, radical rethinking of a property is less welcome.

Leave it to John Scalzi, contrarian, genre aficionado and bold pioneer, to attempt such a thing, and upon one of the field's best-loved franchises, H. Beam Piper's Fuzzy saga.

H. Beam Piper (1904-64) was a popular author in the second tier of SF writers during the mid-twentieth century. A tragic figure dead by his own hand when faced with seemingly inescapable penury, apparent career stagnation, and a bad divorce, Piper published two novels during his lifetime about a race of charming aliens known as Fuzzies: "Little Fuzzy" in 1962 and "Fuzzy Sapiens" in 1964. A third, long-lost entry, "Fuzzies and Other People," was posthumously issued in 1984.

"Little Fuzzy" is cleverly constructed, compact, masterful, lighthearted yet dramatic, an average-guy-fights-corrupt-establishment tear-jerker that also manages to deal with deep philosophical and neurological issues still current today: what constitutes consciousness and sapience, and how do we recognize it?

On the corporate-run planet Zarathustra, vigorous 70-year-old prospector Jack Holloway is the first human to encounter the Fuzzies, 2-foot-tall furry humanoids migrating to escape human-induced climate change. Novice readers might picture the Ewoks from "Star Wars," with some of the appealing qualities of Tribbles ("Star Trek"), Hokas (Poul Anderson and Gordon Dickson) and Schmoos (Al Capp) thrown in for good measure. Holloway adopts a family unit of the smart and neotenically appealing Fuzzies, becoming their "Pappy Jack," and is soon embroiled in a fight to prove their status as fully aware beings, with a colorful cast of supporting players on both sides of the battle. Gunplay and courtroom drama alternate, with Holloway and the Fuzzies emerging triumphant.

The sequel, "Fuzzy Sapiens," picks up the story just a week later. Holloway and posse are running Zarathustra, but the corporate crowd still has designs on the world. Yet, to everyone's surprise, bad guy CEO Victor Grego proves susceptible to Fuzzy charm and adapts to the new regime. The intersection of idealism and commerce is leavened with suspense from a criminal enterprise employing mistreated Fuzzies, and the puzzling "genetic trap" of their reproductive capacity.

The two decades after "Fuzzy Sapiens "saw a brace of reader-demanded sequels by other hands: "Fuzzy Bones" by William Tuning and "Golden Dream: A Fuzzy Odyssey" by Ardath Mayhar. Then came the belated discovery of "Fuzzies and Other People," which recast the continuity as Piper had originally envisioned. Four months have passed since the prior adventure. The Fuzzies are attending school, and are heirs to Zarathustra's sunstone riches. Meanwhile, the humans debate issues of paternalism, cultural contamination, and hybrid vigor. The book ends with the Fuzzies as "permanent children," affectionate soul mates for humans. Not pets, of course, but not quite peers.

Enter Scalzi. On his widely read blog, the author confessed that he wrote his reboot without any guarantee of publication or approval from the Piper estate, strictly out of love for the franchise and a desire to re-engineer it for a new generation of readers.

Where did those impulses take him and the Fuzzies exactly? And was this trip necessary?

"Fuzzy Nation" opens with Jack Holloway prospecting with his dog, Carl, in the wilds of Zarathustra, and discovering an unprecedented motherlode of sunstones by accident. He returns, naturally somewhat elated, to his lonely cabin, where he encounters and interacts with the first Fuzzy intruder, who subsequently takes off, leaving Jack free to visit his ex-girlfriend Isabel Wangai, planetary biologist, in the nearby town. In short order, a family of "Fuzzys" (Scalzi's preferred spelling) is camping out in Jack's home, Isabel is doing fieldwork to vet them for sapience, the nasty scion of the Zarathustra corporation is pressuring Jack to ally himself with the company against the Fuzzys, and a judicial hearing is underway to determine whether the Fuzzys merit further investigation as possible sentient natives. The hearing goes in favor of the Fuzzys, which triggers nasty covert reprisals by the corporation -- these in turn met by derring-do and cunning on the part of Jack and his friends. In the end, the Fuzzys are established as sentients, and the planet is theirs, with suitable rewards for Jack.

Taken solely on its own merits, "Fuzzy Nation" is a jim-dandy, thought-provoking thrill ride. Readers will race through this novel and demand more at the end. Scalzi possesses a writing style that is seductively transparent but which yields a distinctive voice. You cannot mistake his work for another's. His potent affect of glee and knowingness, humility and bravado, respect and irreverence, always comes across. He sets up his alien world economically, taking Piper's premises from a generation or two back and kitting them out for twenty-first-century realities. He populates his lived-in world with real humans who engage in real conversations. He moves the plot along in a sprightly manner and whips out his big surprise in a climactic trial scene. His speculative elements are modest yet sound -- barring his fudging of faster-than-light communication in a pivotal courtroom scene. This book does no dishonor to its predecessor and will provide plenty of enjoyment to readers who might never have encountered the original.

And yet, I find myself unable to like "Fuzzy Nation" as much as I like "Little Fuzzy." "Little Fuzzy," it seems to me, is the Saturday Evening Post, and "Fuzzy Nation" is DreamWorks. One is gold and one is bronze. That reaction certainly says more about me than about the book. But let me catalog the differences between the two books that illuminate what has been abandoned. (It's all down to the shifts in culture since 1962, of course.)

First and most consequentially comes the change in Jack Holloway. Gone is the 70-year-old, incorruptible, ornery loner worried about his fading physical prowess. (Yuck! A hero with gray hair!) In his place is a healthy young Han Solo rogue and scamp given to situational ethics and a hearty self-interest. Let's call him Jack2. Jack2's personal stake in the matter of Fuzzy sapience -- if the Fuzzys aren't sapient, he'll earn billions, a temptation Jack1 never faced -- distorts all the moral gravitas of the cause. Jack2 ultimately does the right thing, acknowledging his mixed self-nature and the dicey way he played the game in a closing speech, but that is not sufficient to restore the moral compass.

The reader might say that such a presentation is simply more realistic, in line with the grey nature of the world. But actually, "Fuzzy Nation" ends up being a much more black-and-white rendering of reality than its template. Because Jack2, our antihero, is already ethically compromised, his enemies, to appear worse, have to be 100 percent bad! It makes no sense for Han Solo to fight his exact counterpart, another shifty, likable mercenary; they'd probably just strike a deal. Han Solo needs a Darth Vader, which is provided by cruel, greedy, and effete scion Wheaton Aubrey VII and his henchmen -- a far cry from amenable-to-reason Victor Grego.

Consider Piper's original series, where even the worst character, the murderer of Fuzzies Leonard Kellogg, had a change of heart and actually committed suicide out of guilt. His counterpart here, Joe DeLise, exhibits no such depth. This offloading of partial complicity onto a fallible hero renders the tale much less idealistically stirring. But again, that's SatEvePost versus Spielberg.

Ramping up the noise level and the slapstick (the Fuzzy First Family engages in "Three Stooges" antics) and the smart-assery is likewise consistent with the current model of Hollywood-influenced storytelling. Moments of quiet or reflection or meditation are forgone in favor of quips and fistfights, and a plethora of such. "Fuzzy Nation," covering the same story arc, is almost twice as long as "Little Fuzzy," in the manner of all genre novels these days. I make no assertion as to which mode is superior; fashions in storytelling come and go. But I do assert a difference in the way such a story is internalized.

Finally, the Fuzzys themselves. They are not presented as tool users, a part of their original charm and an essential portion of their Piper identity, solely so that Scalzi can get in his big reveal. We are not privy to their stream-of-consciousness as we were in Piper's books, another distancing factor. And their place in a disturbed ecosystem is less clearly portrayed and felt. Finally, there is Scalzi's explicit linkage of Fuzzies and cats. I can't swear to it, but I'm willing to bet Piper never used the over-obvious word "cat" once in three books. The Internet fetishization of felines leaks over into this novel, rendering the Fuzzys closer to an Internet meme than to the inheritors of an alien magisterium.

As with all SF, "Fuzzy Nation" reveals more about the present year of 2011 than it does about some probable future, just as "Little Fuzzy" disclosed the essence of 1962. Which world you prefer to visit is up to you, but Scalzi offers us the choice.