Is Rand Paul as dumb as he sounds?

Or is the senator from the Tea Parties putting on an act? 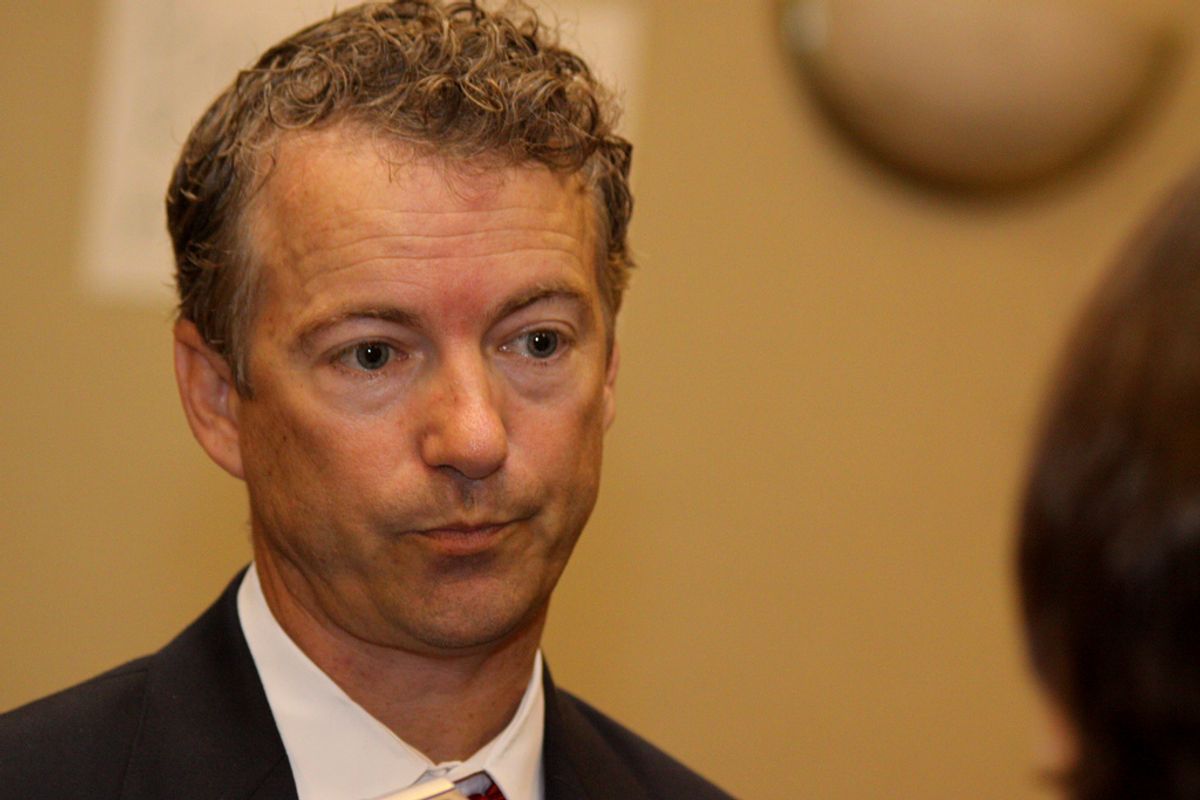 Here, via Oliver Willis and Steve Benen, is a clip of Sens. Al Franken, Bernie Sanders and Rand Paul discussing a bill that would help prevent senior hunger:

As Sanders and Franken explain: If we make sure old folks have money for and access to adequate nutrition, fewer of them will need to be hospitalized or placed in nursing homes. Because Medicare would pay a lot more money for hospitalization or nursing home care than it would cost to make sure these old folks don't go hungry to begin with, this program is cost-effective in addition to being humane.

Here is Rand Paul's rebuttal: "It’s curious that only in Washington can you spend $2 billion and claim that you’re saving money." Then he went "hyck hyck hyck" and looked sort of smug. When the basic idea -- sometimes spending a bit of money now saves a lot of money later! -- was explained to him again, his response was to say something about the government being bad, and to suggest that if this insane magical spending-to-save thing is true, why not spend a ZILLION dollars feeding old people? (The cheapest option, I guess, would just be to not pay for old people to eat or go to the hospital at all, and to let them die in their homes and be buried in pauper's graves, but it is maybe rude to suggest that that is Paul's "plan.")

Rand Paul is either presenting a misleadingly simplistic argument because he knows it will appeal to dumb conservatives (only a big-city liberal would think you could save money in the future by spending it wisely in the present!) or he's actually as dumb as I have always said he is.

He's obviously some combination of willfully obtuse and dimwitted, but how much of his dimwitted is calculated?

Like, for example, when he said he wanted to shut down the Department of Education because of "the idea of somebody in Washington deciding that Susie has two mommies is an appropriate family situation," he was obviously being an inflammatory bigot asshole, probably because he thinks his constituents are backward hicks who eat that kinda shit up. But does he also not actually know what the Department of Education does? Because they have no say in curricula!

And oh, also, when he said he would filibuster every budget that wasn't balanced, was he just making stupid and unrealistic promises because, again, he has no respect for the intelligence of Kentucky voters, or did he actually not understand that senators can't filibuster budgets?