Primer: Syria heats up even more 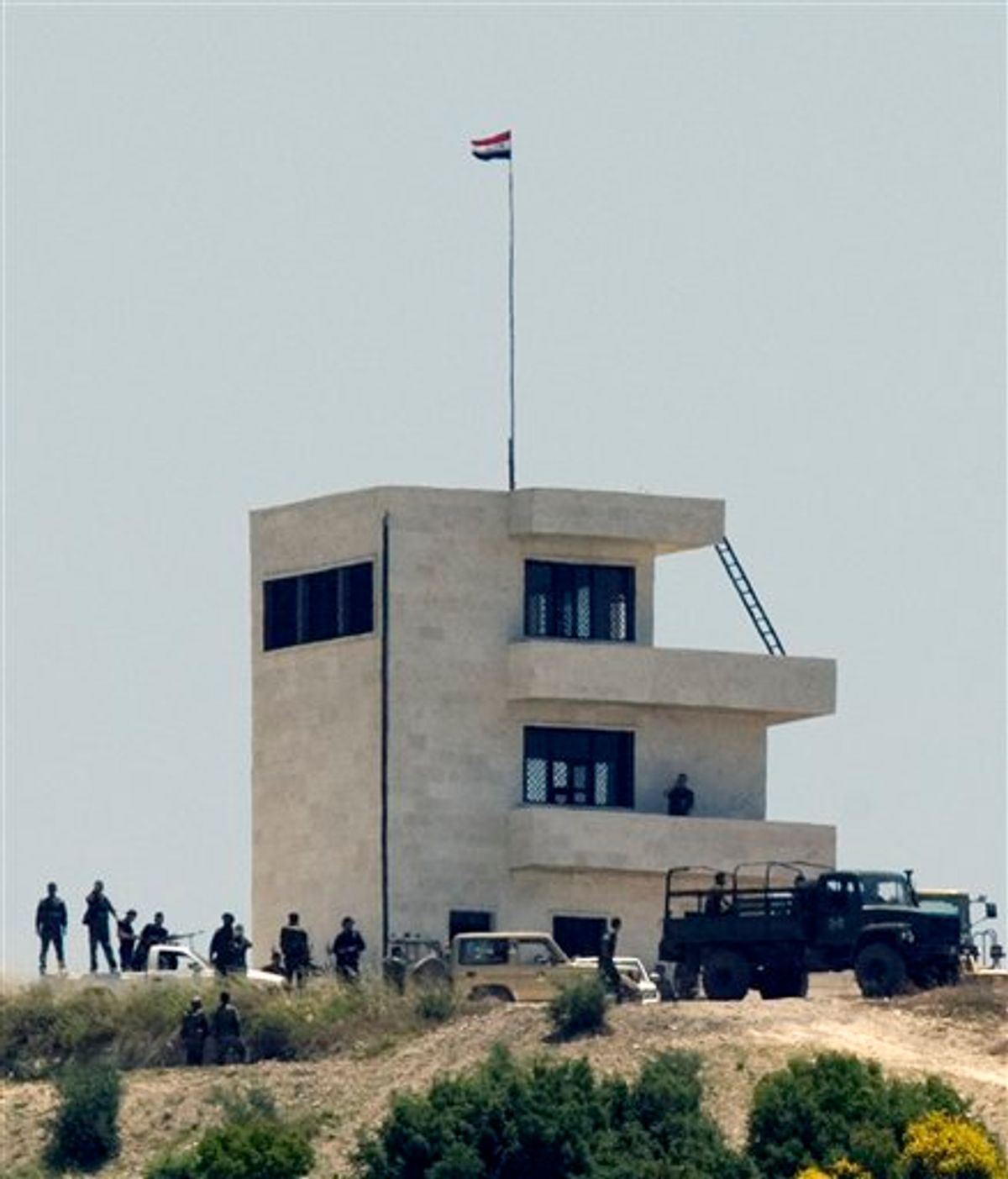 Syrian troops arrive at a hill overlooking Turkey-Syria border, about three kilometers inside Syria, as Syrians waiting to enter Turkey rush to the crossing point near the Turkish village of Guvecci in Hatay province, Turkey, Thursday, June 23, 2011. Syrian activists claimed that troops backed by tanks and snipers have entered a village along the Turkish border as the regime expands its crackdown on a pro-democracy movement that has posed the gravest challenge to President Bashar Assad's rule(AP Photo/Burhan Ozbilici) (AP)
--

Anti-government protestors in Syria, urged by activists, once again took to the streets Friday after prayers, with demonstrations spreading through Aleppo, the country's second city (which has been referred to by Al-Jazeera as a "sleeping giant"). Since the brutal crackdowns began mid-March, a reported 1,300 people have been killed, many thousands more detained and over 10,000 have fled to refugee camps across the Turkish border.

Syria's second city begins to erupts: Protests in Aleppo have been mild and infrequent compared to demonstrations in Damascus, Homs and numerous border areas and coastal towns like Latakia. However, actions in the streets could indicate a turning point for president Bashar al-Assad's regime.

"If Aleppo were to rise up, it would mean that one of the metrics by which the West is charting the fall of the Assad regime would have been met," said Andrew Tabler, a Syria expert at the Washington Institute for Near East Policy told Al-Jazeera.

The Guardian posted footage Friday from a peaceful Aleppo protest:

Turkey: Friday's actions are in response to Syrian troops' movement this week close to the Turkish border, which also prompted a response from U.S. Secretary of State, Hillary Clinton. She said:

We are very concerned by the reports that the Syrian military has surrounded and targeted the village of Khirbet al-Joz, which is located roughly 500 meters from the Turkish border... If true, that aggressive action will only exacerbate the already unstable refugee situation in Syria.

Lebanon: The Turkey-Syria border is not the only area where troubles are spilling over to neighboring territory. As the Christian Science Monitor reports:

Since Syrian opposition protesters took to the streets in mid-March, Lebanon has suffered a spate of security incidents. Most recently, six were killed in June 17 clashes between Tripoli's Sunnis and Alawites, a splinter sect of Shiite Islam which also forms the backbone of the Syrian regime.

The EU also drafted a declaration -- expected to be endorsed by European leaders -- condemning the "unacceptable and shocking violence the Syrian regime continues to apply on its own citizens." The declaration in full, including allegations about the revolutionary guard's involvement in crackdowns, is available as a pdf here.